From My Nature Journal: "And the Shepherds Returned..."

“And the shepherds returned, glorifying and praising God for all they had seen and heard…”

I won’t keep you long today. Along with many of you, I am with family celebrating the season for the next several days: Gail and I came to Seattle last night, where we’re able to see three of our four kids and their families. But I realized after a busy week that tomorrow is my typical blog day.

So I’m thinking of Luke 2:20, the verse in italics above. I love this verse. Of course, it must have been quite a sky phenomenon the shepherds observed earlier that night. I’ve done a good bit of natural observation of the sky myself, but this one was supernatural, complete with herald angels announcing a paranormal birth and the very address where this special child could be found. And it ended with the announcement that this birth was not just for the shepherds’ benefit but for that of the entire world: “…and on the whole earth, peace to all those of good will.” So they went and found Jesus, and came back changed.

I confess: time and again I return from a
hike or saunter glorifying God for all I
have been able to see and hear…

What also strikes me is that this verse could also be the Christian naturalist’s manifesto. With the sincere hope that such an interpretation does not in any way trivialize the text, I truly confess: time and again I return from a hike or saunter glorifying God for all I have been able to see and hear. A favorite Celtic blessing I’ve often used includes the words: “…May God bring you back rejoicing at the wonders he has shown you.” That picks up the same theme.

As our week in the Northwest progresses, I will enjoy some walking among the spectacular trees we find here, far larger yet far younger than those we find in the arid mountain west, and will return from those jaunts rejoicing at God’s wonders. And after celebrating Christmas vigorously with most of my beloved progeny, next week I will return home doing as the shepherds, glorifying and praising God for all I have seen and heard.

POTM...*: Way Better than the Miracle on 34th Street 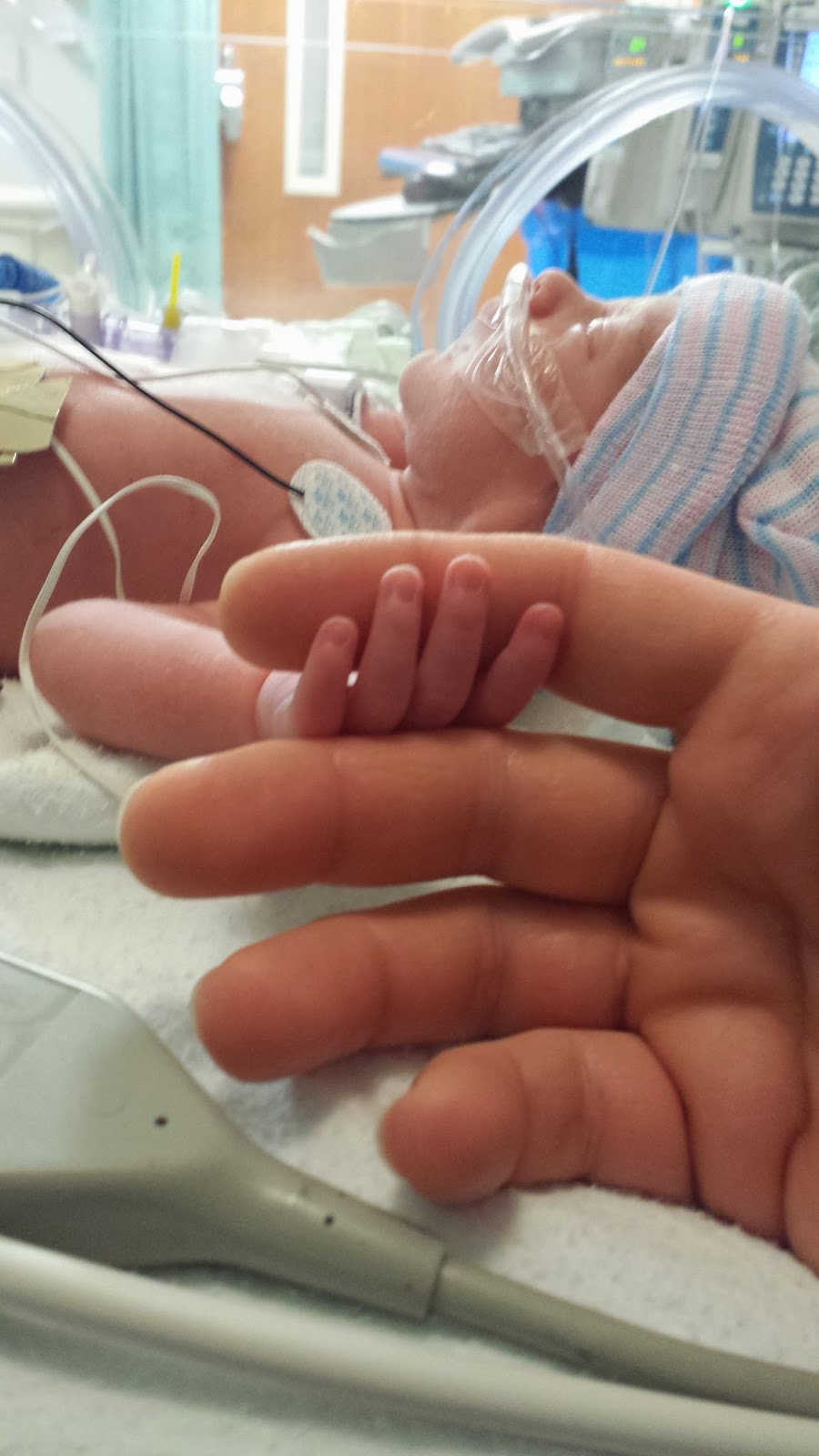 Last month here in New Mexico, I did something I hadn’t done in years – I baptized a newborn baby. These many years as an administrative exec in the Covenant denomination have not allowed that blessed opportunity very often, which was so frequently mine as a local pastor years ago. But now I’m serving in transitional ministry back in a local church; so imagine my delight to be asked by members to officiate their daughter’s baptism! To make matters even better, this coming Sunday we are doing three baptisms by immersion in the church, two on new confession of faith. I feel like I have died and gone to heaven.

Baby Ruth was born back in June nearly eight weeks early, at a slight three pounds and thirteen ounces. Since then she has grown amazingly, to the point where she now seems to me on par with others her age, a lovely and dimple-smiley little one who charmed the worshipers the day of her baptism. During a visit several months back, her father showed me a photo I fell in love with; I asked for a copy thinking I might use it on my blog some day. When I came across it this week it arrested me, and spoke loudly that it was to be this month’s photo of the month.

For one reason, it reminded me of the miracle growing inside my second daughter, her first child. Sarah keeps an app on her phone that tells her how large her and BJ’s baby has grown in comparison with a fruit or vegetable: this week s/he’s a sweet potato. Now, I have seen some enormous and some small potatoes of the sweet variety, so I’m not sure how this particular app figures these things out. But what do I know? I just accept it and chuckle. The day Sarah told us, two and a half months ago, the baby was but a pecan…

But of course, there’s another reason why the photo has struck me, why I’ve found myself snatching views of Ruth this week and contemplating her incredible beauty and the wonder of her existence. We are thinking much these days about another baby, born also in something of emergency circumstances, but without the same sanitary hospital appurtenances, to an unwed teenaged mother and a mystified surrogate father in humble, obscure and unheralded conditions. Yet, all the world over, this child’s birth is celebrated this coming week. Faith in this baby, “…born a child and yet a king…” according to the Advent carol Come Thou Long Expected Jesus, has become the center of my life and that of countless others.

So I commend this child to your consideration, he who would become the Prince of Peace -- for the world, for me, for Ruth, for you.

With a nod to Gene Autry (whoopie-ti-yi-yo…), I’m ‘…back in the parish again.’ In the ministry call I’ve recently completed, Christmas and Easter were actually a slower time of year: administrators don’t tend to get many calls when pastors and churches are extremely busy. But this year it’s different; I’m doing transitional ministry work in a church in New Mexico among a wonderful group of people we’ve come to love, so am doing Advent preaching and leading a Christmas Eve worship for the first time in nineteen years. It feels great and I am as happy as can be!

But it also feels extremely busy! I’ve been trying to snatch some moments of quiet and solitude in the midst of the frenetic pace, of which, I confess, most is our very own doing. So I’m reading again through Ruth Haley Barton’s Strengthening the Soul of Your Leadership, and I come across this quote in chapter three the night before last, underlined from the first time I read the book:

The quote zinged (zung?) straight to my heart, and so, along with certain scriptures, I’m meditating these last thirty-two hours on these words as well. It also seemed a good quote to share today through this blog for your blessing as well. Don’t we need this reminder again and again? I sure do.

So, given the pace, I’ll keep this short and sweet today. But one more thing before I go: if you’ve the chance and are outdoors this weekend in unfrozen conditions, grab a jar with a lid before you go, stop alongside some waterway, dip the jar low into the stream or lake bed near the shore and scoop up some water and mud. Then bring the jar home, find a quiet place at some point in the next several days to sit and pray, shake up the jar, and set it down before you. Sit there long enough to let it settle while contemplating the gifts of God. Be blessed.

From My Nature Journal: "Picture a Tree..."

Hmmm… I'd never been asked that before. Quickly prone to self-deprecation as I am, it was easy to speedily imagine some spindly little something as representing me: a scrawny, stressed and misshapen trunk; haphazard and broken branches; and leaves that look like they have just been beaten down by a hailstorm or chewed on by tent caterpillars! But I knew this was not accurate. God does not view me so. And even if it were an accurate 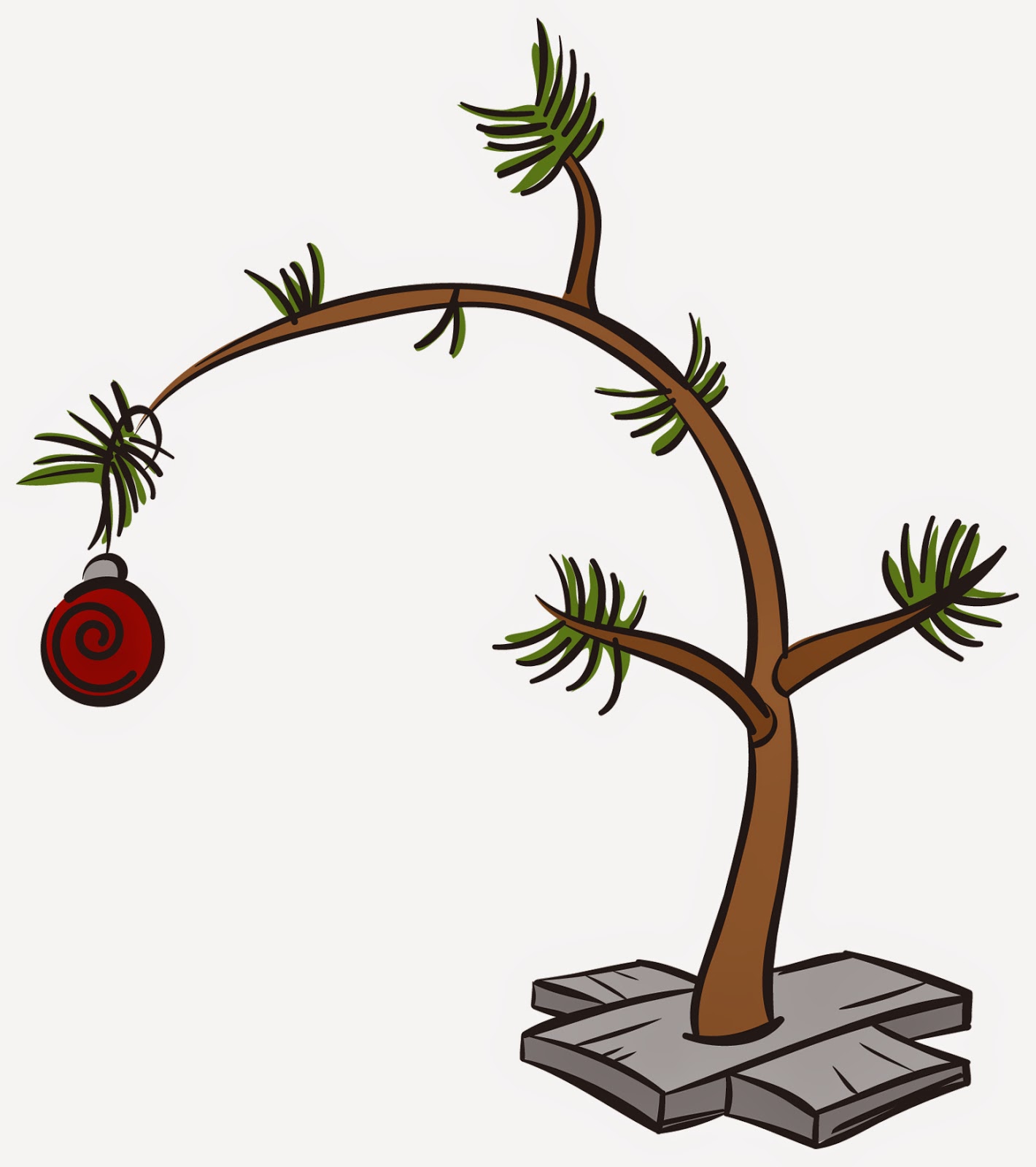 portrayal, there’s always the parable of the Charlie Brown Christmas Tree, where that spindly little something is transformed by one’s (in my case, God’s) love, devotion and delight into a thing of absolute beauty.

So I pictured a mighty oak, a worthy specimen to be sure, an image of certain strength and character. There’s even an attractive scripture from the prophet Isaiah, “So they will be called oaks of righteousness, a planting of the LORD that He may be glorified (Isaiah 61:3).” But somehow I did not feel like an oak. It’s not that I do not seek to be righteous with all my heart, but a depiction as a sturdy oak belies my insecurities, feels ostentatious, or for some
reason at least just did not feel right.

Trees more frequently mentioned in the Bible are the Cedars of Lebanon. They, too, are noted for their strength, but also for their use as gifts from kings to kings, referenced to infer beauty and lavishness as a building material, and even cited for their fragrance. That latter image is a nice one: I have often desired to be found pleasantly fragrant to the Lord, a ‘sweet-smelling sacrifice’ as the scriptures say. But even that title, “CEDARS OF LEBANON” (stated in low, dramatic tones), seemed to denote an exotic quality from which I retire.

What else? I find in the Bible references to numerous fruit trees (date, fig, olive and apple), and not infrequent mention of the ordinary sycamore, always seemingly spoken of in almost pedestrian, unspecial fashion. These are the common trees, widespread. No, I don’t see myself as a fruit or sycamore. Not sure why… Maybe it’s the ridiculousness of the old pseudo-psychological question, “If you were a fruit, what kind would you be?!?” 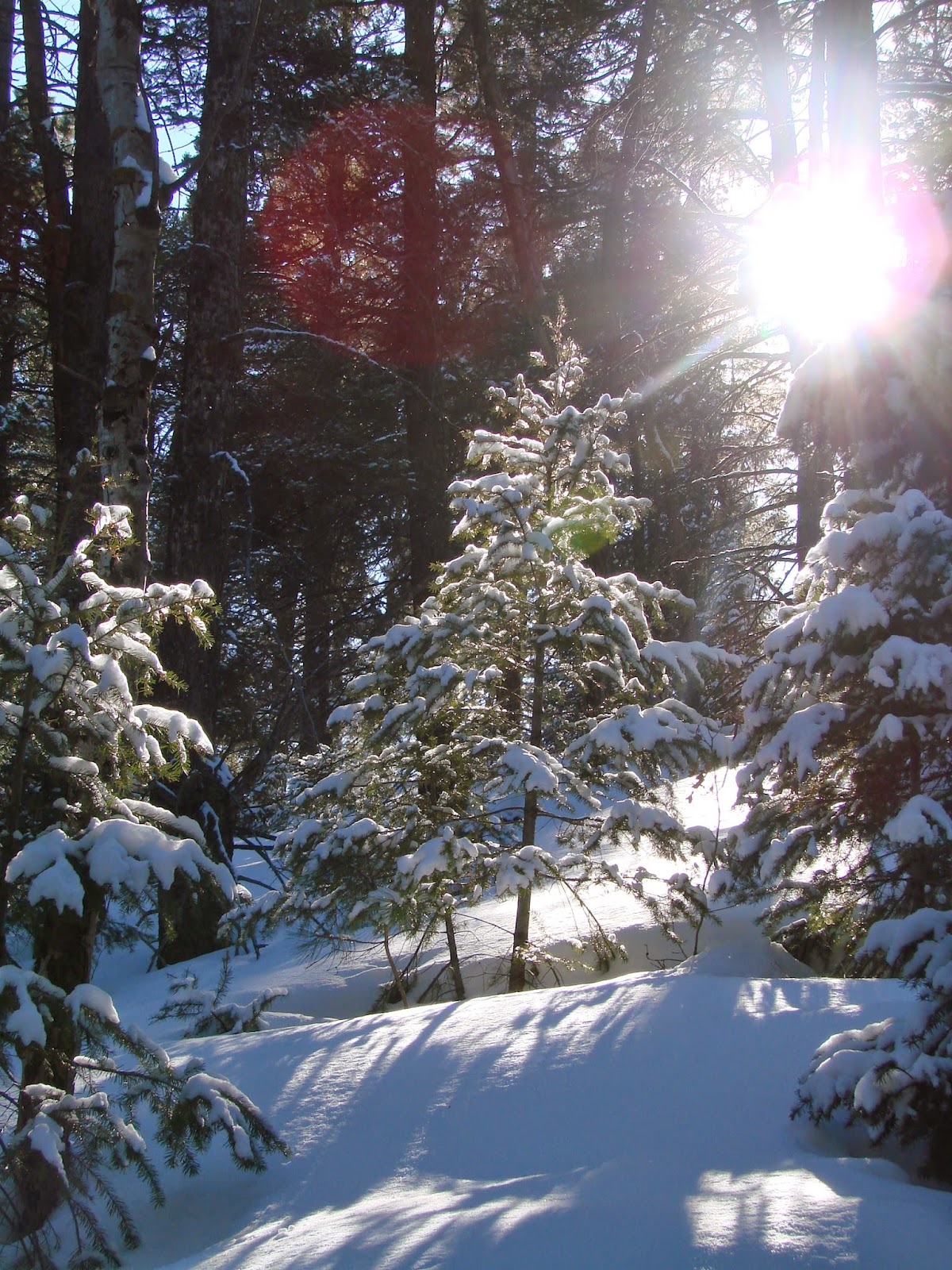 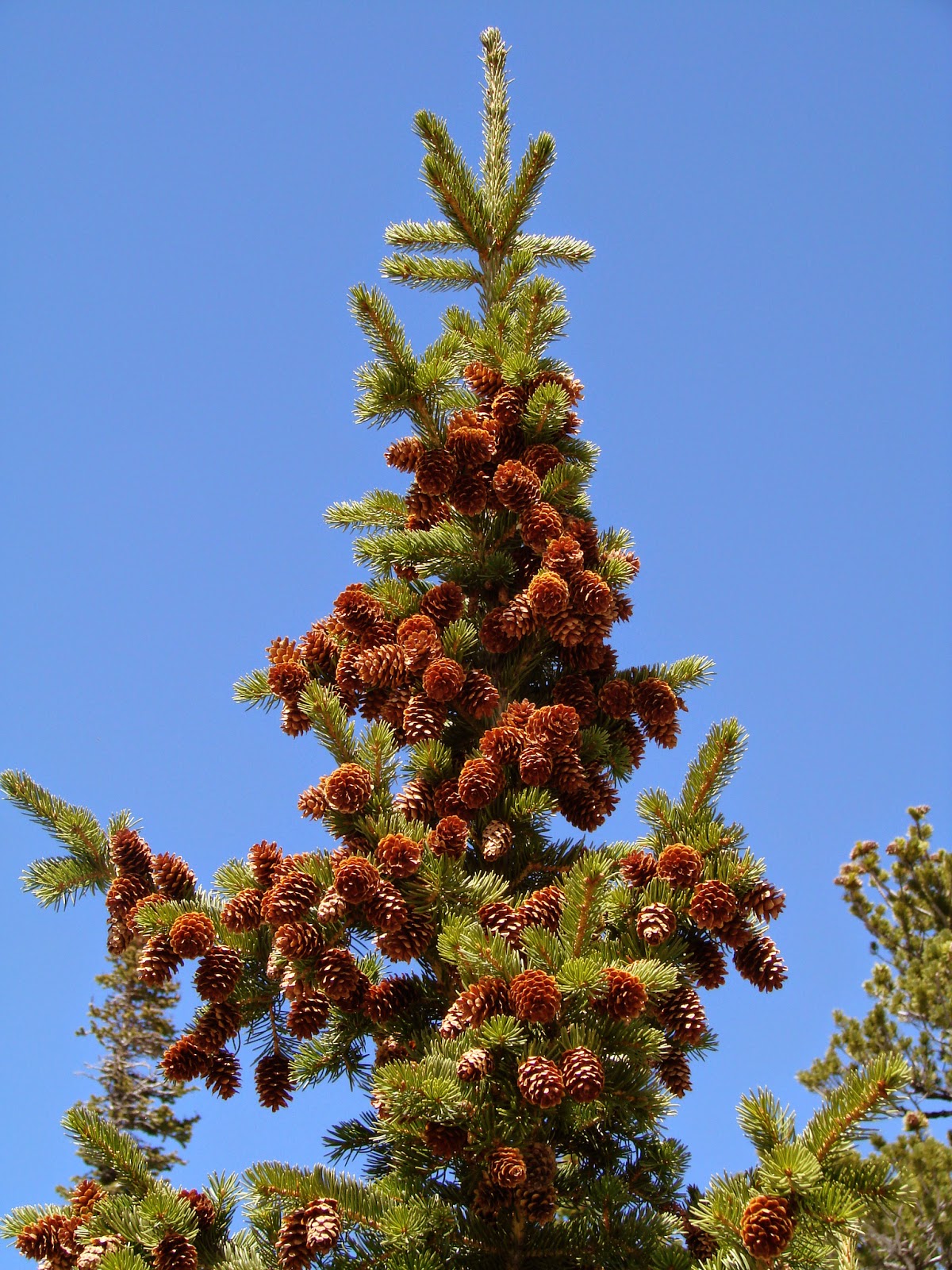 As I thought of it, the tree I saw in the Bible as most attractive is the one I often find similarly so in my life today: the ordinary conifer pine. It is referenced in scripture as a good building wood, and so it is known today. It is ubiquitously utilitarian, easily worked, just appreciatively and enthusiastically used. I so desire to simply be spiritually used, utilized, employed, made use of. But there are many other things about the conifer that are appealing. It’s an evergreen, giving off a celebration of verdant life even in the bleakest of seasons or moments. It provides constant and consistent shelter for creatures that would take refuge within or beneath its boughs. It’s pleasant to the visual, aural and olfactory senses. It holds up in storms far better than hardwoods -- accommodating forceful winds, or bearing tremendous weights of snow and ice -- bending but usually not breaking. And, not only physically but figuratively, evergreens have long been held as symbols of fertility, of birth, even now associated by implication with the incarnate birth of Jesus Christ, Christmas...
I want to be known as
a mighty evergreen... 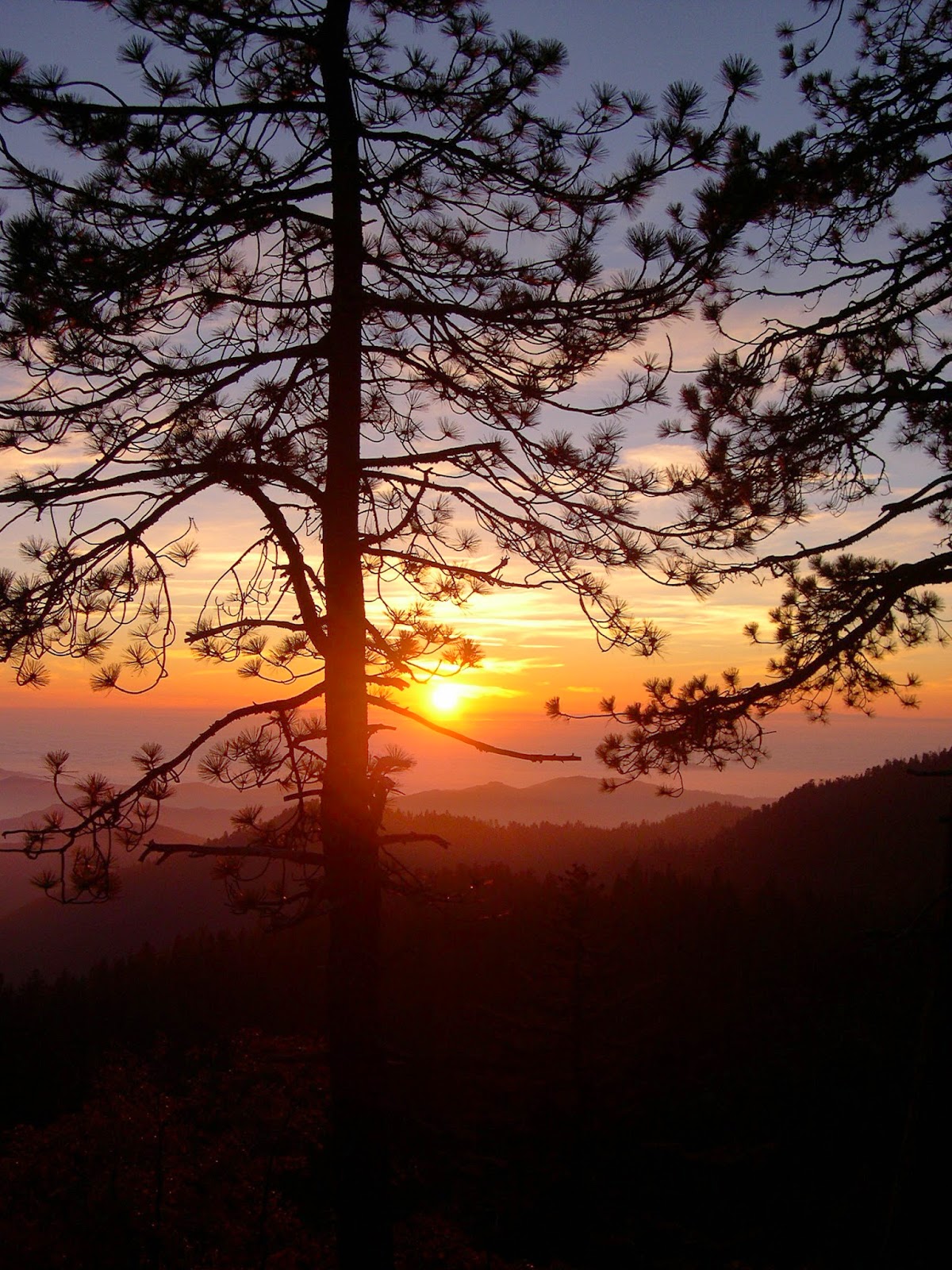 But there’s one characteristic I like best: it stands with its brothers. In the untouched natural world, one does not find large pines, or large conifers in general, growing in isolation from each other. They grow in groves. Why? Because of an interesting physical trait: conifers have no taproot, and their entire root systems are quite shallow, so their roots intertwine with those of others and they use each other for support. That’s why landscape-planted ones are commonly seen uprooted in city front yards after windstorms; they’re not meant to be growing alone. They grow in groups, and almost seem in the process to produce a quiet sanctuary as sound is dispersed by the needles, with even a soft footfall beneath. Is it any wonder that primitive humans often considered evergreen groves sacred places? Quiet. Reverent.
A soft place to lie down. Pleasant to the senses. A hush from the
world... 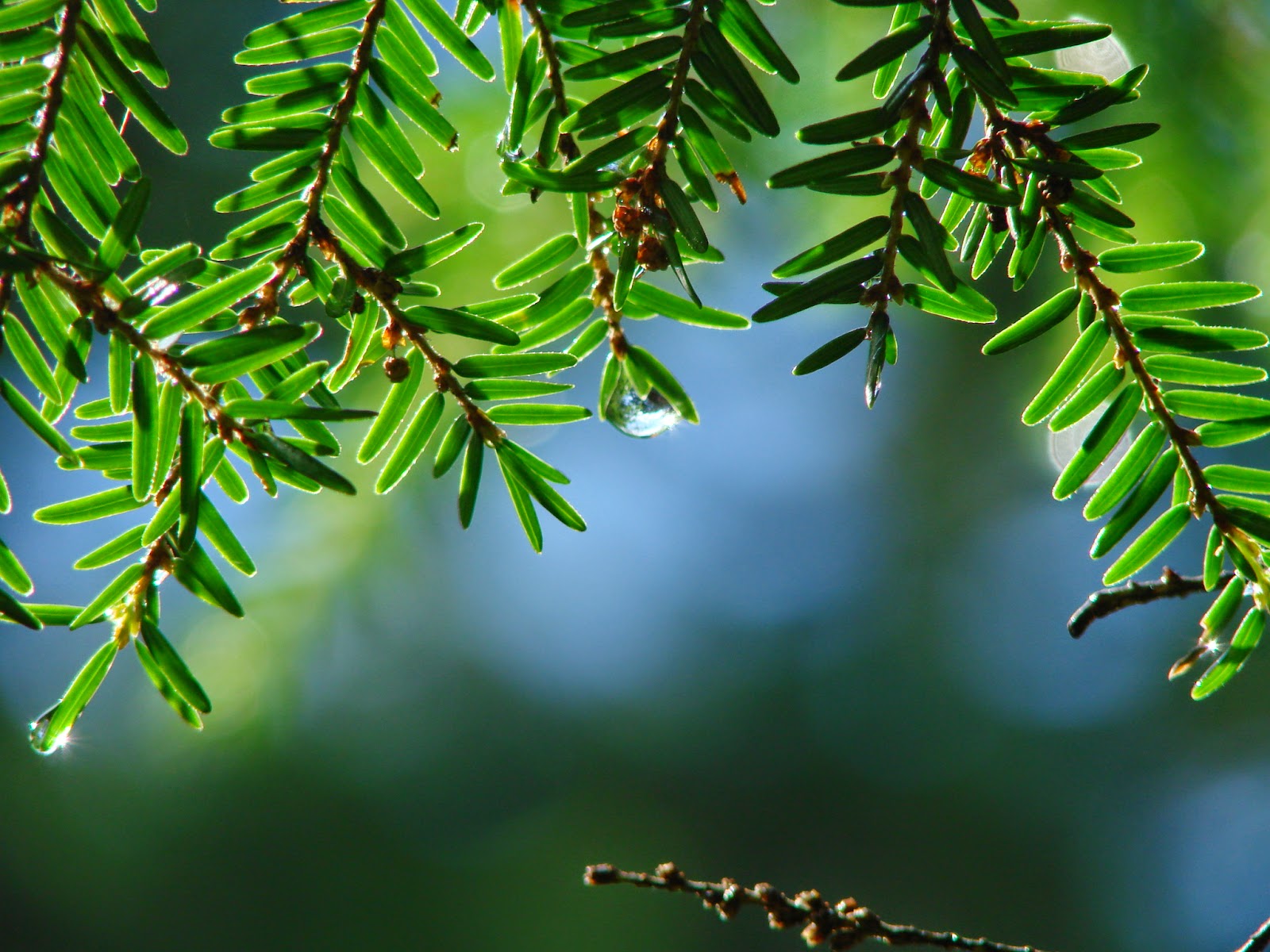 So that’s my tree, the tree God made me to be and the tree that I am. No mighty oak for me. I want to be known as a mighty evergreen, even if the Charlie Brown variety.

~~RGM, from an earlier nature journal entry,
revised December 5, 2014
Posted by Rick Mylander at 6:58 AM No comments: