From My Nature Journal: Spirit Wind 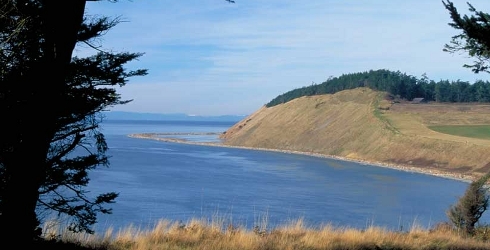 It was a blustery hike today, initially quite labored, up the Bluff Trail of Ebey’s Landing National Historic Reserve on Whidbey Island. Fifty mph gusts raised sand that stung the face and smarted the eyes. Steep grade and strong gale combined, and I strained to oppose them. At times my balance required catching as I leaned into the wind.

But, once on the bluff, I stopped, set the labor aside and let the wind sweep over me in a way as to nearly feel it softly piercing, blowing through my body as a sieve, an almost cleansing sensation. I seemed to swim, or was it flying? I thought of the old Keith Green song, Rushing Wind:

Rushing Wind, blow through this temple,
Blowing out the dust within.
Come and breathe Your breath upon me:
I’ve been born again.

God’s breath. Breath of heaven.
The Spirit of God has made me, and the breath of the Almighty gives me life. (Job 33:4)

The wind blows where it wishes and you hear the sound of it, but do not know where it comes from and where it is going; so is everyone who is born of the Spirit. (John 3:8) 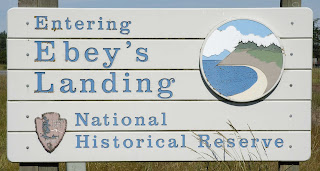 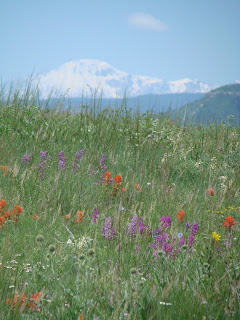 We never anticipated so many.

Gail and I hit the Ridgeline Trail today outfitted with gear we had not actively hiked with before, at least in this way: an open notepad and pen. In the days prior we had noticed an amazing profusion of wildflowers in bloom, observing newly-opened ones almost every day. Finally, yesterday, we mused that we should bring paper and pen sometime soon and record how many we see. “There must be twenty-five or thirty,” one of us said.

So today we gave ourselves extra time for our regular three-mile circuit, and started recording from the moment we left the trailhead. Astonishingly, we had not even gotten off the feeder path before we had already surpassed the imagined number.

It was quite stunning, a magnificent diversity. In that small distance, we counted eighty-four different blooming wildflowers! Eighty-four! And this was a conservative count, especially because we had not the patience this time around to differentiate the varieties of vetches (at least four) and the plethora of penstemons (at least six); no doubt there were more of these ubiquitous species. Additionally, this count included only those very near the trail, and did not include tiny groundcovers, or the flowers in bud but not bloom. All told, there may well have been far more than a hundred. 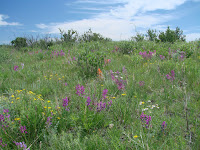 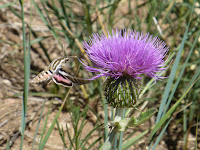 Most of the plant names escaped us (an effort for another day), so we recorded them by color, character, and leaf shape, so as not to duplicate. Thirty of the eighty-four were shades of yellow (36%), nineteen purple (23%) and eighteen white (21%). The remaining were pinks, oranges, blues and corals. Many species there were that have been cultivated -- roses, geraniums, orchids, yarrows, asters, alyssums, clovers, forget-me-nots, daisies, alfalfas, lupines, sunflowers, spiderwort, potentillas, mallows, yuccas, sweet peas, larkspurs, harebells, trumpets, wallflowers, dogbanes, paintbrushes, flaxes and phloxes. There were even onions and cherries. But the more undomesticated were well-represented also -- arnicas, holly, other worts, thistles, prairie smoke, knapweeds, prickly poppy, banner flower, cacti, and who-knows-what-else. 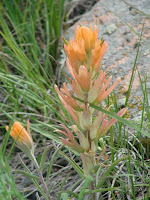 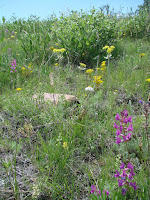 …There they were, every one of
them in all their created glory.

Some were so odd as to almost defy description – fern-like, butterfly-shaped, spidery, fringed-clusters, asparagus-leaved. And yet others were so common-looking or plain-seeming that we have very likely typically overlooked them – dandelion-like, dandelion-like #2, and dandelion-like #3. Yet there they were, every one of them in all their created glory. 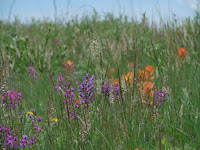 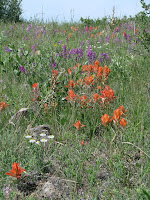 That’s what it was. Inestimable beauty, magnificent, even regal, exceeding the splendor of Solomon.

Consider the lilies of the field, how they grow; they neither toil nor spin, yet I tell you, even Solomon in all his glory was not clothed like one of these. If God so clothes the grass of the field, which is alive today and tomorrow is thrown into the oven, will he not much more clothe you? (Matthew 6:28-30)

~~ RGM, from an early June entry several
years ago while we lived in Colorado
Posted by Rick Mylander at 9:06 AM No comments: