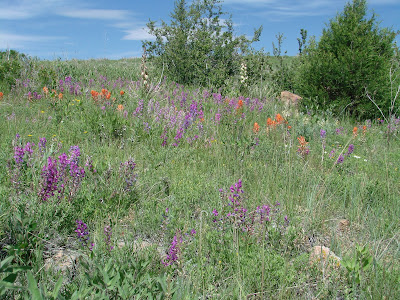 (This is a piece from my old nature journal. It goes nearly ten years back to a June afternoon when the Ridgeline Trail near our Castle Rock home was brand new, an area we had begun exploring well before the trails had been cut.)

~~~
We never anticipated so many.

Gail and I hit Ridgeline Trail today outfitted with gear we had not hiked with there before: a spiral notepad and pen. In the days prior we had noticed an incredible profusion of spring wildflowers in bloom, observing ones newly-opened almost daily. Finally, yesterday, we mused that we should bring paper and pen sometime soon and record how many we see. “There must be twenty-five or thirty,” one of us said. So today we gave ourselves extra time for our regular three-mile loop, and started recording from the moment we left the trailhead. Astonishingly, we had not even gotten off the feeder path before we had already surpassed our imagined number.
It was quite stunning, a magnificent diversity. In that small distance we counted eighty-four different blooming wildflowers! Eighty-four! And this was a conservative count, especially because we had not the patience this time around to differentiate all the varieties of vetches (at least four) and the plethora of penstemons (at least six); no doubt there were more of these ubiquitous species. Additionally, this count included only those plants near the trail, and only those in bloom – it omitted those more than several yards off the path, as well as tiny groundcovers we may not have seen and those in leaf or bud but not bloom. All told, there would have been far more.

Thirty of the eighty-four blooming species were
shades of yellow, with nineteen purple and
eighteen white; those remaining were various
hues of pink, orange, blue and coral…

Gail is the wildflower expert between us. (I’m more the tree, rock and sky guy.) She has an uncanny knack for name recall of plants she even rarely sees. “Don’t you remember when we saw this one once several years ago at blobbity-wherezit?” So she ends up having to school me each year even in some common ones I always seem to need to relearn. Even still, many of the names escaped us both (an effort for another day), so those we could not ID we recorded by color, character and leaf shape, so as not to duplicate. Some were so odd as to almost defy description – fern-like, butterfly-shaped, spidery, fringed-clusters, asparagus-leaved. And yet others were so common-looking or plain-seeming that we have very likely overlooked them typically – dandelion-like, dandelion-like B, and dandelion-like C. Thirty of the eighty-four blooming species were shades of yellow, interestingly, with nineteen purple and eighteen white; those remaining were various tints of pink, orange, blue and coral. Many species there were that have also been cultivated: wild roses, geraniums, orchids, yarrows, asters, alyssums, clovers, forget-me-nots, daisies, alfalfas, lupines, sunflowers, spiderwort, potentillas, yuccas, sweet peas, larkspurs, wallflowers, paintbrushes, flaxes and phloxes. There were even wild onions, plums, currants and cherries. But those undomesticated, at least to our knowledge, were also well-represented: arnicas, mallows, other worts, harebells, fairy trumpets, dogbanes, thistles, prairie smoke, holly, knapweeds, prickly poppy, banner flower, cacti, and who-knows-what-else. Yet there they all were, every one of them in their created glory.

Hmmm… Glory... That’s what it was, inestimable beauty, even regal, exceeding the splendor of a king.

Jesus said, “Consider the lilies of the field, how they grow; they neither toil nor spin, yet I tell you, even Solomon in all his glory was not clothed like one of these. If God so clothes the grass of the field, which is alive today and tomorrow is thrown into the oven, will he not much more clothe you, you of so little faith?” (Matthew 6:28-30)

The grass withers, the flower fades, but the word of our God stands forever. (Isaiah 40:7)

From My Nature Journal: Purity of Heart is to Will One Thing 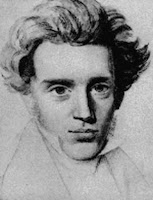 Purity of heart is to will one thing.

These were words of Danish philosopher and social critic Søren Kierkegaard (in fact, they were a book title of his), speaking of the singularity of purpose and will with which the mature follower of Christ pursued the life of faith. Off the top of one’s head it might be challenging to describe that ‘one thing’ in a single sentence, and would be interesting to raise that subject among a group of friends sometime soon. But it no doubt relates to the same ‘one thing’ about which Jesus exhorted Martha in Luke 10:41-42, “Martha, Martha, you are anxious and troubled about so many things. But only one thing is needed…”

Singularity of will… Sometimes, by contrast, my seeming multiplicity of wills is an annoyance, and that not only to me.

Singularity of will… Sometimes, by
contrast, my seeming multiplicity of wills
is an annoyance, and that not only to me.

Over the last several springs there has been a bass nest in a couple feet of water about twenty feet south of our dock. A fish nest? Yes, they’re different from most other animal nests – in the wide open with little cover, and in the case of bass and many other fish, are simply a roughly circular clearing where the male has driven away the sand and silt with his tail and left a slight, gravelly depression. Nose anchored in a fixed position, he pivots to create a bed approximately twice his length. (‘Our’ nest is twenty-four to thirty inches in diameter.) He’ll then coax a ready female over it and woo her; mama releases her eggs, papa gives them a spray of sperm (called ‘milt’), and the fertilized eggs settle into the sparse cover of cracks and crevices below. She swims away, often to spawn again elsewhere, and the male may entice another female to spawn with him, assuring good diversity of offspring. The male then guards the nest for several days, not exactly settling on but hovering over it or patrolling nearby; when the fry hatch (I always thought ‘fry’ was an ironic name for juvenile fish, given their potential future…), papa will guard it for another day or two and then be gone. Many of these nests are visible in shallow water, as the gravel tends to be lighter in color than the silt and sand that has been blown aside. And if the lake is calm, it is usually quite easy to spot a nice-sized fish perched over it.

During spawning season, fishermen work these beds with various techniques to catch them. (I won’t reveal here what I think is the most effective method, as that would be to disclose trade secrets.) Most fisherpeople I know have long since progressed to catch-and-release when it comes to bass, especially in pristine natural settings where better food fish like sunnies, walleye and trout are more available. It takes a pretty large bass to be a legal keeper in the northwoods anyway, in excess of fifteen inches here in Michigan. Up north, that’s a big fish; individuals that reach this size do not do so because they’re dumber than average.

But bass are just plain fun to catch. Even small ones give an amazing thrill, and they are just so beautiful to see up close. Only very rarely is one wounded in the catch-and-release process, if it is done right. A few seconds out of the water, liberation from the hook, maybe a photo, and finally a gentle release and they’re back in the water in a few flashes, more quickly gone in a flash of their own.

And this is if a spawning fish can even be caught. Getting back to the idea with which I started, they are pretty intent on their purpose. Typically a nesting fish will ignore the distraction of nearby food, including bait or lure; in fact, it is not unusual for a nested fish to pick up the edge of a lure ever so gently, too smoothly and lightly for the fisherman to even feel it, then move to the edge of the nest and just spit it out. I’ve seen them do this. Can’t you picture it? “Oh, there’s that annoying little thing again… (Lift.) Puhtooey!” In fact, if a fisherman has the ability to actually see his lure move slowly left or right, defying physics, a quick tug might capture him right then and there.

This past Memorial weekend my dear son-in-law could not resist seeing if he could raise the old boy in our swimming area and take a look. I watched for a short while from the three-season porch as he worked the bed, and, immediately after I looked away, he was clambering quickly up the steps with his catch held carefully in both hands. We hastily shared the joy of this little natural beauty, and Beej was off quickly for the release. 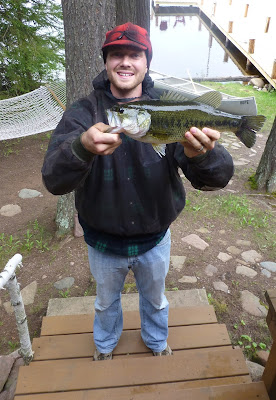 Here’s the thing, though… Later that morning, out of curiosity I asked him if he could tell if the fish had returned to its nest at all while he was down there continuing to fish. “Oh, within seconds it was back on it,” he replied. “Really? Within seconds?” “Yes, maybe ten.” We both shook our heads in amazed delight. It had just gone through what was likely a first-in-its-life experience, fought a fight that would mean life or death, was forcefully yanked from its familiar environment and was finally introduced to as foreign a setting as underwater would be to us. Once back in the water, wouldn’t you think it’d take off for the most distant cover it could find, in sheer fear? Nope, within a brief moment he was back at it as before.

That is singularity of purpose. That is willing one thing.

Forgive my anthropomorphism, but, as always, natural realities constantly remind me of spiritual realities. I wish I could possess that kind of singularity of will. My mind at times wanders, my commitment at times wavers. If purity of heart is to will one thing, my heart must be pretty adulterated. Will it be Jeremiah’s description that wins out, who said, The heart is deceitful above all things, and is exceedingly corrupt…? Or Paul’s description – This one thing I do. Forgetting what lies behind… I press on toward the goal for the prize of the high calling of God in Christ Jesus…? One clever commentator asked the question, “Do we say, with Paul, ‘This one thing I do,’ or do we rather say, ‘These twenty things I dabble in?’”

God knows me and knows my heart, and I draw great consolation from that. As Thomas Merton prayed, “…I believe that the desire to please You does, in fact, please You.” God knows your heart, too. In the midst of life’s distractions, however annoying, or its traumas, however shocking, there is a place of purpose to which we may return and find again the possibility of life renewed and hope restored.