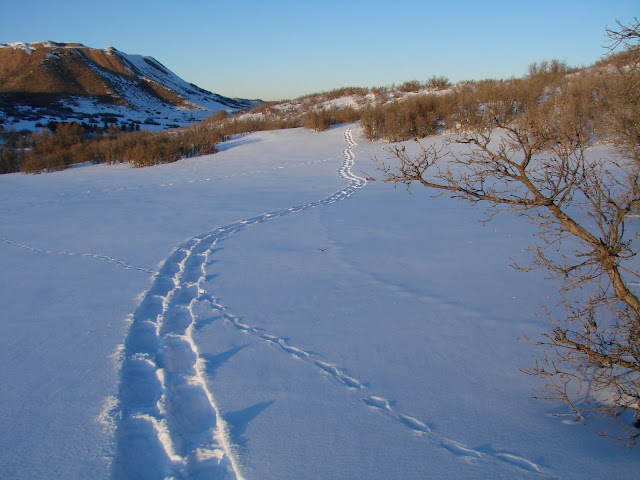 It is late in the month, and since I have been planning to highlight a photo each month, I had better get to it!

I wish I could say I took this photo this week. Alas, we have not had really good snowshoeing snow yet this season, at least not down low here and nearby.  This was taken a couple seasons back about two miles south of our home and a mile west of downtown Castle Rock, in an area that will soon be developed into a regional park. It will be a lovely place with miles of trails connecting the butte tops.

The area between Denver and Colorado Springs is peppered with buttes, as the foothills fall off and break up going east to the high plains. Most of these are flat but some are capped with a conglomerate stone, like the namesake of the town. Here around the city of Castle Rock itself, several of the flat tops had historic quarries up top where a building stone called rhyolite was quarried from the late 1800’s into the 1900’s. It is a fairly soft stone of pressed volcanic ash, spread eons ago from an enormous eruption over a hundred miles to the southwest. Local stone ranges from whites to grays to pinks and light purples, and even today graces many an old building in the greater Denver area. The butte in this photo had such a quarry at one point, attested by the scrap rock that can be seen pitched from the cliff edges.

Any guess as to what may have left the tracks that cross mine in two places? Look it over, and I’ll give the answer below. There is enough detail to make a determination.

About the only tree the photo shows is the ubiquitous Gambel (a.k.a. Scrub) Oak, though a few Ponderosa Pines show off to the left in the shadows. This is pretty typical of the foothills here at 6200 feet elevation. Though small in stature (only up to twenty feet in height, usually smaller) and thus very unlike the huge oaks in the rest of the continental U.S., Gambels still provide an unusually large crop of acorns for being so small, and so offer a much needed deer browse when the ground is clear of snow. And actually, contrary to popular opinion outside Colorado, snowcover in the Denver area is very much the exception than the rule. Though we average 57 inches of snow annually, what we get does not last long; moderate temps and intense high altitude sunshine see to a very quick melt. This would not be the case, of course, another three or four thousand feet higher where the snows can last the winter.

The openings you see are not clearings but natural high meadows. It is actually pretty amazing to come across openings even high in the mountains, called alpine meadows, interspersed among the pine and spruce forests. Found where they are due to moisture and drainage patterns, these gorgeous places are typically covered with all sorts of wildflowers the whole spring and summer long. I’ll post some of our alpine meadow photography some time.

To the attentive eye, each moment
has its own beauty, and in the same
field it beholds, every hour, a picture
which was never before seen and
shall never be seen again.

OK, the tracks? Those belong to cottontail rabbits. When the tracks begin to melt they can start to look like human footprints, but these remain on top of the snow and don’t ‘posthole’ like a typical footprint. A series of clumps about the size of a man’s shoe, going in a roughly straight path with about an eighteen-inch center, tell the cottontail’s sign. These rascals have proliferated around here like, errr… like rabbits, and also offer a tasty regular morsel for area coyotes, bobcats, black bear, mountain lions, weasels, hawks, owls and eagles.

Well, a naturalist can talk on and on about what might seem to some not much of anything! But there is a great deal to see in nature observation, wonders in fact. Consider Ralph Waldo Emerson: "To the attentive eye, each moment has its own beauty, and in the same field it beholds, every hour, a picture which was never before seen and shall never be seen again.” Or how about Emerson’s colleague Henry David Thoreau, who said, “That man is richest whose pleasures are simplest.”

Thanks for sharing in some of God’s riches I have known.

Blowin’ in the Wind: “All Creatures of Our God and King” 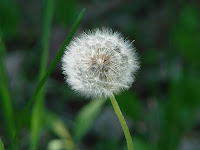 (Blowin’ in the Wind is a regular feature on my blog consisting of an assortment of nature writings – hymns, songs, prayers, scriptures, poems or other things – pieces I may not have written but that inspire me. I trust they will do the same for you!) 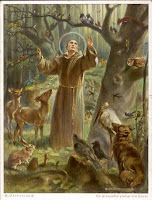 All Creatures of Our God and King is a classic and well-loved hymn, the lyrics of which are based on a canticle written in the year 1225 by St. Francis of Assisi, Italy. Francis is considered within Catholicism the patron saint of animals and the environment, and is also the founder of the Franciscan Order (the Order of Friars Minor). Included in the legends concerning the man is his ability to preach to animals, which might come in handy to me for getting rid of the ravenous rabbits in my back yard, or at least convert them from destroying our perennials. But I digress... back to All Creatures…

The original song is titled Canticle of the Sun, a lovely prayer of praise that celebrates God’s creation and that I will write on another time. Among the oldest hymns in many hymnals, if not the oldest, the original lyrics may also be the oldest-known work of literature written in the Italian language.

Not yoked with a hymn-tune until 1623, Peter von Brachel of Germany fitted it to a melody called Lasst Uns Erfreuen, or LET US BE GLAD. It was finally translated into English in the late 1800’s by British clergyman William H. Draper, and then harmonized by none other than composer Ralph Vaughan Williams for The English Hymnal, Oxford University Press, in 1906.

David Crowder has popularized St. Francis' song in recent years, adjusting its tune and timing slightly and limiting the number of verses. Hit the following link to listen: David Crowder Band's "All Creatures of our God and King."

Here is the hymn in its entirety. May it be a prayer for you as it is for me:

All Creatures of Our God and King

Thou rushing wind that art so strong,
Ye clouds that sail in Heaven along, O praise Him! Alleluia!
Thou rising moon, in praise rejoice,
Ye lights of evening, find a voice!

Thou flowing water, pure and clear,
Make music for thy Lord to hear, O praise Him! Alleluia!
Thou fire so masterful and bright,
That givest man both warmth and light.

Dear mother earth, who day by day
Unfoldest blessings on our way, O praise Him! Alleluia!
The flowers and fruits that in thee grow,
Let them His glory also show.

And all ye men of tender heart,
Forgiving others, take your part, O sing ye! Alleluia!
Ye who long pain and sorrow bear,
Praise God and on Him cast your care!

And thou most kind and gentle Death,
Waiting to hush our latest breath, O praise Him! Alleluia!
Thou leadest home the child of God,
And Christ our Lord your way hath trod. 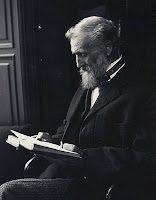 "Look at that now… And to think that God should plan to bring us feckless creatures here at just the right moment, and then flash such glories at us! Man, we are not worthy of such honor! Praise God from Whom all blessings flow!"

A bit about John Muir –

I love this quote. Maybe it is just because I have never, as a wordsmith, had occasion to use the word feckless in a sentence before! No, not really, I love the quote because I love John Muir. He is one of the very few well-known naturalists who was unabashed in his willingness to attribute nature’s beauty to a creative Creator, and to advocate for our role, as God’s people, to be responsible stewards of the earth.

Often referred to as ‘the father of national parks,’ Muir (1838-1914) was an eccentric and impassioned American naturalist of the late 19th and early 20th Century. Born in Scotland and raised in rural Wisconsin in perhaps an overly strict Christian home, he nonetheless practiced a lifelong faith, something reflected often in his writings and dealings. He believed that the primary source for understanding God best was ‘the book of nature’ that God had provided us.

As a young man working in an Indiana wagon-wheel factory, he suffered an eye injury that nearly blinded him; by the time he recovered, he had made a personal vow should his eyesight be restored to pursue with all his heart his passion for the study of nature. And so he did. In the process he was instrumental in the founding of the Sierra Club, and helped establish Yosemite and Sequoia National Parks, recognizing the enormous value of preserving the incredible beauty of these areas. He was friend to Ralph Waldo Emerson and Teddy Roosevelt, utilizing whatever bully pulpit he could find to advocate respect for creation. Muir Woods National Monument, a National Park unit just north of San Francisco, is named after him.

One of my favorite ‘wish I’d thought of that’ anecdotes about Muir comes from his early years in the Yosemite Valley of California: his first two years there he lived in a small cabin that he built right on Yosemite Creek, constructed in such a way that the stream ran openly through a corner of the room so he could hear it all the day long. How’s THAT for a white noise machine!


My two favorite books of his are My First Summer in the Sierra and Travels in Alaska. There is also a beautifully illustrated little boardbook for children that tells his story, John Muir: America’s Naturalist.

P.S. The General Sherman Sequoia is 37 feet in diameter at the base, wider than a three-car garage, and is the world's largest tree by mass. See the December 2012 National Geographic for photos and cover story of the world's second largest, The President, also in Sequoia NP. Included is an amazing fold-out composite pic of the entire tree, top to bottom.
Posted by Rick Mylander at 8:26 AM 4 comments: