From My Nature Journal: Trees of Life

One would have had to be living in a cave for the last several years to not have heard of the dangers being posed by the clearing and destruction of Amazonian rainforests. Of course, no one is currently decrying the former destruction of forests around the globe – boreal, temperate or tropical -- including most native forests in North America. It’s just that everyone on earth needs those Brazilian rainforests like never before in order to help sequester the superabundance of carbon being produced worldwide by the burning of fossil fuels. It seems those forests have become something of a poster-child, representing one of our best defenses against unrestrained climate change. Turns out they are trees of life.

I’ve been thinking a lot lately about those trees, and for one simple reason: I realize that Gail’s and my carbon footprint is larger than we’d like it to be, contributing to the growing problem in the first place. All of us should be concerned about our carbon footprints, you know. (Need some help? Check out carbonfootprint.com.) Oh, Gail and I practice a lot of the simpler creation care efforts like serious recycling, volunteering for environment care efforts, bunching our trips, shutting off lights and unnecessary appliances, limiting herbicides and pesticides, conserving water, converting to LED’s, and minimizing waste, especially plastics. (See zerowastehome.com.) But there are two major issues within our lifestyle that probably contribute more carbon harm than all our mitigation efforts combined. First, our home has an electric furnace. Before moving to Washington recently, I 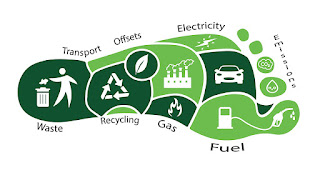 did not even know that there were such things. It is a beast of an electricity user. We’re making plans to redo our home’s insulation and install both a heat pump and woodburning stove, but even still, our small home’s heating needs require a surprising amount of energy. Secondly, with three of our four children and our parental families half a continent or more away, we do a lot of traveling, and can really rack up the highway miles, our preferred method of travel.

Which brings me back to those trees. All of this has gotten us thinking a good deal about carbon offsetting as another possible mitigation. (See nativeenergy.com or terrapass.com.) Yes, it seems the ‘affluent western approach’ to the problem, but at least it is something that can be done. It’s literally, pardon the metaphor, fighting fire with fire: the best way to counter the destruction of a forest is to plant another. It won’t assuage my guilt, but I cannot live in a cold cave without a car at this season of my life, and at least it’s a start. I applaud those who can do more, but I appeal to them to let me do what I can without judging me too severely.

Trees of life. Trees impact life positively, no doubt about it, and that’s an understatement. It should surprise no one that trees play an important part in the well-being of Earth; indeed, a greater attention to creation, I believe, will produce a greater physical and spiritual well-being in the lives of individuals as well. And as for trees, nature has such a positive impact, for example, that children would simply do well to get outside and climb a few trees more often! 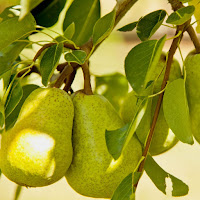 But as usual I’ve got something else on my mind as I continue, at least with this particular blogpost. The Bible also speaks of a Tree of Life, and that in several places. It first appears in the opening story of creation. God placed such a tree in the Garden of Eden alongside the Tree of the Knowledge of Good and Evil, and bade the man and woman leave the latter alone. Well, they didn’t, and we all know the outcome of that, an outcome that includes the abuse of creation. (My nephew by marriage posted on Facebook today that his three-year-old daughter, when reading in their children’s picture Bible, saw the apple tree and said, “Oh, yummy, apples! Yum! Apples!” And then he asked, “Should I be concerned?” Thank you, Anthony. Yes, be concerned. Be very concerned.) And whether Eden is history or allegory is not the point; the issues it addresses are still true truths. In fact, it was the very presence of the Tree of Life that caused God to banish Adam and Eve from the garden, simply to prohibit their access to it (Genesis 3:22-24). God even goes so far as to set angels with flaming swords at the ‘east entrance of the garden’ to bar the gate and keep men and women away. Say what? Apparently there was something about that Tree that God did not yet want people to know, or, more likely, that God knew people were not yet ready for. And did you notice? Curiously, God did not prohibit them eating of the Tree of Life until after they had sinned. Fascinating. It seems it was available to them beforehand, though they did not appreciate the fact.

And then, just like that, the Tree of Life seems to disappear from the Biblical narrative for a long while. What ever happened to it? One might even ask today if it’s still out there somewhere.

It is spoken of somewhat casually in the book of Proverbs, but poetically. That wily old Solomon was quite an eclectic character and used all kinds of images in putting his truisms to the pen. Four things there are likened to a ‘tree of life:’ wisdom, righteousness, fulfilled yearning, and gentleness of tongue, all good. But I don’t think Solomon is referring to the Tree of Life here at all, he’s just making poetry out of some pretty good maxims for life. 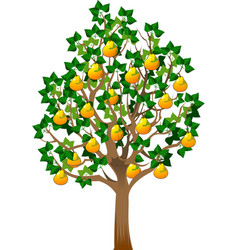 So where next? The Tree of Life doesn’t show up again literally until the very last book of the Bible. Yep, it jumps from the first book of the Christian Bible to the last, the apocalyptic literature of The Revelation of St. John the Apostle. Some kind of consummation is afoot here that involves this special Tree. Almost immediately, in 2:7, we are told that the privilege of eating of the Tree of Life will at last be given the one who stands firm for God. As John’s heavenly vision continues, he speaks of the healing properties of the very leaves of that Tree (22:2), and this not simply for individual healing, but for the ‘healing of the nations.’ Whew, how we need that healing. Again, in 22:14, John speaks of access to the Tree given only those who keep God’s commands, and lastly, a final warning is given that will again bar access to this Tree from those who alter God’s plan (22:19). It looks like some pretty heavy stuff here.

With only a brief poetic reference in between, it seems that the Bible moves from referencing this hugely significant mystery Tree in the creation narrative to stating its important place in the consummation of time. How can this be? There must be something more, and there is. There’s one more tree of life we cannot omit, one that ties creation and consummation together; in fact, it’s where I want to end my thoughts today.

Jesus’ cross is called a tree several times in the Bible, the apostles speaking of it in their preaching in the book of Acts. For example, in the midst of a sermon about the death and resurrection of Jesus that Paul preaches in a synagogue in Antioch, he says at one point, “When all things were fulfilled that were written about him, they took him down from the tree and laid him in a tomb. (13:29)” Peter speaks similarly a couple other times in Acts. But I love what Peter says in a letter he wrote that we have in our Bible as 1st Peter. He’s also speaking of Jesus there and says of him, “…who his own self bore our sins in his body on the tree, that we, having died to sin, might live to righteousness. By his stripes you were healed. (2:24)”

Jesus’ cross is the Tree of Life. It is there both for our healing and that of the world. Through Jesus, God has finally dismissed those crack guards with the light sabers and made the Tree of Life available to eat from yet again.

From My Nature Journal: Welcome to the ‘Season of Creation’

Before too much more of the month of September gets past me, I wanted to get something on my blog regarding what is known in some Christian circles as the Season of Creation. To my neglect, I was not at all familiar with it as such before my recent connection this past year with the Greening Congregations Collaborative, a local ad hoc association of churches here in our new Washington digs committed to creation care, about whom I have written before. And once again, it seems it is our Catholic friends whom we have to thank for the original effort. 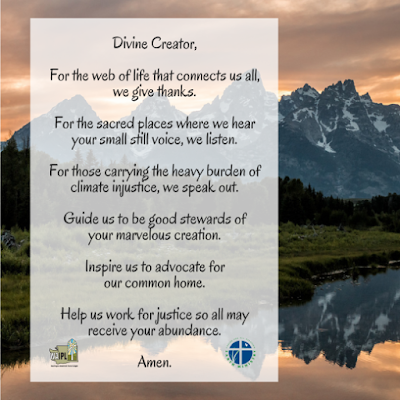 The Season of Creation is a special time when people of Christian faith are urged to pray and work toward greater stewardship of God’s good Earth. It actually is celebrated annually from September 1st through, appropriately, the Feast of St. Francis of Assisi on October 4th (or St. Francis’ birthday, if you prefer). Even if you are not Catholic, it will be well for you to know that he IS, after all, the Patron Saint of Ecology. Of course, it’s not as though one should ever really celebrate Earth stewardship for one month and neglect the issue the remainder of the year. Good stewardship is good stewardship, and one month of it is not intended to be a bad stewardship ‘offset.’ Creation care is a critical dimension of Christian discipleship – always has been, always will be – and it is becoming increasingly important as Earth’s degradation dangerously proceeds.

Anyway, I’ll quit preaching. Here is a prayer that Christ-followers are urged to pray and work toward :

Divine Creator,
For the web of life that connects us all, we give thanks.
For the sacred places where we hear Your still small voice, we listen.
For those carrying the heavy burden of climate injustice, we speak out.
Guide us to be good stewards of Your marvelous creation.
Inspire us to advocate for our common home.
Help us work for justice so all may receive Your abundance.
Amen.

Find out more on the Season of Creation website, https://seasonofcreation.org/about/. You could also check out one of my favorite Christian faith-based creation care organizations, Earth Ministry. Find them at https://earthministry.org.

Posted by Rick Mylander at 9:52 PM No comments: