From My Nature Journal: It Had Been a Good Day for a Naturalist…

Up until the late evening, Monday had been a very good day for an amateur naturalist on vacation. 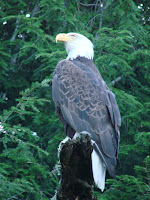 That morning while sitting at the end of the dock I watched an eagle take a fish from the channel. This natural drama is always exciting to witness, with the eagle coming up empty more often than not. But when it is successful, it is an absolutely remarkable feat of body control, aeronautic timing, beauty, and, if I may wax anthropomorphic, grace. 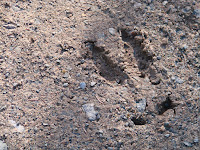 Later that afternoon on my daily walk, I ran across a beautiful set of fresh moose tracks. A solitary animal had entered County Road 206 from the thick Ottawa National Forest woods to the north, walked west about 75 yards on the rain-softened gravel, then cut abruptly into the woods to the south. I had not seen the tracks the day before, so they were put down sometime the previous evening or early that morning, the times of day these enormous and ungainly animals are most active. And since it had been a long while since I’d seen fresh moose sign around here, I was just very pleased to know they are still around. Some day I may be blessed enough to see one, as have some of our neighbors. 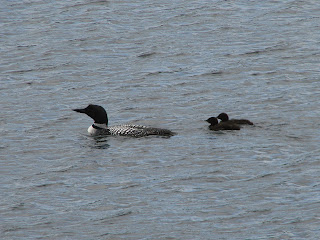 Then that evening after supper, Gail and I took to the water to go scouting the status of the lake’s new loons. We knew the floating platform here in our bay had been successful, with two chicks coming off it on Independence Day, thus receiving the nicknames George and Tom. And though we had heard that the other platform on the lake had not had a successful hatching this year, our kids told us they had seen another adult pair feeding a lone chick further down the lake. Maybe another had come the natural way, from somewhere ashore, though the birds have vastly preferred the platforms in recent years. Sure enough, we spotted the family from our bay on the north end of the lake, where they tend to stay, and the family with the single chick on the south end. Score three chicks this year for Beatons Lake. 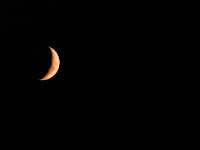 And to close out the outdoor portion of the day, the ‘seeing’ that night had been fantastic. Sky watching has always been a particular delight, and the Northwoods never disappoint on a clear night. The Milky Way was brilliant and the constellations and asterisms clear as a bell, with numerous shooting stars and satellites amplifying the sky’s three-dimensionality.

Yes, it had been a good day for an amateur naturalist. But then came my late evening reading, which made me feel like an absolute lightweight, just a naturalist ‘wannabee.’ I’m reading through a book by Jon Young called What the Robin Knows: How Birds Reveal the Secrets of the Natural World. It belongs to my sister, who often shares great nature reads with me; but once again, it’s one of those books that make me feel like a know-nothing. After observing and studying nature since childhood, I sometimes think I’m stuck in kindergarten in God’s nature school. The book is about deep observation, in this case, deep birding; it’s the kind of observation that not only allows one to know a lot of things about a species, but even know things about an individual bird, so one may be able to successfully read its cues and clues. Take this for example:

If one day I see a small bird and recognize it, a thin thread will form between me and that bird. If I just see it but don’t really recognize it, there is no thin thread. If I go out tomorrow and see and really recognize that same individual small bird again, the thread will thicken and strengthen just a little. Every time I see and recognize that bird, the thread strengthens. Eventually it will grow into a string, then a cord, and finally a rope. This is what it means to be [a naturalist]. We make ropes with all aspects of the creation this way.

I guess I may not be the naturalist I thought! Have I ever been able to tell one robin from another by the depth of my observation? No! This guy’s birding knowledge puts me to shame. And though I know it’s my personal insecurities at play here, I read this genre to be inspired to go deeper, not to be shamed!!! Still, I’ll persevere. After all, I’m only a quarter of the way through the book. Perhaps there will still be some ‘baby steps’ he’ll share that will be more suitable for a lightweight like me.

For now, I’ll have to be content… that the
first step to being a naturalist is to love…

For now, I’ll have to continue to be content with something I’ve long believed, that the first step to being a naturalist is to love, to love God’s creation. There’s so much to see, so much to know, so much beauty to observe, so much that nature can teach (not the least of which is humility!), all of which leads me to the Creator and to the truth of the Bible:

Ask the animals and they will teach you,
The birds of the heavens and they will tell you.
Speak to the plants of the earth and they will inform you,
Even the fish of the sea will declare to you:
Who among all these does not know that
The hand of the Lord has done this?
In His hand is the life of every living thing,
Even the breath of all humankind.
(Job 12:7-10)
~~ RGM, August 24 2020

P.S. I just shared that Bible passage last week at the memorial service of a dear naturalist friend who recently died. Peace to the memory of my friend Bob, who also knew countless good days enjoying God’s creation.
Posted by Rick Mylander at 9:31 AM 1 comment: