Blowin’ in the Wind: Roaming the Milky Way with John Adams 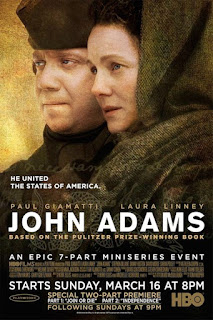 I’ve not referenced a movie before among my “Blowin’ in the Wind” essays, but I recently watched with Gail the highly acclaimed HBO miniseries, John Adams, featuring Paul Giamatti doing a nice job in the lead and Laura Linney a compellingly acted Abigail. It chronicles some of the interesting history of post-revolutionary War America, especially, what it took to complete the grand experiment of the first presidential succession. The series is quite long, so don’t expect to bag it in a single evening; but pick it up at your local library and spend several nights with some popcorn in front of the TV before warm spring evenings entice you outdoors.

Even though it’s probably fictional, there’s a lovely scene near the end of the series that grabbed my attention, and that I thought I’d enjoy sharing with you. Adams, late in life, long after his presidency and long back on his Massachusetts farm, walks slowly down a lane among his fields talking with his son Thomas. He is about 90 years of age by this time, his wife and two of his children have preceded him in death, and their conversation turns reflective. Sunset is past, dusk is deepening, and Thomas bids him turn and begin the walk home, as it is getting late.

Adams stops abruptly, thinks, and says to Thomas, “Come here…” His son stops and turns, and Adams says to him quietly, “I have seen a queen of France with eighteen million livres of diamonds on her person. But I declare that all the charms of her face and figure, added to all the glitter of her jewels, did not impress me as much… as that little shrub,” and he points to a small wildflower. (If my memory serves, it was a nondescript white yarrow.) “Now, your mother always said that I never delighted enough in the mundane, but now I find if I look
at even the smallest things, my imagination begins to
roam the Milky Way.”

…Your mother always said I never delighted
enough in the mundane, but now I find if I
look at even the smallest things, my imagination
begins to roam the Milky Way…

He pauses, then says very softly, “Rejoice evermore! Rejoice evermore!” His son looks at him like he’s losing touch, and Adams says with a smile, “Well, it’s a phrase from St. Paul, you fool! Rejoice evermore!” And then he shouts loudly with a jump in his step, “Rejoice evermore!” Laughing, he continues, “Oh, I wish that had always been in my heart and on my tongue. You know, I am filled almost with an irresistible impulse to fall on my knees in adoration right here,” and he gets weak-kneed and falls into his son’s arms chuckling.

As Thomas holds him up, Adams finally says, “If only my knees would bend like they used to!” He kisses his son on the cheek, and they continue.

That simple scene affected me strongly, a good example of what often happens to the Christian naturalist caught up to spontaneous praise by the most unpretentious of things. The beauty, mystery and singularity of creation is astounding. 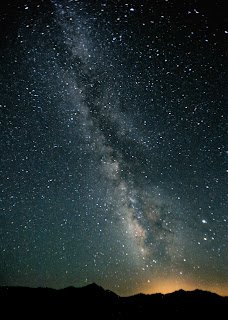 So pay attention. Look for beauty everywhere. You might just also find yourself when you least expect it to be roaming the Milky Way.

From My Nature Journal: Where Waters Meet, They Always Flow to the Low Spots

Our little cabin in the big woods of Michigan’s Upper Peninsula has as its mailing address the small town of Watersmeet. Thirteen miles away, Watersmeet is the nearest town and the place where we pick up our General Delivery mail. Never mind that our place is in a completely different township and county (crazily, even a different time zone!), our mailing address is still Watersmeet, for which we’re grateful. Otherwise we’d probably have to travel at least twice as far to get our mail.

What’s in a name? Well, what might you imagine from a town named Watersmeet? The town sits within the south central Ottawa National Forest, a million vast acres of semi-boreal northern forest; its predominant woodland type is one called Hemlock Hardwood, as the forest is around us, speckled with diverse broadleaf trees (mostly maples, birch and aspens) and conifers (hemlocks, pines, spruces and firs). But I venture to say that this area is also one of the wettest spots in the ol’ USA. Michigan itself is enveloped of course by the Great Lakes, but beyond that, not an insignificant portion of the Ottawa is wetland – lakes, ponds, rivers, streams, marshes and bogs. Some might even disparagingly call part of our area swamps. Frankly, as I tip my hand above, I prefer the term wetlands, or even the more exotic-sounding words -- muskeg, as they say north of the border, or fenland, as they call it across the pond. 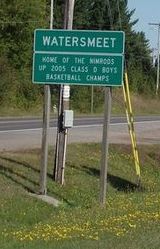 Thus, nearly needless to say, it’s fairly wet around there, and that brings us back to Watersmeet and its name. Curiously, somewhere nearby is the confluence of what is called a triple watershed. In that general area, waters will divide and flow three different directions. They’ll flow north to Lake Superior, the largest and most voluminous freshwater lake in the world, and thereby through the Sault and into the rest of the Great Lakes system. Or they will flow south and east to Lake Michigan via the Menominee, and from there, together with water from Lake Superior and all the Great Lakes, will go over Niagara Falls and out the vast St. Lawrence to the prodigious north Atlantic. Finally, other streams will take it south and west to the Wisconsin River, into the mighty Mississippi, and out to the sea via the warm Gulf of Mexico. A triple watershed… Natives and early travelers knew this reality very well, the place where the waters meet, and it dictated their portage routes. If I could find that general area, perhaps I could poke around a bit, spit in three different places, and have it flow with the rest via three vastly different, grand courses to the ocean deeps.

Parenthetically, do you know why it is that water flows at all, unlike most other compounds or elements? Interestingly, it’s because a number of the electrons of a molecule of water, the good old compound H2O, are in a constant state of paying friendly visits to the molecules next door, 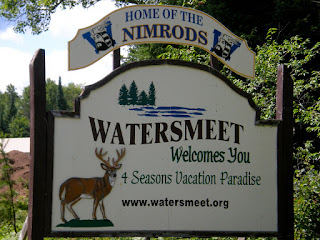 just as those molecules in turn are sharing their electrons with the various molecules of water next to them, and so on. I don’t understand quite how it does that, but it makes the whole thing, as they say, fluid. Amazingly, even some seemingly solid elements can flow, over time, due to gravity or other forces, just nothing as fast as water.

Here’s a no brainer as I get to my point, though: it doesn’t matter where waters meet, as long as there’s somewhere further to flow; water always flows to the low spots. No surprise here, the nature of water is to flow to the next lowest nearby point, if it can, always to somewhere else. That area of Michigan is only one kind of low spot, which is what makes it so wet. But there we are in turn over eight hundred feet above sea level, and the water that doesn’t evaporate must eventually move along to sea level.

Allow me to reiterate. Water flows to the lowest spot. The town of Watersmeet is only that point in a local sense; it must flow elsewhere from there, given the chance.

...It will not flow uphill to the
haughty spirit, but only downward
to the contrite in spirit...

Did you know God’s Word is also like that, like water? That’s not my idea but God’s. And it also flows only, and thankfully, to our lowest points. It will not flow uphill to the haughty spirit, but only downward to the contrite in spirit, only to the one who is ready and open to receive it from somewhere higher up. Unlike the water near Watersmeet, however, God’s water never evaporates, but remains in constant flowage to where it is allowed. That’s God’s idea, too.

“For as the rain and the snow come down from heaven, and return not thither but water the earth, making it bring forth and sprout, giving seed to the sower and bread to the eater, so shall my word be that goes forth from my mouth; it shall not return to me empty, but it shall accomplish that which I purpose, and prosper in the thing for which I sent it.” (Isaiah 55:10-11)

~~ RGM, from an earlier entry in my nature journal,
Adapted for use here February 11, 2016


P. S. And yes, as the signs say, Watersmeet is also the home of the Nimrods; far from its common parlance, the Bible says Nimrod was a mighty hunter warrior...

Posted by Rick Mylander at 9:24 AM No comments: