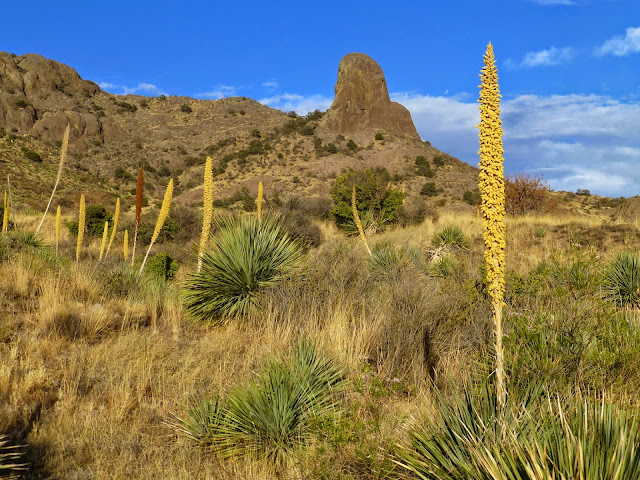 The earth is so full of the glories of God’s creation… Oh, I had been in the desert often and seen its flowering cactus -- the soft pinks and yellows of prickly pear, the even quieter yellows of chollas, the blinding red-oranges of hedgehog claret cups and reds of barrel cactus. What I was not prepared for was my first view last spring of the strange and marvelous sotol.

Gail and I were still new to New Mexico at the time, and we’d gone out on Mothers Day afternoon to hike an area called Aguirre Springs on the eastern slope of the Organ Mountains, We rounded a bend in the access road and came upon an enormous, ten-foot-tall flower just off the roadside, shooting out of what we thought was a yucca. As usual when we don’t know what something is, we snapped a photo to check later and went on. Having showed it around to several people, we even took the photo to a nursery to seek the name, but all we were ever told was, “It’s some kind of yucca.” Some even said the Soap Tree Yucca, which happens to be the state flower. But looking up the various photos online yielded nothing that came close to matching what we saw.

Now, yucca blooms are actually quite stunning in their own right, the New Mexico plants huge compared to those of the knee-high variety that poke us in the knees along Colorado trails. Flower stalks can also be ten to twenty feet tall, especially when the plants start to grow into trees as the photo to the right. The two New Mexico varieties are the Banana Yucca, named for the green banana-looking seedpods that develop when the plant matures; and the Soap Tree, the roots of which were used by ancient peoples to make a kind of frothy soap. Both plants were also extensively utilized as food sources and to make a rough twine that could be formed into all sorts of things – rope, sandals, baskets, mats, etc. California’s Joshua Tree is an additional yucca variety. Another plant with an enormous bloom native to the desert southwest is the agave, one variety of which, the blue, is exclusively patented by Mexico for the distillation of tequila. 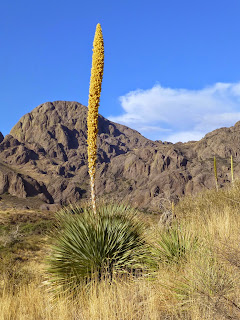 But back to sotols. We finally found a friend who could set us straight, the same friend who along with her husband later took us on that wildflower hike I wrote of on Mexican poppies in March. Melanie said, “No, that’s not a yucca, it’s a Desert Spoon Sotol, desylarion wheeleri, not even the same family.” Mystery solved. She also said that last year seemed a banner year for sotol blooms, but we are seeing near as many this year as last.

Unlike the yucca, and besides its very different flower, the sotol has tiny barbed hooks on the edges of its half- to three-quarter-inch wide frond stems, more slender than yucca fronds. The sotol frond cluster can be three to four feet in diameter, and the base of a cooked stem may be eaten as one eats an artichoke leaf. There at the base the stem broadens and cups; in prehistoric times, it was dried and used as a spoon, thus the name. As with yuccas, fibers were stripped from the sotol frond to make the same kind of twine products mentioned above. And the cool bloom? The plant takes up to fifteen years to mature and then can flower every several years. (The agave, on the other hand, matures for years, then blooms once and dies.) Flowers range in color from yellow to orange, rust and burgundy. The bloom stalk can be up to sixteen feet tall, measuring four inches in diameter at its base, and hardens into a tough pole that also had various uses for native people. (I myself have a dandy hiking pole made out of one.) Interestingly, the stalk was commonly used as a fireplow. The plant used to be harvested and made into a beer, but as with the agave, some Mexican companies are distilling it into a mescal spirit called, not too creatively, sotol!

The wilderness and the desert will be glad, and the Arabah will rejoice and blossom; like the crocus It will blossom profusely and rejoice with rejoicing and shout of joy The glory of Lebanon will be given to it, the majesty of Carmel and Sharon. They will see the glory of the LORD, the majesty of our God. (Isaiah 35:1-2)

Let my teaching drop as the rain. My speech distil as the dew, as the droplets on the fresh grass and the showers on the herb. (Deuteronomy 32:2) 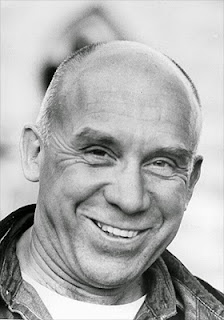 I am surrounded by a beauty that can never belong to me. But this generates within me an unspeakable reverence for the holiness of created things, for they are pure and perfect and belong to God and are mirrors of his beauty. He is mirrored in it all…

Years ago when I was music director at a Bible camp, we sang a folk song called “Have You Seen Jesus, My Lord?” Written by John Fischer around 1970, it was sung long into the 80’s in churches, too, was even a well-loved song used in many Christian renewal movements such as Cursillo and Lay Witness Mission. The song makes the point that we see the very face of Christ when we can finally learn to recognize him in another person. That is not dissimilar to concepts Jesus taught, after all. And in the very same way, we see the ‘face’ of God in what God has created, and the old song spoke of that as well.

Thomas Merton (1915-1968) was a Trappist monk. Trappists are known for their commitment to silence in daily practice, a habit difficult to understand in our wordy culture. (They're also known for their beer!) Yet Merton’s choice to speak through his writing was not a violation of his vows, but one encouraged by his superiors. An activist and prolific writer, he was also a thoughtful observer of nature, finding sustained solace in the forest environs of his home, the Abbey of our Lady of Gethsemani in Bardstown, Kentucky. As a result, he often wove contemplation on the natural world into his writing, speaking and teaching. If I recall correctly, I got this quote from a collection of his nature writings called When the Trees Say Nothing.

Indeed, God is mirrored in all God has made. Most profound of all, we are made in God’s very image – able also to love beauty, and be creative, loving, resourceful, powerful and wise.

In the Bible translation known as The Message, Romans 1:20 states it this way:
The basic reality of God is plain enough: open your eyes, and there it is! By taking a long and thoughtful look at what God has created, people have always been able to see what their eyes as such cannot see: eternal power, for instance, and the mystery of God’s divine being…

So whether it’s the songwriter, the Bible or Thomas Merton, there is no doubt in my mind: they all get it correctly.

From My Nature Journal: The Tarantula

I saw a tarantula in the wild today, a thrill even for an arachnophobe like me. It was not the first time I had seen one in nature, but it was the first time I had ‘discovered’ it myself. The only other time was while walking in a busy little tourist town in northern New Mexico, my attention having been drawn to it by a large group gathering around as it innocently crossed a path. Hardly an Animal Planet moment… 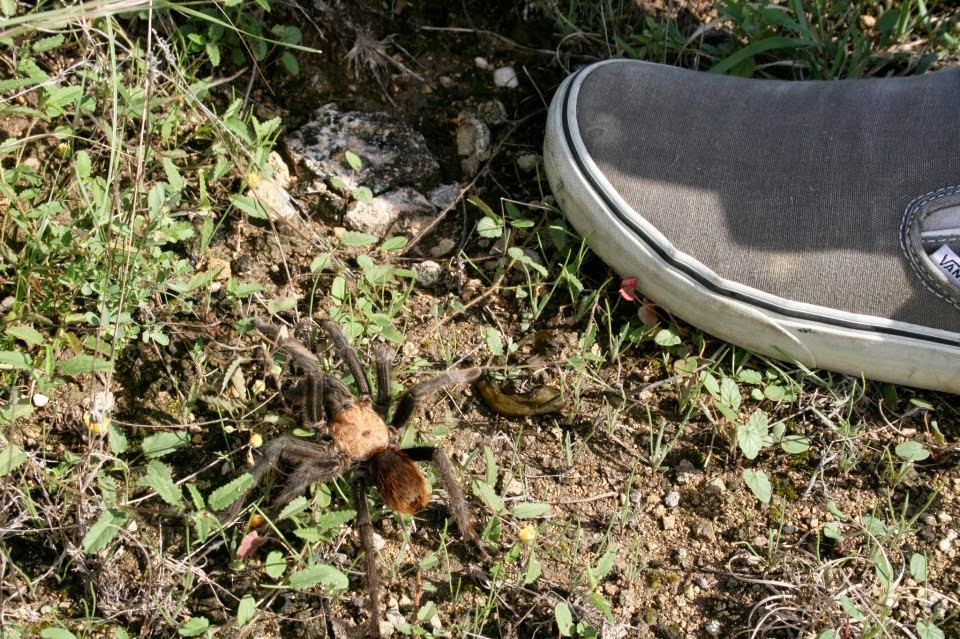 Today I was driving down to the Wet Valley with a friend, and was between Wetmore and Mackenzie Junction on Colorado 96. We rolled up over a hill and I saw it crossing the road and avoided it. I blurted out, “Oh… oh, wow… There was a… a… whatever you call it, we’ve gotta go back.” In my enthusiasm I initially couldn’t even come up with the creature’s name! Anyway, I pulled a quick U-turn (what my kids call a ‘Mylander Turnaround!’) and drove back to where I could open my car door in the middle of the highway (it was a fairly remote road!) and check it out close up, finally telling my friend what in the Sam Hill (his words) we were doing. After a few moments of examination, I asked him if he wanted me to back up and pull it alongside the passenger door so he could see it, but he replied, “No thanks, that’s already the closest I want to get.”

What a delight to see such a thing. And I have wondered as the day has progressed: why are such things exciting to me? People must think I’m some kind of a nutcase sometimes. I remember years ago a good friend in Minnesota asking me, after another now unremembered excitement over some natural occurrence, “What are you, some kind of an animist?” He was kidding, as he knew me well, but I have never forgotten his question.

We all have to find our
passions, given us as a gift…

Of course, animism is one of the oldest religions in the world, no doubt started by some of our ancestors simply developing or learning respect for nature’s powers and mysteries in all of their manifestations – fire, wind, lightning, powerful animals, seasons, food sources, celestial and terrestrial phenomena. I guess when it comes to religion, people could do far worse than that, and have. But me a nature worshiper? Sure, I admittedly get excited to see such things as a tarantula, which may be a bit nutty, and the other curiosities or beauties of the natural world. But we all have to find our passions, given us as a gift. No, I’m not an animist. I prefer worshiping the Giver of the gift, the Lord of all creation.

…Ask the animals -- they will teach you, the birds of the air -- they will tell you. Speak to the plants of the earth and they will inform you, even the fish of the sea will declare to you: Who among all these does not know that the hand of the Lord has done this? In His hand is the life of every living thing, even the breath of all humankind.
~~Job 12:7-11