From My Nature Journal: “You’ll Put your Eye Out with that Thing”

Isn’t that the father’s warning about the BB gun his son so coveted in the classic Christmas movie? Sometimes I wonder the same about the population of hummingbirds that encircle our little cabin: an exceptionally combative bunch surrounds us and we at times imagine ourselves becoming collateral damage in their battles. 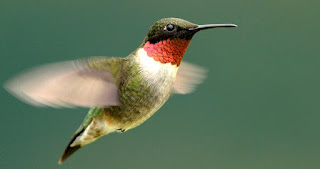 Now don’t get me wrong. We love hummers and we’ve long enjoyed setting out nectar. At our neighbors’ places the various family groups seem to get along just fine, with a dozen or more pleasantly and peacefully circling or settling to their feeders. The constant motion is enjoyable to watch, sometimes even giving the impression of a gentle lava lamp!

Not so here. Far from it! There’s constant bickering, male and female alike, the tiny aeronauts plunging off their spying perches on nearby hemlock branches to attack another daring to encroach upon ‘their’ feeder. Sometimes they’ll even t-bone the intruder broadside with such force they’ll knock them into the windowpane behind which the feeder hangs, like little hockey players over-aggressively checking an opponent into the glass. Occasionally one checked thusly falls stunned to the porch before gathering its wits about itself and reentering the fray. Most entertaining (if fights can be entertaining) is when they go after each other in the air like WWI biplane pilots, circling and diving and juking and jiving forward and backward up and down such that their nearly inconceivable flying skills are on full display, sounding like Star Wars lightsabers in action. Males will flex and flash their red-orange throat patches (called gorgets), with females splaying their striped tails as widely as they can so the tiny critters can present themselves as large as possible. It is truly a sight. They can fight for minutes at a time, with one chasing another off into the woods before a third sneaks back to feed, constantly raising its head to look back over its shoulders to be sure it’s not about to get hammered silly. 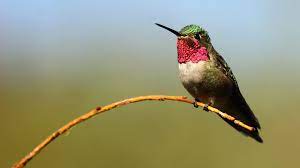 But since the feeder sits about eight feet from the nearest porch chair, we do sometimes get in
the way and might even duck for cover if it didn’t happen so fast. At any moment two loud hums can come whizzing by within a foot of our heads, sounding like they’re flying in one ear and out the other. Earlier this week one came back after chasing another into the woods and stopped in between my face and the book I was reading. It wasn’t but ten inches in front of my naked (and very vulnerable) eyes, looking me over back and forth as if to say, “You ninny, would you please get out of my way?” Back to the Christmas classic, I had to refrain from instinctively covering my eyes! And I was glad I refrained, mesmerized as I was the five to ten seconds or so it hovered there. Amazing little creature.

These hummers are the Ruby Throated species, common in their summer breeding range in every state north to south from the Dakotas, Great Plains and Texas east to the Atlantic. Migratory, they will winter in south Florida, Mexico and Central America, with some flying the 900-mile span of the Gulf of Mexico nonstop. Not sure how the little things have enough fat reserves to accomplish that exertion, but it is one of the many, many wonders of bird migration. They have one of the highest metabolic rates of any animal, with a heartbeat of over 1,200 beats per minute (20 a second!) and a breathing rate of 250 per minute, even at rest! The only bird that can fly backwards, wingbeat in hover flight is up to 80 per second. Incredible. And all this from the smallest birds in the world: some species can weigh less than a dime, if you can even imagine this feisty little flying machine that slight of weight. (Over the years I have held one on two rescue occasions; if I had closed my eyes, they would not have even seemed there.) Nectar is not its only food, lacking protein as it does; they are also insectivores, catching them both on the wing and plucking them from plants. Their beautiful nests (only two of which we have ever found) are the size of a golf ball, secreted on the exterior by lichen, lined with thistledown, and bound with spider webs. (In fact, one of my rescue efforts was to free a bird wrapped up in too much web in the garage window.) Finally, in nesting, two eggs are typically laid, one or two broods per year, and the young leave the nest in eighteen to twenty-two days.

But back to our diminutive local avian friends, I wonder why they fight so. It is long past nesting and fledging time, so there’s no longer any need to be territorial. There’s always plenty of food in the feeder. Is the fighting worth it? Doesn’t the constant chasing and fleeing and battling expend exponentially more energy than it would to simply share the feeder patiently, even collaboratively, like those at our neighbors’? I don’t get it. Maybe these hummers nearby are further back in evolutionary time, regressed like some humans these days. Our regional and national politics and silly culture wars are no better. Pugnacious. But worse.

Still, it is perplexing, especially when there is plenty to go around for all. The scarcity mentality does goofy things to animals. And people.

Surely my God will supply every need of yours according to his riches in glory in Christ Jesus (Philippians 4:19).