From My Nature Journal: When the Curtain Draws Back

There is so much going on around us in the natural world of which we are unaware.  I have often advised budding naturalists, especially children, how important it is simply to pay closer attention to one’s environment in order to see God’s creation reveal its rarities, secrets and mysteries, but a couple experiences these past two weeks brought this home to me yet again. 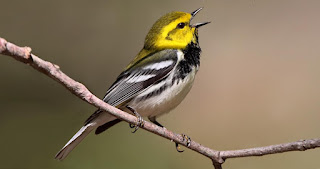 Several months ago I finally got around to downloading a newer feature of the Cornell Laboratory of Ornithology’s “Merlin” app to my phone, its bird identification by sound tool. I have always wanted to learn to better identify birds by their songs or calls and have watched for an app such as this for a long time. (Get it! It’s amazing!) But there it sat on my phone these many weeks without getting to it. Finally, on a quirk while I was doing something else a couple weeks ago, I heard a call that I had always wondered about: dzee-zee-zee-zoo-zee. I impulsively turned on the tool for a few seconds and, when the bird called again, a photo popped up in a heartbeat of a black-throated green warbler. What? I don’t know warblers at all, and to my memory had never even identified one. All these years I’ve been listening to a warbler? Well, I got hooked. Or perhaps a birder would say, “I got netted.”

Sometimes now I’ll just go out on our deck early in the morning, turn on the app and see what’s out there. I never fail to be stunned. I had no idea so many species were nearby and identifiable amongst what often seems to me the confusion of overlapping birdsong. Even a song I assumed belonged to the ubiquitous robin ended up being something else, in this case a black-headed grosbeak, and I am now learning by experience to distinguish them from each other. ID’ing by sound is helping me to ‘see with my ears,’ giving me cues and clues to more easily spot the bird by sight when I am able.

So that’s example number one of the reality that there is much going on around us of which we can be unaware.

There is so much going on around

us in the natural world of

which we are unaware… 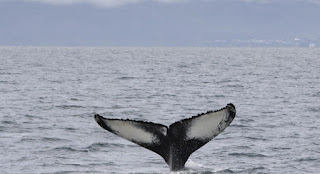 Example two. I met my friend Mark for coffee yesterday. He nearly came out of his seat (and me mine) as he regaled me with a recent whale-spotting experience. In spite of our living near the ocean for over five years here in Washington (can’t see it but can hear and smell it!), Gail’s and my whale sightings have been pathetically few, and that not for wont of watching. We watch the water all the time! But Mark knew something special was up: he could see the water not far offshore disturbed with something, as a stirred area suddenly became very popular with gathering and crying gulls, dipping and diving, then harbor seals surfacing, and finally minke whales spyhopping and fluking, taking advantage along with the others of the herring school or whatever school it was that was in session near the surface that day. The whole thing did not last long but Mark was mesmerized. Then he said, “Isn’t that amazing? There are things like that going on below the surface all the time but we never see them unless they manifest themselves.”

We never see them unless they manifest themselves.

So true, in so many ways. God’s actions are so often below the surface rather than blatant. Spiritual realities can hardly seem real. I truly wish God would manifest God’s self more often, openly for anyone to see. Don’t you? It’s something the people of Jesus’ day seemed to ask for often, in spite of the miracles Jesus performed from time to time in their very presence. Amazingly (and frustratingly), Jesus always seemed to refer them (and us) to the ways God was manifesting God’s self all the time if they just observed the signs, if they just opened their awareness to the irrational possibilities rather than only the presumed certainties.

Once in awhile, like a furtive bird one had no clue was even nearby, like a whale fluke that seems to come out of absolutely nowhere, just when we thought nothing was happening, God manifests God’s self; a veil is opened, a dimness brightens, a path appears, a curtain draws back, and we glimpse something that near takes our breath away.

I’m not a tattoo guy, but if I ever were, I’ve always thought my ink would either be a Celtic cross or a whale tail: the cross for obvious reasons, but the whale tail because a view of one has always reminded me there is nearly always something fantastic, something astonishing, something perhaps even miraculous going on underneath what’s apparent.

Posted by Rick Mylander at 10:33 AM No comments: