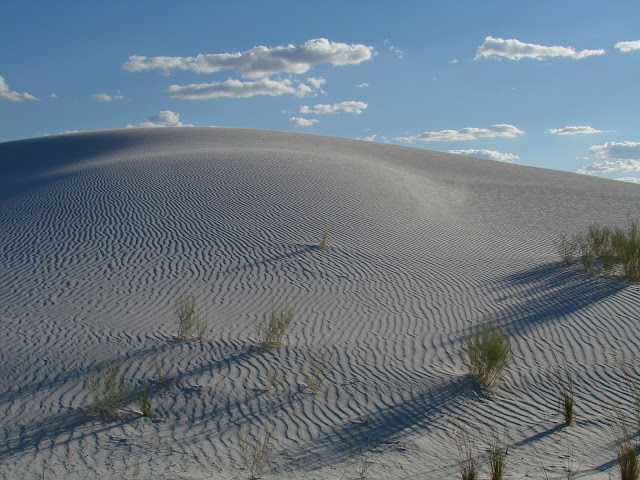 Gail and I have just completed a wonderful season of ministry among some dear new friends at a church in southern New Mexico. Working alongside the leaders and families of Sonoma Springs Covenant Church of Las Cruces will always be a life highlight for us, and we are deeply grateful for the opportunity to have shared this season with them.

Heading into this ministry experience last year, church life we knew. What we had no knowledge of was the uniqueness of New Mexico. The beauty of the state is an incredible thing but a well-kept secret, likely not a place many of you outside Colorado or Texas have visited. We were not only stunned by the loveliness of its high deserts and high mountains, and by the unique habitats formed by such things as bosques, remote canyon springs and sky islands; but we were also mesmerized by New Mexico’s geology, agriculture and human culture, and by the ways all of the above impact the area’s convergence of diverse histories, among them, archaeological and ancient puebloan histories, native American histories, and the histories of Spain, Mexico, the Republic of Texas, the Civil War of the United States, the American west, and the more recent Atomic and Space Ages. I don’t know that I have ever been surrounded by a more diverse conglomeration of habitats and histories. 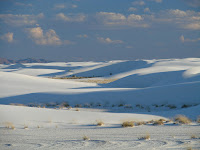 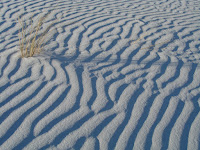 Of course, while there we did as much hiking as spare time allowed, even encountered our first rattlesnakes and tarantulas while doing so! (We had actually been surprised never to have seen them before, what with all the traipsing we do.) But since our love for the people we worked with there and our delight with the state will not fade, I thought it timely once again to focus my photo(s) of the month on one of New Mexico’s less-known natural lovelies, one of our favorites, White Sands National Monument. Just northeast of Las Cruces, it was established in 1933 by President Herbert Hoover to protect a unique landform created through a coincidental cooperation of wind, precipitation, topography and geology. Not really ‘sand’ in the technical sense (which is made up of quartz-based silica and rock particles), these dunes are made of gypsum particles, a soft, water-soluble sulfate mineral, the main component of plaster and chalkboard chalk. 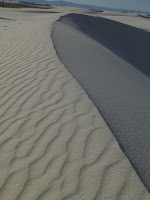 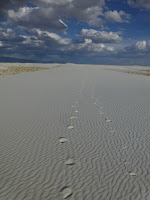 The dunes form in this way. Area precipitation is impounded in what is called the Tularosa Basin, a 6,500 square mile bowl surrounded by mountains, with no riversheds or outlets to drain it. Dissolved gypsum from the mountains flows with water into the basin, and as that water evaporates or sinks, gypsum selenite crystals are formed on the desert floor. These in turn crumble, and crumbs are picked up by prevailing winds and deposited on the dune field. Now, if it’s water-soluble, I’m not sure why the whole thing doesn’t just melt when it rains, so I’ll have to keep studying that! Suffice it to know, in regards to comfort, that these picturesque white sands remain fairly cool to the feet in the hot sun compared to regular sand, and, in regards to beauty, are especially good at picking up apparently blue shadows in the morning and evening as the sun is low in the sky. It all makes for a fantastical sort of environment to enjoy – hiking, dune running and jumping, unique moonlight concerts, even year-round sledding! And by the way, White Sands National Monument is the largest gypsum dune field in the world, 275 square miles in size.

I love dunes. It not only brings me back to my church youth group days as a teen, and our many trips to sand dune beach parks near Chicago on Lake Michigan. It also reminds me of God’s heart toward you and me expressed by David the Psalmist: “How precious to me are Your thoughts, O God! How vast is the sum of them! If I should count them,
they would outnumber the grains of sand…” (Psalm 139:17-18)

Blowin' in the Wind: Pope Francis and Laudato Si' 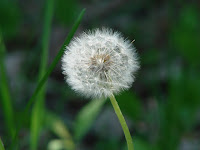 Many of you have paid attention to the news this week and have read or heard of Pope Francis’ Laudato Si’ Papal Encyclical on the environment. It is a landmark document, long awaited not only by the church but also by all who love God’s creation. Indeed, it is addressed to ‘every living person on this planet;’ How’s that for an audience? I guess a pope can do that.

Here’s something the New Zealand Herald said about it:

While the encyclical will influence the political debate, its most powerful impact could come in its instruction to the world's 1.2 billion Catholics through an "ecological conversion", transforming their own lifestyles to cut waste and end the "throwaway culture…” If taken as seriously as previous encyclicals, such as Humanae Vitae of 1968 which prohibited artificial birth control, it would mean millions of families committing themselves to cooking less food to avoid waste, switching off lights and recycling.
"Nobody is suggesting a return to the Stone Age, but we do need to slow down and look at reality in a different way, to appropriate the positive and sustainable progress which has been made, but also to recover the values and the great goals swept away by our unrestrained delusions of grandeur," the Pope said.

These can only be good developments. 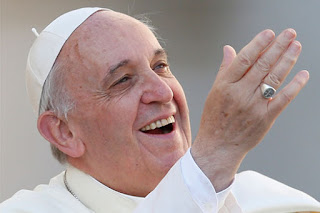 I love the title, Laudato Si’, Latin for “Praise Be to You.” Subtitled “On the Care for Our Common Home,” the main title is taken from the first words of St. Francis’ great 13th Century hymn of praise for creation, Canticle of the Sun, about which I wrote in one of my earlier blogposts nearly two years ago. (I also wrote elsewhere on the hymn based upon St. Francis’ Canticle, All Creatures of Our God and King.) I find it lovely that the Pope chose to honor his namesake in this way.
Though the focus for my blog is going to be Pope Francis’ prayer included in the encyclical, here are several of the document’s key points:

- Christians have misinterpreted Scripture and "...must forcefully reject the notion that our being created in God's image and given dominion over the earth justifies absolute domination over other creatures."

- The international community has not acted enough: "Recent World Summits on the environment have not lived up to expectations because, due to lack of political will, they were unable to reach truly meaningful and effective global agreements on the environment." He writes, "The Church does not presume to settle scientific questions or to replace politics. But I am concerned to encourage an honest and open debate so that particular interests or ideologies will not prejudice the common good."

- But individuals must also act. "An integral ecology is also made up of simple daily gestures which break with the logic of violence, exploitation and selfishness."

- Technocratic domination leads to the destruction of nature and the exploitation of people, and "...by itself the market cannot guarantee integral human development and social inclusion."

- Finally, by the way, what is one of the main tasks we have on earth, "...but to be stewards of God's creation?"

The Pope ended the document with a prayer for our Earth that he has asked Christians and others around the world to pray, one that connects faith with nature. (What a concept!) Will you join me in praying this?

High Lord, Who art present in the whole universe
and in the smallest among your creatures,
You who envelop with Your tenderness everything which exists:
You pour into us the strength of Your love,
So that we can take care of life and beauty.
Flood us with peace, so that we may live like brothers
and sisters without harming anyone.
Father of the poor, help us deliver the abandoned and the
forgotten of this earth that mean so much to you.
Restore our life, so that we may protect the world,
not so that we may plunder it,
so that we seed beauty, not pollution and destruction.
Touch the hearts of those that only look for advantages
at the expense of the poor and of the earth.
Teach us to discover the value of everything, to contemplate
with wonder, to recognize our being deeply united with all
creatures on our path toward your infinite light.
Thanks for being with us every day.
Please support us in our fight for justice, love and peace. Amen.

Posted by Rick Mylander at 8:57 AM No comments: 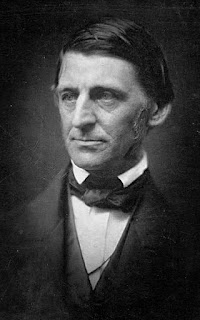 “Miracles have ceased,” he said. Said I, “Have they indeed? When? They had not ceased this afternoon when I walked into the wood and got into bright, miraculous sunshine in shelter from the roaring wind…”
~~Ralph Waldo Emerson

Though the 1800’s Transcendentalism movement in American philosophy is not well-known for its pure Christian orthodoxy, nor are its adherents, some of its members do reflect a Christian worldview. Ralph Waldo Emerson (1803-82), the leader of the movement, certainly had a far different spiritual theology than I, but I still deeply appreciate the spirit behind the philosophy, and behind many of his writings as well. The above quote was taken from his extensive journals.

At its core, Transcendentalism was a pseudo-religious pseudo-Christian philosophy that intentionally contrasted with Unitarian doctrine and the highfalutin’ intellectual climate that pervaded New England at the time (1830’s ff.). And though it was not into organized religion, it held strongly to the basic goodness of people, and even nature in general. And from what I see in Genesis 1, where even God calls his creation very good (Genesis 1:31), that’s pretty hard to argue against.

Better than Emerson, and certainly also in agreement with Genesis, are the words of David the Psalmist in Psalm 139:14 – Marvelous are your works (O Lord), and that my soul knows very well!

Marvelous are your works, and
that my soul knows very well!
~~David the Psalmist

Have a blessed weekend!