From My Nature Journal: Thanksgiving and the Sunshine Singer

Just in time for Thanksgiving, I'd like to share one of my absolute favorite Swedish hymns from my Covenant denominational heritage. I actually don’t know much about the text’s author, a Salvation Army poet by the name of August Ludvig Storm, except to say that he lived from 1862 to 1914 and resided in Stockholm. The one I want to say more about in this post is the author of the music, Johannes Alfred Hultman. I feel I know the man. 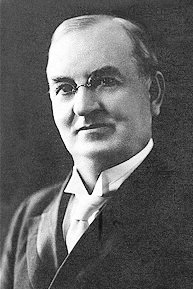 “J.A.” Hultman, as he was publicly known, was a wildly popular musical entertainer among the Mission Friends of Sweden and the USA in the late 19th and 20th centuries. (“Mission Friends” was a common name for early Covenanters, a name I still dearly love and wish we used more often!) Born in 1861 in the poor, central Swedish province of Småland, his family emigrated to the states when he was eight years old and settled in rural Southwest Iowa near Essex. Early vocational ministry found him directing a church choir in Chicago (Douglas Park Covenant), and later pastoring churches in Nebraska and Massachusetts. While pastoring, however, he hooked up with Swedish theologian P.P. Waldenstrom in an 1889 speaking/evangelistic tour, bringing along his small, portable pump organ and providing music for the sessions. His time with Waldenstrom, famous and infamous in the US and northern Europe, marked the beginning of a change that led to Hultman’s taking up a full-time traveling and singing ministry that lasted half a century.

Known everywhere he went as “The Sunshine Singer,” his positive music and gregarious, sincere persona were a perfect fit to bring encouragement to immigrant Swedes, many of whom were rural or inner-city poor. The sunshine moniker came from an experience he had where he had been suspected in his travels of being a bootlegger, carrying alcoholic contraband in his wooden organ case. His response while being inspected? “I don’t deal in moonshine, I deal in sunshine.” (Last time I knew, the organ’s case was still being displayed among the archival artifacts in the vestibule of First Covenant Church of Omaha. I’m not sure of the story behind how it got there, and would love to be schooled. Interestingly, the church I am serving right now, Bethlehem Covenant of Minneapolis, also has an antique, portable and ‘boxed’ pump organ in its vestibule, one that was played by Hultman at the church’s building dedication in 1941.)

Hultman was well known both publicly and privately to have a good-natured humor which included playful self-deprecation. At a time when most traveling musicians supported themselves by selling copies of their music, in much the same way some entertainers do today with recordings, he was often quoted at concerts as saying, “I’ve brought along collections of my music that are available for purchase. The booklets cost a dollar, but I include my photograph as well and that changes the price dramatically, so I sell both for fifty cents.”

Deeply loved on both sides of the Atlantic, Hultman sang and presented evangelistic services continuously from the late 1800s until his death at age 81 in 1942. As I’ve said in the past, I’m something of a sentimentalist when it comes to music, and many Scandinavian texts from my heritage play to that sentiment, including this one. Read it below, and, if you can, celebrate it as a testimony of faith. And if you don’t know it, or if it has been a long time since you’ve heard it, check out this YouTube link.

Here it is, Thanks to God for my Redeemer, text by Ludvig Storm, music by J.A. Hultman:

I am told the original Swedish included the word thanks thirty-two times in the three verses. In this English translation by Carl E. Backstrom, it’s only said twenty-seven times, but I think the point is still well taken!

Posted by Rick Mylander at 1:29 PM No comments: