From My Nature Journal: The Ephemerals Part 2

Some time ago, I wrote of an encounter with early spring wildflowers we had never seen before in the Upper Peninsula of Michigan. Though we had arrived to open our little cabin in the woods at the normal Memorial Weekend timing, winter had conspired that year to hang on for dear life, so that ice-out on the lake did not take place until the second week in May, the ground held its winter frost abnormally, and the normal early wildflower ephemerals we had typically missed were quite late in blooming. We saw for the first time Trout Lily and Hepatica, Wintercress and, my favorite, Dutchman’s Breeches, along with the more familiar-for-the-date Skunk Cabbage, Marsh Marigolds, Trillium and Spring Beauties.

This year is the first since our move to Western Washington several years ago that we have been able to enjoy a long spring without needing to be away from our Whidbey Island digs. As a result, we have been able to enjoy a brief but lovely season enjoying this habitat’s ephemerals. Of particular delight are the Coastal Rhododendrons, Washington’s state flower, that bloom almost absurdly pink, huge and showy in the dark and wet coniferous forests (about which I have also written earlier). But of additional delight are also the rarer prairie plants at a unique historic prairie remnant quite near to our Coupeville home. On property owned by Pacific Rim Institute, a Christian faith-based environmental organization, it’s just down the road from us on land that formerly housed of all things the Washington State Pheasant Hatchery. Somehow a small backset tract of five acres here have avoided the plow over the last 170 years on this intensely but carefully farmed stretch of twelve thousand or so acres of natural prairie on central Whidbey, a habitat very rare to western Washington. It’s that same immediately-plowable prairie that brought permanent European settlers to the area in 1850, one of the earliest non-native settlements in the Oregon Territory in spite of it being an island. But back to the unique remnant: as a result of it never being tilled, this small parcel contains native prairie plants long stewarded by first nations peoples, and one of PRI’s tasks has been restoring area prairie habitat by protecting native blooms and collecting seeds, propagating them for replanting in other places. 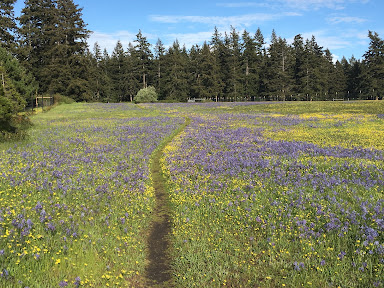 Breathtaking are the huge but short-lived spring stands of the bluish-purple Camas Lily, a plant not currently threatened but still surprisingly rare compared to its former profusion. Native Americans dug camas tubers soon after their flowers dried, and ate them raw, roasted like potatoes, or dried and ground to make bread. (Such were ‘enjoyed’ by the Lewis and Clark expedition, though its final impact upon its Anglo members was recalled as less than pleasant!) Another spring beauty is the intensely yellow Spring Gold, aka Foothill Desert Parsley. Closely related to the almost-always-nearby Barestem 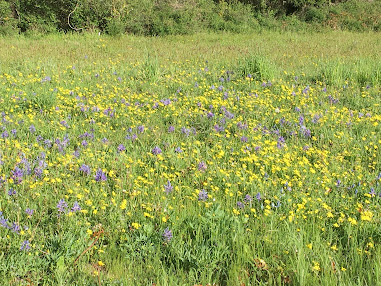 Biscuitroot, a bloom that for all the worls  world looks to me like exploding fireworks, both are members of the biscuitroot genus, which also gives indication of their indigenous use. A special favorite of Gail and mine (we’ll leave you to guess why) is the Chocolate Lily, a species in the state’s sensitive category, with its unusual brownish-purplish petals. How often do you see a flower with brown petals?! And no, it doesn’t taste like chocolate, though like Camas it is edible. But the real spring showstopper on this prairie remnant is the rare and deeply-hued Golden Paintbrush, said to be growing naturally in only thirteen places in the world, nine of which are on Whidbey Island. This is the plant that Pacific Rim seems almost to be bringing back from extinction’s doorstep, so much so that it has been able to be downlisted from endangered to threatened status in the state. Gail and I always loved the prolific orange and red-orange paintbrush of Colorado’s high plains and foothills when we lived and hiked there, so this seems like coming across its rarer cousin, its ‘brother-from-a different-mother,’ or, in this case, its Creator! 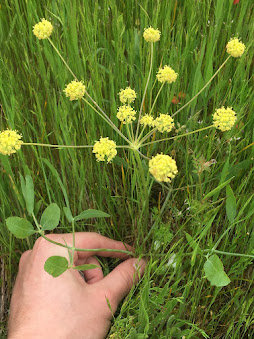 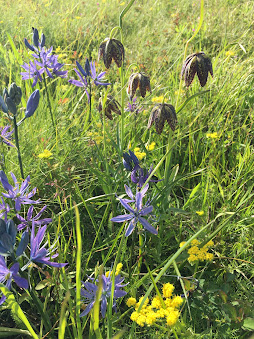 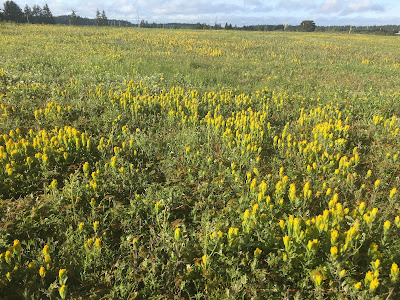 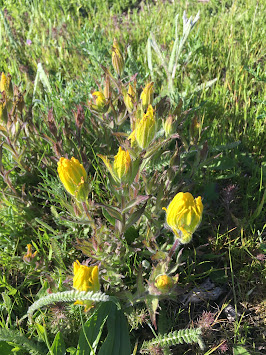 Western Washington’s forest and prairie ephemerals seem to last somewhat longer than those we have found in the Midwest’s northwoods, but one still must be ready to get out there pretty quickly to enjoy them before they’re gone. And the very term ephemeral gives us a clue to this reality. As I mentioned in one of those earlier posts, ephemeral is from the Greek ephemeron, which means ‘liable to be cut short,’ a good descriptor for a bloom that might last in some cases only a few hours or days. Understandably, ephemeron is from the same root as the common Biblical word daily, the word we use in the Lord’s Prayer when we pray, “Give us this day our daily bread.” If I remember correctly, I think it is also the word used in Exodus 16 in the Septuagint (an early Greek translation of the Hebrew Old Testament), when the Israelites are told to daily gather manna sufficient only for a single day, in other words, to trust God that God will continue to daily provide for them again the next day. Thinking about and meditating on this Biblical word has added a lovely meaning and deeper appreciation to our early spring wildflower-gazing and identification. Give us this day our daily blooms as well as all our daily needs.

And speaking of ephemerals:

As for people, their days are like grass. They flourish like a flower of the field, for the wind passes over it, and it is gone, and its place knows it no more. But the steadfast love of the Lord is from everlasting to everlasting upon those who fear him, and his righteousness to children’s children, to those who keep his covenant and remember to do his commandments. (Psalm 103:15-18)

Consider the lilies of the field, how they grow; they neither toil nor spin. Yet I tell you, even Solomon in all his glory was not arrayed like one of these. But if God so clothes the grass of the field which is here today and gone tomorrow… will he not much more care for you…? Therefore, do not be anxious… (Matthew 6:28-31, portions)

The grass withers, the flower fades, but the word of our God will stand forever. (Isaiah 40:8)

May you and I be completely and ephemerally assured of the blessing of God’s daily care.

Posted by Rick Mylander at 7:29 PM No comments: