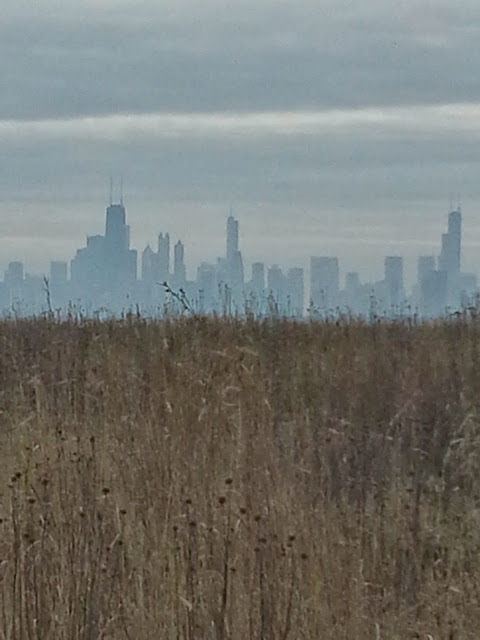 Although it is only a quick photo off of a phone camera, Gail and I took this early this month while in Chicago. And though the focal image is not strong (it was a foggy day, after all), the mental image is.

It is, of course, the famous Windy City skyline (IMNSHO the most beautiful skyline of American cities) taken above prairie plants. It reminded me of something about which I had been thinking of writing.

A beloved relative who shares a love for nature with me told me once, “You are so lucky you can live in a beautiful place to enjoy nature.” I told her that nature’s beauty and bounty is nearly everywhere if one has a patient eye to see it, or a broader definition to recognize it, and that she herself was surrounded by far more than she realized. (She, too, was from Chicago, and in fact lived within a five-minute drive of one of my favorite childhood Forest Preserves!) The place represented in the photo is one such example among the many we have enjoyed in the Chicagoland area.

This one is small, barely known except by birders, but it also enfolds the last natural sand dune habitat within city limits. It is the Montrose Point Bird Sanctuary located at the east end of Montrose Avenue (4400 North) on Lake Michigan. Quickly accessible from the vast Montrose Beach/Montrose Harbor parking area, it is additionally known colloquially among naturalists as “The Magic Hedge” for its charmed attraction of birds of all kinds that frequent the various central flyways, especially during migrations and in winter. The Audubon Society has even designated it as one of our country’s critical IBA’s, or Important Bird Areas. Many of these are in major metropolitan environments.

Nature’s beauty and bounty is
nearly everywhere if one has a
patient eye to see it, or a broader
definition to recognize it...

So, can one enjoy nature in the city? I certainly believe so! Set me in a room with a window that gives me eyeshot of a tree or the sky and I’ll be happy! But as I mentioned to my relative, it’s out there -- we just might need to be a little more diligent in seeking it out. My sister Carolyn is actually my hero and inspiration in this regard. A life-long naturalist and birder, she has introduced us to more natural areas in Chicago than I could count! Years ago she familiarized me with a fantastic organization called Chicago Wilderness, which ran an excellent printed magazine of the same name from 1997-2009, all of which is archived and freely available to any who would like to access it. It is just one more indication that urban nature is available to those who seek it. I’ll never forget the article I read years ago (Time Magazine? Audubon?) about the dozens of bird species a birder counted one afternoon while attending (and ostensibly watching) a Chicago Cubs baseball game at Wrigley Field!

People tend to define natural beauty way too narrowly -- mountains, lakes, shorelines, forests, __________ – fill in your own blank. Interestingly, I think we too often do this with God as well, that is, define God way too narrowly, or at least define God’s control over or interest in our lives too narrowly.

Let’s open our eyes. Let’s see God in God’s bigness, avail ourselves to God’s surprises. And let’s see the beauty and diversity of God’s creation similarly. In both, the possibilities are endless.

~~RGM, December 11, 2013
P.S. Coming up next week? Something from my nature journal on Christmas and the winter solstice…
Posted by Rick Mylander at 10:19 PM