Blowin' in the Wind: Webcams and Nature 365

I’ve a different kind of Blowin’ in the Wind post this week, an alert to direct you to three timely online nature resources you can check out while the checking is good.

For several years I’ve followed a couple of live web cameras online that take me into the very nests of two of my favorite critters -- eagles and loons. Webcams can be fascinating things. Some time ago, I followed one for a while that brought me to a small pond in Africa where many a beast came for respite and drink. Once in a blue moon there’d be something dramatic to see, but usually it was just the simple and routine lives of animals coming and going, not unlike if a camera were propped somewhere in a corner of your kitchen to view the pedestrian things that typically happen there! One of the things I loved about that webcam, though, was that no matter what was being viewed, there were almost always jungle sounds, especially at night when the camera screen itself may have been dark. What a fantastic, relaxing drone as background for winding down for the day! 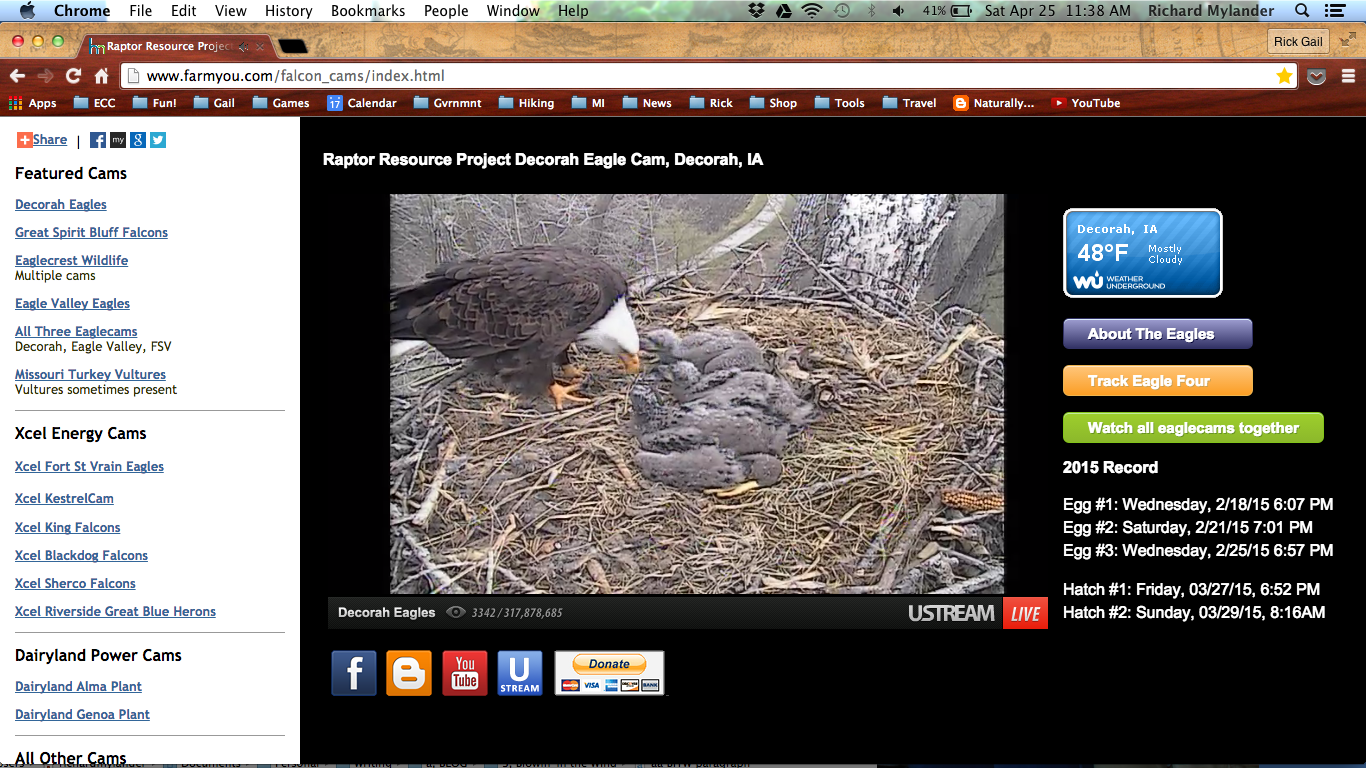 The eagle-cam is located in an aerie in northeast Iowa near the city of Decorah. (One of the things that is fun for me about this webcam is that I had the privilege of helping plant a church in that city some years ago, and I enjoy imagining the parent eagles hunting somewhere there along the Upper Iowa River or flying high over old friends.) Aeries can be huge, six feet or more in diameter, with the parents, who mate for life, adding more and more branches each year until it can weigh a ton or more. Inevitably the nest comes crashing down out of sheer tree fatigue, which we have seen numerous times in the northwoods. This year in the Decorah nest, three eggs were laid in mid to late February, with all three eaglets successfully hatched about five weeks later in late March. They’re nearing a month old at this point, and the last I checked a couple days ago fresh rabbit was the menu du jour. Things will intensify as the three grow, start jostling for advantage, and begin to fledge. This particular site even allows you to search archived video of significant moments in the family’s life, and that of past families, by hitting the ‘About the Eagles’ button on the right. Hit this link to see live video, even at night. 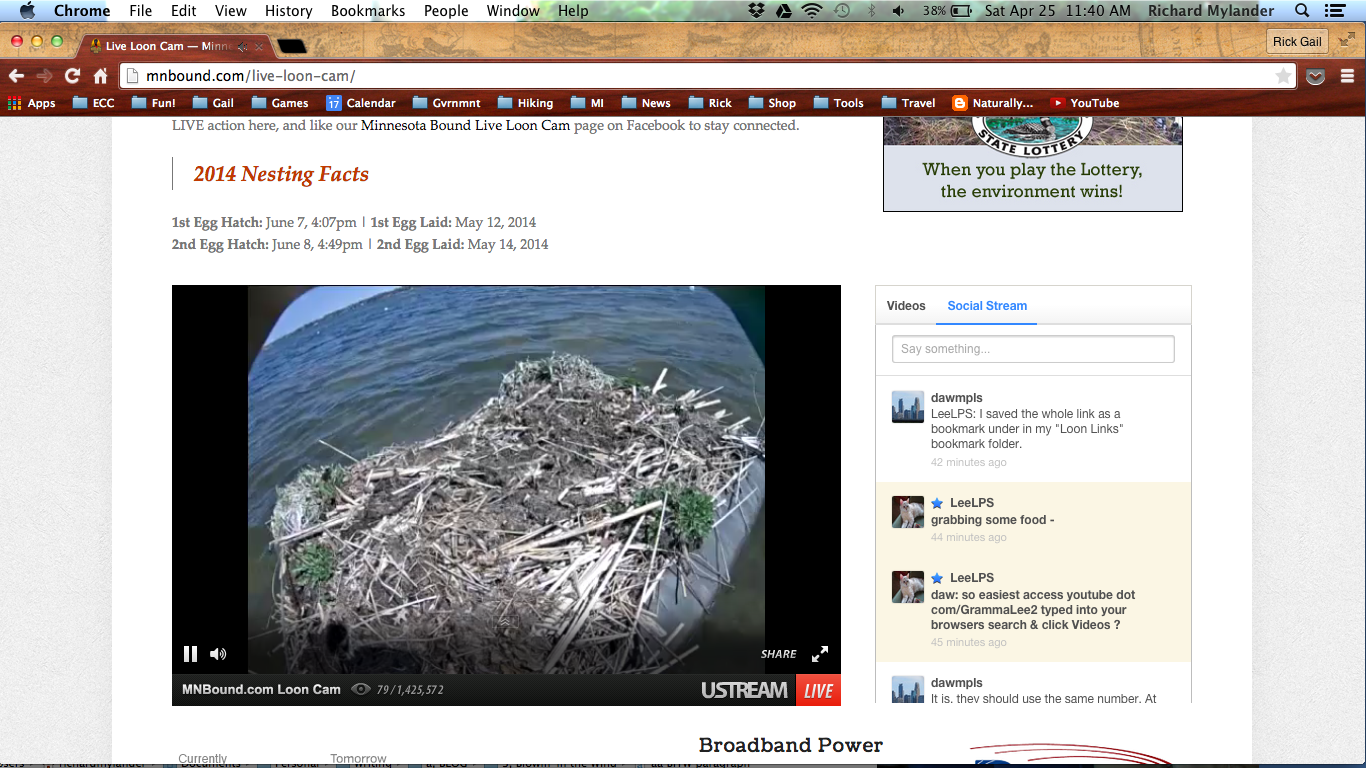 By contrast to what you can see today on the eagle-cam, all will still be still on the loon-cam with the possible exception of waves lapping against the nest – it’ll be some weeks before the loon parent occupies it. And there’s way less drama anyway in a loon nest than the eagle’s, simply because the chicks will not be raised in it; in fact, they can leave the nest the very day they are hatched, or will spend no more than a day or two in it. Then the whole thing will never be visited again until next year, and it’s solely lake life for the family until flight lessons in late summer and departure for winter before the lake freezes over. But the lack of nest drama is more than made up for by the simple and unique loveliness of the bird! For now, though, be patient: you won’t see the nest occupied until mid-May at the earliest; once laying takes place, both mom and dad (who also mate for life) will take turns keeping the eggs warm for about twenty-eight days before chick birth. This loon-cam is located on a man-made floating nest island in a lake somewhere in central Minnesota, an area where we once lived. (How appropriate… The state bird of Minnesota, after all, is the loon.) Typically, a loon nests in a secluded spot on land or atop a muskrat lodge, but floating nests have been created in some areas to increase chick survival by providing nest sites completely isolated from possible adult loon or egg predators (coyotes, bobcats, raccoons, weasels, snakes, etc. – it’s a jungle out there!). With this particular webcam’s image, and depending on the time of day that you look, you can even see the shadow of the camera mount sweeping from side to side across the nest. Here’s the link to this site. 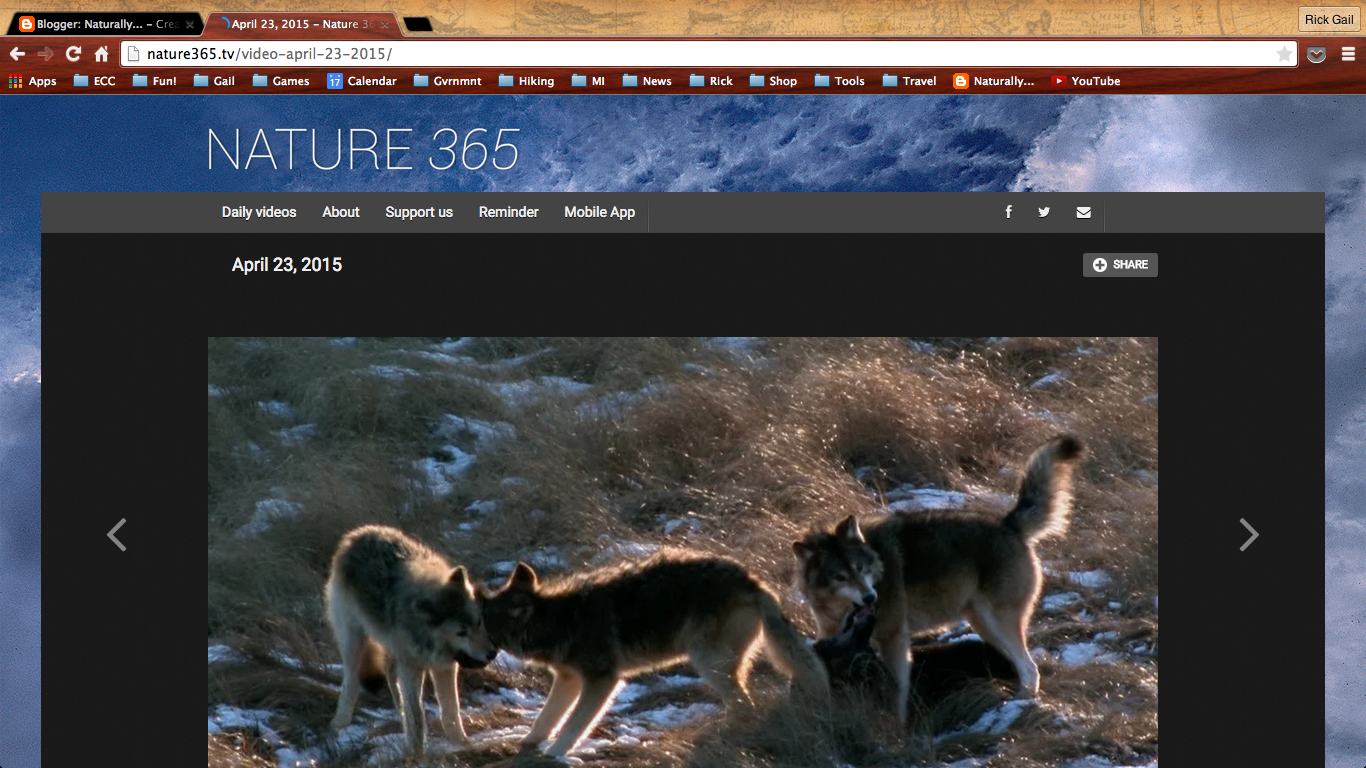 I said I had three resources. The third is also something quite unique, from the camera of outstanding nature photographer Jim Brandenburg, also of Minnesota. Though I was acquainted with Brandenburg’s stills, he has taken thousands of hours of video, simple seasonal scenes, and with a producer from France edited a daily video of one minute or less duration that is called Nature 365. He is posting a video every single day this year, appropriate to the season. One can easily subscribe to receive a daily link via email; it’s always one of the very first things in my inbox each morning, and I’ve found it a delightful way to start my day, especially on days when my schedule might require me to be nature deprived! My sister Carolyn directed me to this site back in early February, having come across it somehow, and I have been watching ever since. All the videos are archived, and since Brandenburg typically follows a theme for several days at a time (the activities of a wolf pack, for example, of migrating swans or cranes, or simply of a river’s ice melting and breaking up or dry winter grasses waving in the breeze), you can go back and check out the archives every seven days or so and find particular things for which you might want to have a more complete look-see.

Getting behind some of the scenes of nature in remote places… We don’t often have an easy opportunity to do that, but it’s a perspective these three web resources provide. God asks Job in Job 39, “Is it by your wisdom that the hawk soars, and stretches her wings toward the south? Is it at your command that the eagle mounts up, and makes his nest on high? On the cliff he dwells, and makes his home, on the point of the cliff, and the stronghold. From there he spies out the prey, seeing it afar off... Shall he who argues contend with the Almighty? He who argues with God, let him answer it.”

Though God’s ultimate questions to Job can only be directed back to God, Who alone has the power to direct his creation, we at least get a chance to have a look at things we might never get a chance to see.