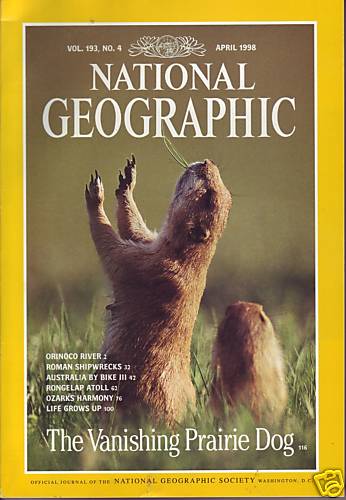 OK, I know, I know, I’m taking great license here with my borrowed photograph. It’s an actual National Geographic cover but you won’t find the article therein saying anything about prairie dog spirituality. I simply think it’s a very funny photo when paired alongside the concept.

But here’s the thing: I’ve got prairie dogs on my mind… There’s a colony right behind our backyard fence that is definitely growing in its geography! Several days ago I ran one out of our yard, imagining only that it was an emboldened scout recruited to case the joint and see where a new entry/exit mound might be able to be excavated. I’m not even exactly sure what I’d do if this happens. They’re cute little critters, so my wimpy compassion would likely rule the day (though I’ve felt no remorse trapping rabbits from my yard and relocating them, an effort I have since jettisoned as fruitless). Extermination seems extreme (yes, there’s even a product for it called Rodenator…), and professional relocation is expensive. But I’d have to think of something.

So the day I chased Kit Carson away, I sent a quick email out to my neighbors to see if any of their yards had been encroached. I quickly got a response and photo back from our friend Jerry, across the street mind you, even further away from the field behind our house. Here’s the photo he sent: 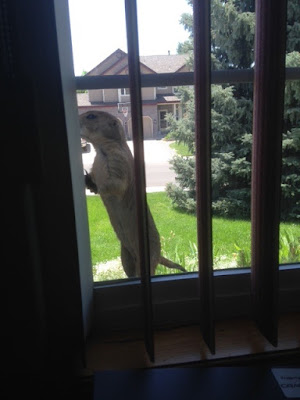 I laughed out loud. Jerry says this guy had scaled four feet of masonry and looked in his office window when he snapped the picture. Now that’s scout dedication! Was it not just interested in an entry/exit mound but a break-in? Sure looks like it. Maybe it was checking to see if Jerry’s yard might come with a nearby beer cooler. 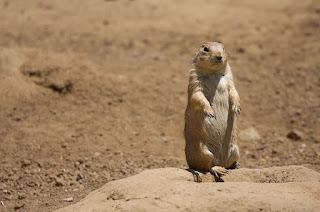 Of course, prairie dogs, a keystone species, are not dogs at all but burrowing rodents, with slightly longer and fatter bodies than gray squirrels but shorter (and shorter-haired) tails. Endangered in some locales, they’re prolific in Colorado and many interior west rangeland states; in fact, ranchers tend to be adamant about their destruction while city people are most often their advocates. Though colonies can be scores of acres large, they don’t always require much land to establish themselves – we see them often in the city limits of Denver in the grassy areas along freeway entrances, not the safest place in the world. Colonies are easy to spot due to the mounds the little guys create around their burrow holes, by which they can keep better watch of their surroundings for predators. The dog moniker comes from the little ‘bark’ they make to alert their compatriots when danger is near. (I guess that must mean me, as they always bark when I go out to our backyard.) Interestingly, they're one of the curiosities Lewis and Clark brought back alive to President Jefferson in Washington DC after their 1804-06 excursion to scout the American West, and may at that time have been the most abundant mammal in North America, some say a billion in number; but habitat loss and extermination have reduced their numbers to 10-20 million today. Highly social and playful, they live in close-knit family groups called coteries.

If you’re interested in seeing more, here’s a link to an interesting piece my sister sent me about them.

Precociousness and history aside, though, I’m still not sure what I’m going to do if they tunnel under the back boundary and show up in my yard. Maybe if they’re Christian prairie dogs, I can, in the spirit of Christlikeness, peacefully convince them to stay on their side of the fence. And praising the Lord? I suppose if Jesus said that the rocks would cry out their praise if the people failed to (Luke 19:39-40), anything is possible.