POTM...*: Something to Die for in Alaska

I am homeward bound tonight on a flight from Alaska, having this week delivered back to Anchorage our two oldest grandchildren, nine and six, following their too-brief summer Grandma and Grandpa visit. Alaska, what a place! If you’ve never been to the 49th State, get it on your to-do list if it at all possible.

Years ago while our children were all still in elementary and junior high school, Gail and I enjoyed our first vacation there. It was 1992, and we visited my airman brother Cully and his family who had gone there upon assignment to Elmendorf Air Base; he consequently made Alaska his home for the remainder of his life. Since our daughter and her family moved there in 2005 to assume a ministry call, we’ve been blessed to get there at least annually, and Kate and Phil seem desirous of following Uncle Cully’s pattern. Time will tell. But it was way back in ’92 when my brother and sister-in-law took us all up to the Eagle River Nature Center of the Chugach State Park for a picnic, and we were introduced to the amazing life cycle of salmon. On that brief interpretive boardwalk along the upper Eagle River headwaters, I saw a series of markers I’ve never forgotten. So this week I asked my daughter if we might go there as time allowed and see those interpretive signs again if they were still there. They were.

The Eagle River is one whose headwaters run unobstructed to the ocean, and as with many streams between Alaska and Oregon, the varied salmon species begin their lives in those headwaters: of every batch of eggs laid down -- four thousand eggs by a healthy female -- only two individuals return successfully after their dangerous and long lives to congregate with others, perpetuate the species and then die. Say nothing of the navigation skills required to perform this feat. (How do they do it? Earth magnetism? Sense of smell? Simple memory?) I was simply moved by the math twenty-three years ago, and still am. Here is the breakdown:
-- A healthy but dying female lays four thousand eggs in a nest called a redd, which are fertilized by a healthy but dying male and then covered up in light sand and gravel. About eighteen hundred are lost to disease and disturbance. About twenty-two hundred hatch in a few weeks, and the hatchlings, called alevins, remain buried for three months living off their yolk sacs. Of these, another eighteen hundred are lost to bird and fish predation.
-- Of the original number, only 400 fry eventually emerge from the sand, but 360 of these are eaten by birds, fish and each other. This leaves merely forty, called smolt, who make it to the sea.
-- In saltwater the fish grow quickly, with the various species maturing in two to six years. Of the forty that make it to the ocean, eighteen on average become food for whales, seals, sea lions, porpoise and other fish, and eighteen more are caught commercially.
-- This leaves four of the original number who return to the stream of their birth. Two of these will be caught and eaten by bears, eagles and humans, and two will remain to find the headwaters and spawn another four thousand eggs.

Isn’t that amazing? Seeing it put this way is not only interesting to me but sobering, provoking a thoughtfulness that only increases my respect for and love of life. Every life cycle is a precious thing, life itself always priceless. You and I have a life cycle as well, yet it is one with a difference: we can be homeward bound for eternity. Jesus said, "Listen carefully: unless a grain of wheat is buried in the ground... it is never any more than a grain of wheat. But if it is buried, it sprouts and reproduces itself many times over. In the same way, anyone who holds onto life just as it is destroys that life. But if you let it go, reckless in your love, you'll have it forever, real and eternal (John 12:24-25, MSG)."

Before I close this week, let me say something about the four photos below:
1, The first looks east up the glacial valley from the Eagle River headwaters toward the snowpeaks and glaciers that provide the river’s frigid initial flowage.
2, The second is a pond eddy along the way; it is difficult to see, but you may notice a red tinge in the nearside of the pond, a teeming school of salmon pausing in their up-current, final migration. Salmon are silver in the ocean, but their entry back into freshwater at life’s end slowly changes their color to a deep red as their vitality ebbs. By this time, they have already stopped eating and are intent on only one thing, getting where they need to go and taking care of business.
3, The third shows several salmon working their way upstream under a boardwalk vantage point. I’m not sure what species they are, but imagine my son-in-law Phil could tell me.
4, The fourth presents a friend we watched fishing for about a half hour, back in that pond from photo two, a brown (or grizzly) bear in the wild. It was about forty yards away, and seemed way more intent on the fish than on those of us watching from the boardwalk. Besides, if it had come our way, I’d’ve had opportunity to test out the proverbial joke, only needing to outrun the slowest runner… 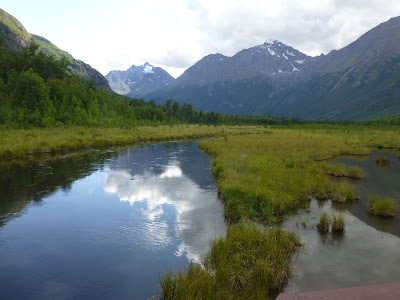 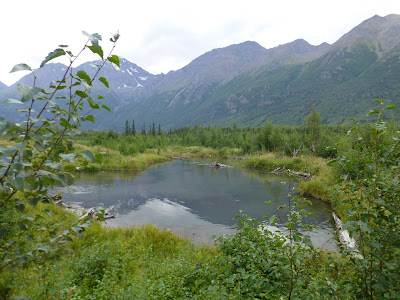 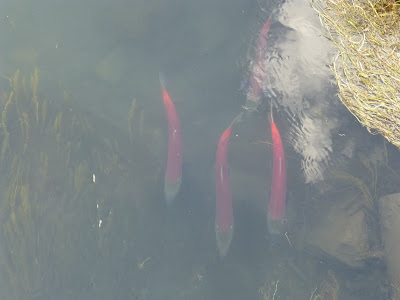 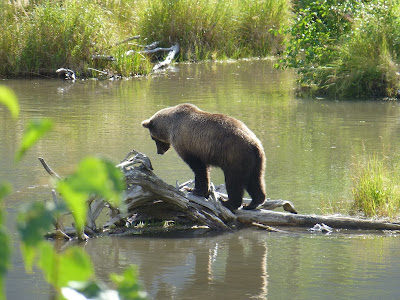