From My Nature Journal: “Holy Buckets in the World is THAT?”

And the Lord spoke to Moses, saying, “I have heard the murmurings of the children of Israel. Speak to them, and tell them, ‘At evening you shall eat meat, and in the morning you shall be filled with bread: and you shall know that I am the Lord your God.’” It happened at evening that quail came up and covered the camp; and in the morning the dew lay around the camp. When the dew that lay had gone, behold, on the surface of the wilderness was a small round thing, small as the frost on the ground. When the children of Israel saw it, they said one to another, “What is it?” For they didn’t know what it was. Moses said to them, “It is the bread which the Lord has given you to eat.” …The house of Israel called its name Manna (which is to say, “What is it?”), and it was like coriander seed, white, and its taste was like wafers with honey. (Exodus 16:11-15, 31) 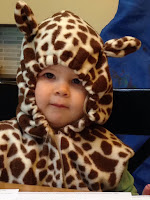 Several months ago, our two-year-old granddaughter Myla, pictured at left, coined a new phrase that has taken on with the rest of our family. While several of us were out for a saunter together, she saw something that startled her, opened her eyes wide and blurted out, mixing her newly-learned phrases, “Holy buckets in the world is THAT?”

I recently had one of those ‘holy buckets in the world is THAT?’ moments, and it still has me scratching my head in wonder.

We are up for a few early fall days to close for the year our little cabin in the big woods of Michigan’s Ottawa National Forest. Among the many things to do, large and small, I remembered I had not yet pulled the thermometer that hangs off the end of our dock out of the lake. I was also curious, of course, to know the difference in water temperature since we had last been here a couple months back, because if it wasn’t below 55 yet, I might even take a dip. Pulling up the five-foot string, I noticed immediately that it was heavier than it should have been, and before it broke the surface I saw something dark and strange the size of a large cantaloupe attached to the thermometer’s plastic casing. Hoisting it to eye level, it was some kind of huge, 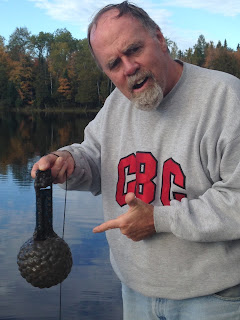 gelatinous mass of eggs of some sort, the slimy likes of which I had never seen before. Frog eggs? Fish eggs? No, it’s way too late in the season for those kinds of things. Insect larvae eggs? I took out my phone camera to take a photo to show and ask around with some of the neighbors, but my next quick question was whether or not whatever it is was good for the lake. I put it back and launched upon my search. Surely someone will know.

Yet not one of our friends had ever seen or heard of such a thing. Oh, we see weird little masses or strings of eggs floating in the water or attached to lily pads, or odd little creatures coming up out of the lake to leave their watery abode and exoskeletons behind and take flight, but this thing was unusual. So my dear wife went to the Internet on her phone (she is always much quicker than I to think of such a thing), simply keyed in “egg sac under water” and voila, up pops a URL to a site that is quickly becoming one of my new faves, askanaturalist.com, with just our answer. It’s not only fun to read the stupid questions people ask there, but it’s fun to read the great questions people also ask there. (Yes, I know, it’s only a great question if it’s my question, but there are some really stupid things people ask!)

Someone else had wondered what I wonder and included a photo. My strange mass is not an egg mass but a colony of something called bryozoa, and, I was happy to find, it is good for the lake. Nowhere could we find a completely satisfying and simple definition of what bryozoa are, but suffice it to say they are akin somewhat to coral, tiny little filter feeder creatures that clean out impurities as they ingest the water around them. Lo and behold (who knew?), there are in excess of three thousand species known around the world, fifty in freshwater, and fifteen of these in North America, mostly in southern waters. How would you like to make a living as a zoologist who studies such things? Three thousand?

And immediately when I first encountered this mystery the other day and pulled it from the water, I was reminded yet again of one of my favorite things about being a naturalist. And it can be stated in two ways.

·      One: Even after years and years of nature observation, in my case fifty or so, the curious naturalist will come across things he or she has never seen before, and never will again. For example, my daughter and son-in-law, while canoeing, came across an eagle swimming in our lake, like a breaststroker, dragging a dead blue heron to shore it had apparently taken in flight. Crazy!
·      Two: Even after these same years and years of nature observation, the curious naturalist will see things they have not the foggiest clue what they are, things that will utterly astound and mystify them. Take for example my mystery blob. (Does that make this a blob blog?)

For me, it raises the issue of wonder. Any naturalist would do well to have plenty of it. Why? Because we are naturally curious, unless it has somehow been lost along the way. Most creatures actually are naturally curious, not just cats. I can stand on the end of a dock and wave my hands at a loon a hundred yards away, or swing a towel over my head in circles, and it will often come to investigate. It’s curious. It wonders.

Where does simple awe just knock us
back a step or two once in awhile?
Where but in the natural world!

But where do you and I find wonder regularly? Where do we scratch our heads at mystery? Where does simple awe just knock us back a step or two once in awhile? Where but in the

natural world! In our scientific age, many have lost the ability to wonder, yet wonder is a wonderful thing!! Who can keep from being struck by the wonder of children? Wonder is one of the childlike graces I think Jesus had in mind when he said, “Unless you become like a little child…” I like to think that the Israelites spent many, many days in awestruck and childlike wonder about the food God was providing them before they became frustrated with the limitations of their wilderness menu.