From My Nature Journal: ‘Perpetual Wildness’ and the Human Heart

A few months ago I finished a book my son Jarrett had recommended, one I finally ended up borrowing from my Chicago brother John, Jared Diamond’s Guns, Germs and Steel: The Fates of Human Societies. (Which reminds me, I need to return it!) It’s a fascinating read, and chronicles the impact of the three named things on societal development down through human history, and, ultimately, their ongoing influence on world politics and culture, even geography, to the present day. I am jazzed by history, both human and natural, and Diamond did not disappoint. It’s a fine book…

As might be imagined, Diamond also addressed prior steps in societal and cultural development that made possible the eventual impact of guns, germs and steel. Of course, the recruitment of fire as a manufacturing method was a necessary advancement, making possible the refining of metals. Another was the development of agriculture, which brought people together to settle in closer proximity with others, in contrast to those societies in which independent and widespread hunting and gathering predominated in family groups. This sped up further social evolution: with farmers now able to produce more food than they could alone eat, simple market economies developed, allowing in time the establishment of such things as specialized guilds, skilled artisans, even civic leadership. Few things, however, had the technological ability to advance a settled ancient culture more quickly than the domestication of animals. And we’re not just talking horsepower.

Picture it. A helpful canine companion for the hunt, or feline friend for rodent control... Ox power in the field… Reliable milk and meat in the pen or shelter… Wool and skins for clothing… Surefooted and seemingly inexhaustible steeds for travel… But interestingly, animal domestication also came with a drawback. Coupled with the greater proximity of people in close settlement with each other, it was intimate animal contact that also brought about the development of serious communicable diseases, the germs part of the triumvirate. I guess some bitter almost always comes with the sweet.

But back to animal domestication, my subject of interest du jour. Historians are united in their agreement that the first animal to be domesticated was the dog, bred, of course, from wild wolves and dingoes. This had already long taken place by 10,000 BC, with the date of domestication difficult
to pin down with precision. What followed then was the domestication of what has been called the ‘ancient fourteen,’ the great, domestic, herbivorous, utilitarian land mammals, in the following likely order and timing:

Cats were in there somewhere, likely by about 8000 BC, though this is also more speculative. But I’ve never been sure they’re really domesticated anyhow. They just let us live in their house. Perhaps, in their way, they have domesticated us… 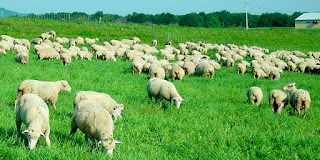 Other attempts have been made at the domestication of additional mammals, but without success. Individuals can be tamed, of course, even carnivores, but bred domestication is something else altogether. It doesn’t matter how tame a wild animal has become: some of the wild remains in it, and its offspring will be wild. I recall an interesting article in National Geographic several years ago about efforts established in Russia over a century ago, and still ongoing, to domesticate the fox, but it has not yet been successful. No doubt successful domestication took much longer than a hundred years. Who knows how long it actually took? And thousands of additional years have passed since, breed upon breed developed in some cases. Can you just imagine both Chihuahuas and St. Bernards from the same ancestors?

But here’s what I wanted to get at. I found a couple of comments in reference to domestication that were fascinating -- obvious, but fascinating, and thought provoking in relation to my nature and Christian spirituality blog. Jared Diamond says that there were animals that “…presented insuperable obstacles to domestication.” Insuperable. That means ‘impossible to overcome.’ Diamond quoted British scientist Francis Galton as putting it this way: "It would appear that every wild animal has had its chance of being domesticated, that a few… were domesticated long ago, but that the large remainder, who failed sometimes in only one small particular, are destined to perpetual wildness.”

“…Prone to wander, Lord, I feel it, prone to leave the God I love…” is the way the hymn writer said it.  The Prophet Jeremiah, speaking forcefully within a deeply degraded culture, put it much more severely: “The heart is deceitful above all things, and exceedingly corrupt. Who can know it? (Jeremiah 17:9)" Or elsewhere in Genesis 6, “The Lord saw that the wickedness of man was great in the earth, and that every imagination of the thoughts of his heart was only evil continually.”
Can my wildness, my proneness to wander,
be softened, tempered, or at least tamed?
How ‘destined to perpetual wildness’ am I?

Hmmm. Evil continually. Can my wildness, my proneness to wander, be softened, tempered, or at least tamed? How ‘destined to perpetual wildness’ am I? Are we? Lord, have mercy. Jesus: