From My Nature Journal: The Cycle

To my right, a brittle and monstrous-looking dragonfly exoskeleton clings to an alder sapling at water’s edge. Like an outgrown pair of overalls, a nymph left it behind weeks ago after climbing from the watery depths and emerging from its skin shell. We often see these lovely creatures fresh out of the lake, having climbed bush, tree trunk, even cabin walls, clinging to their outgrown suit for several hours while they unravel their wings, pump blood into their veins, and finally skitter off to do their barnstorming thing. 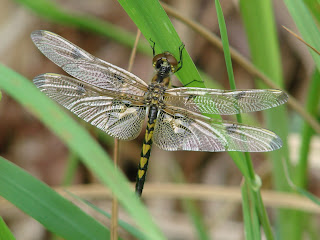 I’ve delighted this summer season in the helicopter antics of a particularly large adult that has graced the dock, vigilantly doing its part to relieve me from mosquito peskery. It seems to strike an occasional photogenic pose on the weathered wood while it surveys its hunting grounds, even lighting on me from time to time for a loftier view of its riparian domain. One time it landed on my forearm barely ten inches from my face, cocked its head several times, and stared at me with seeming inquisitiveness through its huge iridescent eyes. Is this the same one that left its used clothing hanging on its alder hook?

Yet now as I watch, a female does her little darner dance low over the water. She will die soon. But now she flits irregularly, dropping her abdomen’s backside quickly to the surface about once every second or two, depositing a fertilized egg with each dip, a seed that will sink to the bottom and, if it survives the weather and hungry fish, will ready itself for its own debut late next spring, perchance climbing this same alder. 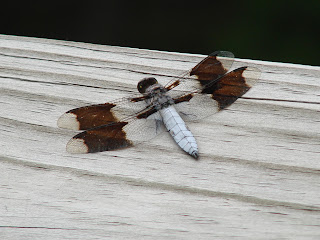 Whether all the same insect or not, I see before my very eyes a generation rising and passing, a life cycle in full, miniature to my own. What’s the difference in the grand scheme of things between a summer season and the season of a human lifetime? What’s to say that the passing of time in God’s perspective, before Whose eyes a day is as a thousand years and a thousand years as a day, is any different? This tiny one’s life cycle has its purpose and I mine. Its intention has played itself forward before my eyes, as mine does before God’s. In their proper time, both its biography and my own will be complete.

For the eyes of the LORD move to and fro throughout the earth that He may strongly support those whose heart is completely His. (2 Chronicles 16:9)

As for mortals, their days are like grass; they flourish like a flower of the field; for the wind passes over it, and it is gone, and its place knows it no more. But the steadfast love of the LORD is from everlasting to everlasting on those who fear him, and his righteousness to children's children, to those who keep his covenant and remember to do his commandments. (Psalm 103:15-18)

P.S. I wrote once before on dragonflies, but from a bit more poetic of a perspective. Hit this link to check it out.
Posted by Rick Mylander at 6:12 AM