From My Nature Journal: Perspective -- Things are Not Always as they Seem

“Gee, that little animal sure LOOKED tame,” I once heard someone say after getting bit. 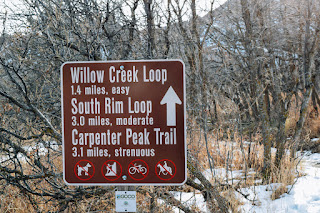 But to something way less dramatic… A couple Sunday afternoons ago Gail and I were up hiking in the mountains, to be exact, attaining Carpenter Peak in Roxborough State Park. We were high enough to overlook from the west the exact same terrain we see so often from our house, unobstructed, just eight miles or so east from where we stood. But, for the life of me, I could hardly make out a single landmark, which should have been familiar as I surveyed them from the opposite viewpoint. It reminded me how wildly different things can look from different angles, from altered perspectives. I have experienced this so many times before while hiking, of course, particularly if I am without a compass or topo to give me some bearings. And no, I am not yet a GPS guy when I hike -- that still seems like cheating to me!

Anyway, that experience has gotten me to thinking these last several days about perspective. Perspective is curious, is it not? I think of the proverbial fable of the five blind men and the elephant, a proverb befuddlingly true. But I am still astonished how quickly and easily one’s assumptions can become one’s reality, however faulty those assumptions might be. This is perfectly the case as I study nature, even if I haven’t gotten bit. I make all kinds of postulations and assumptions based on my observations and my reading, the latter of which of course is nothing but another’s postulations and assumptions based on their observations. Yet nature is full of so many surprises that I usually find my conclusions about ‘the way things are’ frequently off base, if not sometimes completely off the mark. Just when I think something should happen, something else happens. Just when I think I understand, I find my perspective has as much sometimes muddied my understanding as clarified it. Or as my dear son-in-law Phil pointed out to me recently, just when we think we have things figured out, circumstances change. We find things aren’t always as they have seemed.

It’s no wonder people in the Middle Ages had such a hard time accepting the fact that the earth was round and not flat. (Am not sure WHAT informs the assumptions of flat-earthers today…) 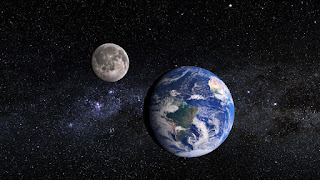 So let’s think about our good, round earth for a moment and gather a little cosmic perspective about assumptions. I’ve understood that our planet is about four times the mass of our moon. For purposes of picturing it, let’s just say that if the earth were the size of a basketball, the moon would be the size of, oh, to keep the sports theme, a Chicago-style sixteen-inch softball. OK, so maybe you had heard of Chicago-style pizza but not Chicago-style softballs, and are among the uninitiated about them; let’s ignore the sports theme and instead liken the moon then to a large grapefruit. Got it? So if the moon and the earth were these rough, relative sizes, a basketball and a large grapefruit, how far away would the grapefruit have to be from the basketball in order to reflect real nature? Let’s start by imagining that it’s about a cubit. You remember a cubit from your ark-building class, right, the span from an average man’s elbow to his fingertips? Sure you do, it was the first ruler we had, and it was even built in with the original equipment. This is about how the illustrations in our old science books depicted it. But that was just because they had to print it in that perspective in order to fit it on a page. But no, that’s not it, how about a whole arm’s length? Or two arms’ lengths, maybe a span from fingertip to fingertip? This is what I would have thought. But no. 235,000 miles is a long, long way. In order to get the relative distance as accurate as nature you’d have to haul that grapefruit nearly thirty feet away from the basketball. Only then would it approximate reality, earth to moon, the moon measuring for us about ½ degree of sky at its distance. 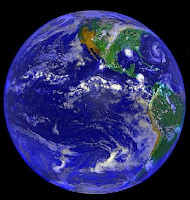 Or take another example. You may have heard that the earth’s surface is covered more than seventy percent by ocean, and less than thirty percent by landmass. Some of those ocean depths are over a mile deeper than Mt. Everest is high. That’s a lot of water, you know, that ‘the ocean’s so wide and my bark so small’ kind of thing? And I don’t think that even includes inland lakes, rivers, streams, ponds or the puddles in my driveway. So let’s again imagine the earth a basketball. If we were to gather up all the water on earth into one mass, salt water and fresh, and reflect that also as a sphere next to our basketball-sized globe, all the earth’s water would be smaller than a ping-pong ball by comparison. That’s hard to imagine while standing at the edge of Acadia National Park in Maine as a nor’easter crashes ashore. A watery planet? Apparently just barely. It sure gives an appreciated perspective on the preciousness of the stuff, and our responsibility to protect the resource as well as we can.

It’s all about perspective. Nearly everything is about perspective. Perspective is one of the reasons why we need each other so, in order that alternative views of reality can be weighed and measured together until a consensus is reached, or at least a truce.

For my part on that mountain two weekends ago, I was glad I had Gail with me. Together we were able to better discern reality from our shared perspectives than I could have ever come up with at the time on my own.

Sometimes there is a way that seems to be right, but in the end it is the way to death. (Proverbs 16:25)

Two people are better than one, for they can help each other succeed. (Ecclesiastes 4:9)

~~RGM, From a January 2013
Entry in my Leather Journal

Posted by Rick Mylander at 2:59 PM