From My Nature Journal: Solstice and its Illogical Contradiction

(Today's blogpost is a repeat of one I've done in the past, as things are quite busy right now with work responsibilities and family gatherings. But I do think a lot about this concept this time of year, and it gives me joy. Merry Christmas!) 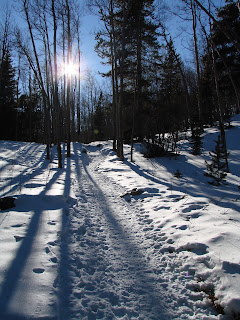 Today is the winter solstice in the Northern Hemisphere. Though the day officially launches the season we call winter, it curiously also marks a seemingly contradictory turning point: as of this day in the earth’s annual trek around the sun, the Northern Hemisphere increases its direct angle toward the sun’s rays. Consequently, here in the north, daylight will begin to lengthen starting this very day, as will our hemisphere’s warming, and these two phenomena will continue for the next six months until the summer solstice in June similarly heralds a return to winter. Of course, the opposite of these are true in the Southern Hemisphere: today is their longest day of the year.

It is curious to me that the first day of winter is also the first day of winter’s expiration, its demise. One would think winter’s opening day would portend more of the same with nothing to contradict it, nothing but cold, dark barrenness, bleakness, or as the poet says, earth standing “…cold as iron, water like a stone.” We don’t call it the ‘dead of winter’ for nothing.

But there it is, the illogical and illuminating contradiction: light. Its return mocks winter, scoffs at the cold, derides the bleakness. Each day that follows, the sun rises just a little earlier and sets just a little later. Winter anticipates spring, death foresees life, dark predestines light, cold envisages warmth: these are the paradoxes of the seasonal change we call the winter solstice.

So it is no coincidence that the early church chose to recognize the solstice as the most appropriate time to celebrate the birth of Christ. Now, in actual fact, Jesus’ birth likely took place some time during what we call October. I am not certain how that is surmised, but it has something to do with the timing of Jewish festivals and the typical season a census would have been called by Rome (see Luke 2:1-4), not likely the dead of winter.

But no. Indian Summer, beautiful as it is, just won’t do. To celebrate something as significant as the incarnation a time is needed that makes a statement, a time that belies its context, that refutes the cold, that calls out the stony spiritual stupor right in the midst of its bleak midwinter and long underwear. Solstice. Now there is an appropriate time to celebrate the Light of the world.

To celebrate something as significant as the incarnation, a
time is needed that makes a statement, a time that
belies its context, that refutes the cold, that calls
out the stony spiritual stupor right in the midst
of its bleak midwinter and long underwear.

And so we do. We know there is no life without light. Light begets being, a commonly known biological fact. 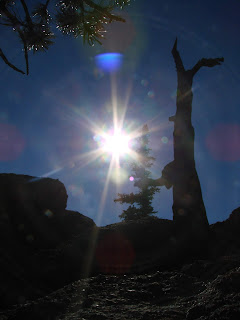 The same is true in the spirit world. St. John the Evangelist puts it this way: In him (Jesus) was life, and that life was the light for humanity. The light shines in the darkness, but the darkness has not overcome it (John 1:4-5). Or later, sharing the very words of Jesus himself, he writes, And Jesus spoke to them saying, “I am the light of the world; he who follows me will not walk in darkness, but will have the light of life (John 8:12).” Or take it all the way back to the prophet hundreds of years before Christ. Anticipating the coming Messiah, Isaiah foretold: The people walking in darkness have seen a great light; on those living in the land of the shadow of death, a light has dawned (Isaiah 9:2).

Light dispels darkness, not the other way 'round. Open a door into a dark closet and what happens? Does the darkness come creeping into the room in which you stand? No the opposite holds, and always will. Light outmaneuvers darkness.

So, solstice is here. I look forward to it not only because of Christmas but because it heralds the return of summer. Celebrate the light with me. Proclaim the truth of the Christmas carol:

Light and life to all he brings,
Ris'n with healing in His wings.

That's from Hark the Herald Angels Sing, by Charles Wesley, written in 1739. Or, if you prefer, fast forward to Bing Crosby (1963):

The Child, the child, sleeping in the night,
He will bring us goodness and light.

Let there be Light!
~~ RGM, From an
Earlier Blog Entry
Posted by Rick Mylander at 6:57 AM