From My Nature Journal: Drama in the Woods?

Am up in the Northwoods for a short solitude retreat. There is quite a lot to think and pray through these crazy days, so, though the thought came up rather spontaneously, the decision has been a good one. Holing up at our little Upper Peninsula cabin, already closed for the winter, I’m hauling water indoors for utility, cleaning and cooking and hauling my body outdoors to use the outdoor plumbing, AKA our old ramshackle outhouse. Frankly, I’m glad the old thing is still there for such a time as this.

Winter is still officially more than a month away, but one would hardly know it by looking outside. Yesterday brought blizzard conditions with several inches of snow and winds gusting over forty miles per hour. Temps are bottoming out overnight in the mid-teens and the lake is starting to freeze at its sheltered edges. But the little place is cozy and warm, and I feel blessed in a thousand ways.

With the fresh snow on the ground, I took a detour from my daily outdoor walking circuit and cut into the woods on a slender four-wheeler trail, the snow of which had not been disturbed, not by humans at least, just to see what I could see. Am not here very often with new snow on the ground, and my friend Ed has told me of the delights of identifying animal tracks in fresh snow. I was not disappointed, far from it. 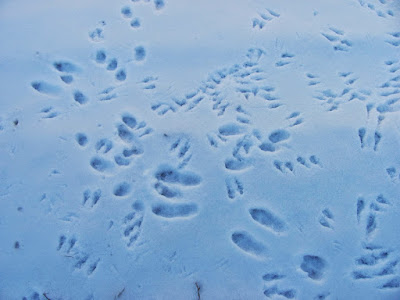 I was first simply stunned by the amount of tracks there were to see, and all since the snow
stopped falling just last evening. These woods have been a busy place. There had been field mice and red squirrels. Fox tracks crisscrossed everywhere, following rabbit tracks that multiplied like, well, rabbits. Deer tracks were ubiquitous, large and small, then something I could only guess had been a porcupine. Several times I saw tracks of what might have been a small weasel or ermine. There was even a pile of bear scat in the middle of the trail as big as a dinner plate, but it must have been set down before the snow as there were no tracks nearby. Though I couldn’t be certain, it looked like a lone wolf had coursed through, but the paw prints were so blown over that it was hard to tell. The coolest track I came across was some kind of bird – Owl? Hawk? – that had hit the ground to snatch something and left its full wing imprints in the snow. Sure enough, I did a little checking and found from the right a set of rabbit tracks that met an abrupt ending, certainly that little creature’s ‘end of the trail.’

It was easy for me to imagine the drama that plays out right under our noses every single night and day in the woods. Just to find food amidst a harsh northern Michigan winter must be an incredible feat. But drama? I guess not. To truly call it drama would be to anthropomorphize it, because for animals, it is not drama at all, just the normal way of life. It only seems dramatic from my perspective.

I am a steward of God’s creation, as are you, but I take joy knowing that God tends to the animals, who seem so very vulnerable to me:

Look at the birds of the air. They neither sow nor reap nor gather into barns, and yet your heavenly Father feeds them. (Matthew 6:26).

Are not five sparrows sold for two pennies? And not one of them is forgotten before God. (Luke 12:6)

So since I find myself thinking today with an animal mind, I’m remembering a poem I saved long ago, and if I’m correct, I think it’s from a book of blessings by John O’Donahue called To Bless the Space Between Us. It had this piece in it, entitled “In Praise of Animal Being.”

Nearer to the earth’s heart,

Deeper within its silence:

In a way we never will.

We who are ever

By the parade of bright

Is not fractured thus.

To be where we are:

Whereas they are always

The here and now.

May we learn to return

And rest in the beauty

And with freed senses

Into lightness of spirit,

And slip frequently into

The feel of the wild.

Of our animal being

May we learn to walk

With all their confidence

So that our minds

[*The parentheses are mine. I couldn’t resist.]

Posted by Rick Mylander at 5:01 PM