From My Nature Journal: Holy Ground

I’ve heard it said that one’s time on earth is filled with glory when one can look at everything as if they were seeing it for the very first time or the very last. Thus is a naturalist’s life filled with joy, but I think the same might be true for anyone who lives by this philosophy. 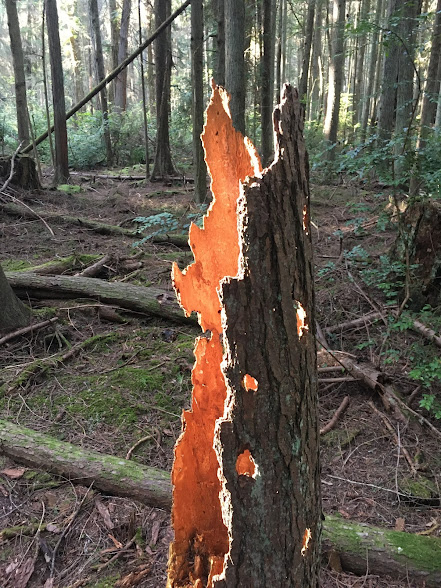 Gail and I were walking late one May evening just before sunset in rural Coupeville’s Rhododendron Park, a little-known, county-owned gem with towering Douglas firs and enormous coastal rhododendrons, some twenty and thirty feet tall as they stretch up and out for pockets of sunlight beneath the dense conifer canopy. The park has been one of our favorite mid-spring walks, being as it is just chock full of Washington’s ‘rhodie’ state flower.

Our attention was caught by what at a distance appeared to be a stump on fire, and it resolved itself as we approached into a hollow trunk remnant just coincidently catching the very last of a direct sun ray from the west, standing out in the forest darkness. It became for us almost a literal ‘burning bush,’ a gift of God’s grace, and provided yet another reminder that all of God’s masterful creation is holy ground.

…One’s time on earth is filled with glory when one

can look at everything as if they were  seeing

…There the angel of the LORD appeared to Moses in a blazing fire from the middle of a bush. Moses stared in amazement. Though the bush was engulfed in flames, it didn’t burn up. “This is amazing,” Moses said to himself. “Why isn’t that bush burning up? I must go see it.” When the LORD saw Moses coming to take a closer look, God called to him from the middle of the bush, “Moses! Moses!” “Here I am!” Moses replied. “Do not come any closer,” the LORD warned. “Take off your sandals, for you are standing on holy ground. I am the God of your fathers —the God of Abraham, the God of Isaac, and the God of Jacob.” When Moses heard this, he covered his face because he was afraid to look at God. (Exodus 3:2-6)

Posted by Rick Mylander at 5:58 PM