From My Nature Journal: Everything I Need to Know I Learned From a Nursery Stump 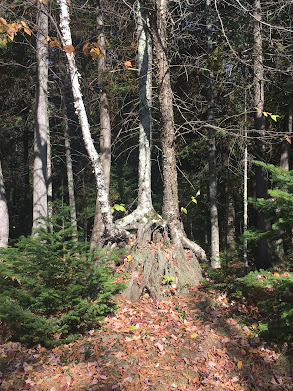 Well, not everything. But, with a head nod to Robert Fulghum, there is sure a lot about the Christian life one can learn from a nursery stump.

First off, you may ask, “What’s a nursery stump?” It’s the stump left after a tree is either cut down, or breaks and falls naturally due to wind or age. Over ensuing years, that cleanly cut or jagged stump softens and begins to rot, holding moisture nicely even in drought, providing a near perfect medium for windblown tree, shrub and herb seeds to take root and thrive. What can often happen is that a tree seedlings’ roots can spread through or over the stump and down to the actual ground, and as the stump itself rots away over the decades, a strange impression can result that the remaining newer tree (or trees) has legs or stilts, as if the tree has jumped several feet off the ground and frozen in that position.

Of course, there are also nursery logs, as the downed trunks of trees, some a 75 feet or more in length, can also offer such a medium, but more rarely, as they’re not as welcoming to seeds as a stump. Water runs off the log, and its bark takes much more time to soften. Still, one can sometimes in a natural forest spot several young or medium-aged trees that seem to have been planted in a row straight as an arrow. Such is the effect demonstrated by a nursery log.

But I have always loved coming across a good nursery stump. Above is one of my younger favorites, perhaps fifty yards north of our little Michigan cabin’s driveway in the midst of the Ottawa National Forest. My guess is that the stump is remnant of the majestic and numberless white pines that used to fill these woods before the heady Upper Peninsula logging days of the late 1800’s and early 1900’s, the lumber from which built Chicago and other great cities of the northern states. But note not only that three different trees have taken nourishment and root from it, but also that these three are of three separate species – in this case, paper birch, yellow birch and black spruce – a curious and beautiful diversity. 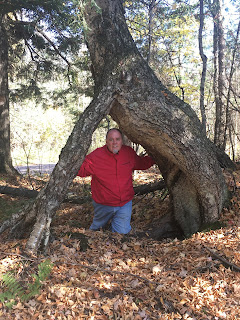 Here is an example of a ‘tree that jumped out of the ground’ as mentioned above, an aging
yellow birch the nursery stump of which is long gone. As you can see, it is probably four feet off the ground.

One of the most striking nursery stumps I ever saw I noted years ago close along the south side of U.S. Highway 2 as we drove between Seattle and Wenatchee. West of the Cascade divide, it was enormous, 12 feet or more in diameter and eight feet high, likely a Douglas Fir logged out years earlier, with another large tree growing from its top. Every time I’ve driven that highway since I have watched for it to get a photo, but have yet to come across it again. It’s possible it was removed as a hazard by the highway department, but I doubt it. It perhaps is/was a landmark beloved of many. 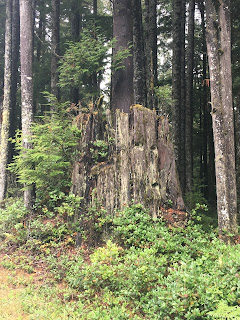 This one shown here is not quite as large, about ten feet in diameter and eight feet high, one I just saw last week while driving with some friends on Washington’s Olympic Peninsula along U.S. 101. Yup, that’s another large fir, about fourteen inches in diameter, growing out of its top. Note the straight cut along the top of the stump; that is remnant of the two-man (likely men!) handsaw that took the tree down. You can also see the hole marks on the right side where the loggers wedged a board to stand on to cut it at that height, typical of the process with such large trees.

And below is another not far from our Coupeville home on WA State Hwy 525, a photo taken yesterday in the rain. The four-foot-diameter stump is also likely an old Doug Fir, logged many years ago; note again the straight cut, a bit less obvious. But what a great proliferation of roots coming down the decaying trunk from a Western Hemlock growing atop! This one will really be a curiosity once the whole stump is decayed. I’m glad it is in clear view from the road, very worth a drive-by. 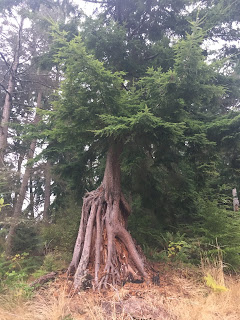 Plain and simple, nursery stumps and logs are not only a beautiful curiosity, but give of
themselves for the nourishment and betterment of something else, a medium for another’s growth and flourishing. Now, of course, it might be easy to anthropomorphize here (though it’s not absolutely impossible, you know, that creation has some rudimentary awareness of its Creator – God could do that), but this is not the point. The point is that the follower of God exists to act ‘for God’s glory and neighbors’ good,’ a phrase from the history of my denominational tribe, the Evangelical Covenant Church. God’s glory and neighbors’ good. It’s a great foundation for living whether one is a church-goer or not. Nursery stumps do both, beautiful to God’s glory and existing for the blessing of others. So could all God’s children be.

Imagine Jesus saying, “You are the nursery stump of the world…” I like that.