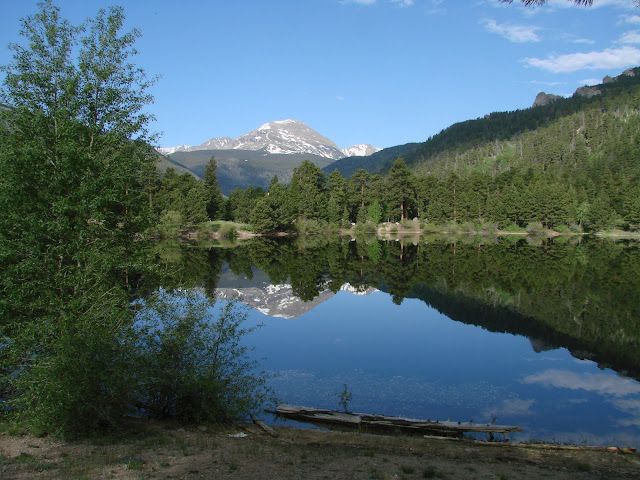 A week or two ago we posted a new cover photo on our Facebook page, and since several have asked about its location, I thought I might highlight it as this month’s POTM on my blog. I took it on a beautiful June day a couple years back. Before I share its whereabouts, though, I wonder if any of my Colorado friends recognize it… One big clue: RMNP.


By default, Facebook always crops photos people use as their cover so that they will fit their masthead. What that has done to my FB photo is make it seem panoramic, which also ends up emphasizing its mirror image. One friend even told me she looked at it upside down to see if she could tell the difference of which side was up! But as you can see from the complete snapshot above, the broader view opens up the mirror effect somewhat. Click the photo for a larger image.

There is something quite lovely about mirror images in water. Gail and I have loved finding locations for them, on certain trips getting up in predawn hours just to be able to catch them at sunrise over still surfaces, even over beaver ponds. Interestingly, reflection sometimes changes a landscape’s color, or the very image itself, by reflecting wavelengths differently than the way our eyes see them. For example, we have photos that reflect clouds in water very differently than how we see them directly with our eyes, reflecting some we cannot even see! This photo is pretty accurate – the differences you see in the lake’s foreground are actually underwater rocks.

OK, this one’s location? It didn’t even require a hike, one of those amazing photos that can almost be taken from a car window (though we didn’t)! Rocky Mountain National Park has four entry stations on its east side that are staffed by rangers at an entry booth.  The southernmost of these is the Wild Basin entrance off Highway 7, north of Allenspark, which leads to some of our favorite places to hike. Just inside the kiosk you will find this beautiful little tarn, Copeland Lake, adjacent to Copeland Moraine to its north (at right in the photo); I believe the mountain the lake reflects is Copeland Mountain. (If someone knows differently, correct me if I am wrong!)

Copeland Mountain is one of many ‘thirteeners’ in Rocky, and one of, believe it or not, over 600 in Colorado. A thirteener, for you lowlanders, is a mountain 13,000 feet or higher. Copeland is 13,167 feet, advancing well above treeline, which is about 11,500 feet at this latitude. But the crazy thing about Colorado is that it contains 54 of our nation’s 87 fourteeners, or 62%, and 637 of its 884 thirteeners, a whopping 72%! Alaska, of course, has the nation’s highest peaks, in fact the nation’s eleven highest, topping out at McKinley/Denali’s 20,328. California has the highest in the Lower 48, Mt. Whitney in the Sierras at 14,505. But it’s just the raw number of high peaks here that makes the place so amazing, and it is no wonder that one of the state’s nicknames is “The Highest State.” It has by far the highest average statewide elevation (about 6800 feet), as well as the highest low point (3,317 feet). So, contrary to what you might first think, the nickname has nothing to do with the legalization of a certain green herb here last year, nor of the fact that one of our official state songs is Rocky Mountain High by John Denver!

Many people here make it a goal to climb all the fourteeners, and some even all the thirteeners! We have only climbed one of these so far, Mt. Bierstadt at 14,065 feet, the photography of which I featured in last week’s blog.

Anyway, one of the things we love about this place is Rocky Mountain National Park, a must see if you visit Colorado. It never ceases to inspire us. Come, and we’ll be glad to take you there!

P.S. And in the "Useless Piece of Information" category, did you know that of the 637 thirteeners in Colorado, five of them are named Grizzly Peak? Not only does that show an embarrassing lack of creativity among namers, but there aren't even any grizzlies IN Colorado...
Posted by Rick Mylander at 10:54 PM