(*Photos of the Month)

OK, I decided a photo of the month would be timely for my first blog of June, breaking from the norm of sharing from my nature journal as my first entry of the new month. This is simply because we just took these images these last several days, and I’d like to get them up in context! So let me give a bit of that context before I share the photos.

Gail and I are away from Colorado right now, enjoying an early spring (after a very long winter) in the Northwoods of Michigan’s Upper Peninsula. Early spring? In June? I explain. Though we have often been here by Memorial Day weekend, this winter was unusual here, with cold temps and late, heavy snows well into the first six weeks of spring. Take this for example: last year in 2012, ice-out on our lake took place the first week of March; this year it didn’t go out until May 8, a record in anyone’s memory. That is crazy! And to make matters worse, the depth of that late snow and the resulting delay of the frost going out has produced an unusually high water table, extending what is known here as ‘mud season’ by several weeks. Our driveway is impassable, creeks and lakes are high, some gravel roads are still closed having been washed out with freshets, and water is running in the woods in places we have never seen it run before.

Another thing it has done, however, to our great delight, is delay the first blooms of the season until late May; as a result, we are seeing flowers we have never had the pleasure of seeing here before either. Typically, early blooms come to flower before tree leaf-out blocks direct sunlight to the forest floor.  Some of these early bloomers are called ‘ephemerals,’ blooms that may last as short as a single day. Among them are some shown below. Thankfully, though a patch of them might be ‘here today and gone tomorrow,’ varying ground conditions (shadows, moisture, rocks, incline, etc.) may allow another patch to pop out in another place the next day, or the next. So it has been fun to walk or drive up and down the road, or walk in the woods each day, and see unusual and short-lived blooms along the way. Most early season flowers are white or mostly white.

The word is from the Greek ephemeron,
which means liable to be cut short,
a good word for a bloom that
might only last a few hours.

Ephemerals, as it relates to flowers, was a new descriptor to us. We found it in several places as we looked up these unknown blooms in our field guides. The word is from the Greek ephemeron, which means liable to be cut short, a good word for a bloom that might only last a few hours. Then I thought that Greek word even sounded familiar, and sure enough, it is from the same root as the common Biblical word daily. If I remember correctly, it is the word that we use in the Lord’s Prayer when we pray, “Give us this day our daily bread.” I think it is also the word used in the Septuagint (an early Greek translation of the Hebrew Old Testament) in Exodus 16, when the Israelites are told to gather manna sufficient only for the day, in other words, to trust God that God will daily provide for them again the next day. Thinking about and meditating on this Biblical word has added a lovely meaning and deeper appreciation to our early spring flower-gazing and identification.

Here are the photos... 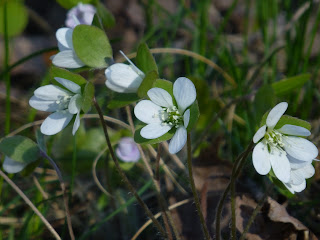 Hepatica – ¾-inch single blooms. A true ephemeral, it can be pale blue, lavender, pink or white. Also called liverleaf for its liver-shaped basal (lowest) leaf, early herbalists assumed it must then be good for liver ailments – it wasn’t. 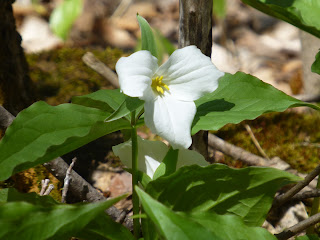 Trillium – 2-3 inch tri-petaled blooms, with a three-lobed leaf and three-sectioned sepals. It is no wonder it is called trillium. It is also a protected species, one of our favorites, and the white flowers turn light pink with age; seeds are eventually disbursed by ants who carry them underground. 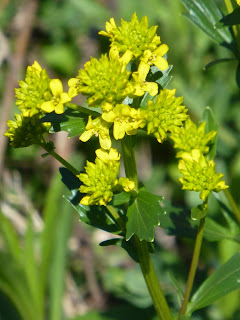 Wintercress – ¼-inch blooms in bunches, one of the first plants to green in the spring, even while snow is on the ground, thus its name. The leaves are often the first green food of the season for hungry deer. 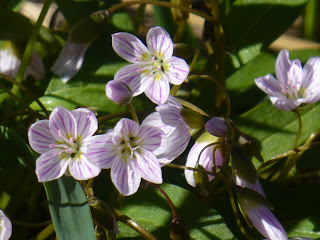 Spring Beauties – ½-inch single blooms, can be white or pink, with pink veins that guide small insects to the nectar spot. Sometimes producing a veritable carpet of blooms, we have also seen these in the spring on the tops of mountains in Colorado. 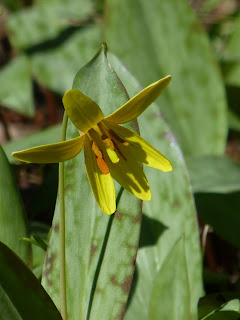 Trout Lily – 1 inch single blooms, takes up to seven years to mature to flower; can also be white. It is also called adder’s tongue, with both flower and leaf disappearing by early summer. 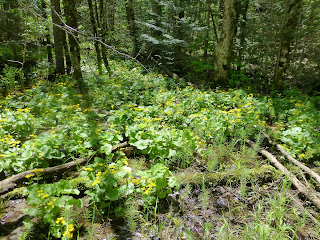 Marsh Marigolds – 1½ inch blooms, not a marigold at all but in the buttercup family. The showiest and longest-lasting of the early risers, it is also known as cowslip, as cows would slip on them when coming down to the water in early spring. 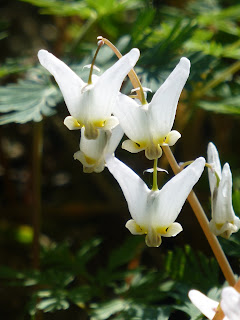 Dutchman’s Breeches – 1 inch blooms, one to four on a stalk, another true ephemeral. Certainly the winner in the ‘coolest name category,’ its flowers resemble, upside-down, the pants worn in the Netherlands in earlier times. It is a favorite of spring bees due to its ample nectar. 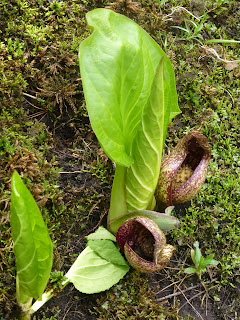 Skunk Cabbage – tiny flowers on a one-inch pineapple-shaped spike, wrapped in a strange floral sheath, with leaves eventually up to a yard wide. Coming in a close second in the ‘coolest name category,’ it soundly beats all comers in the ‘weird category.’ This ephemeral produces so much heat that, if it has to, it thaws the ground and melts the snow in a circle around it as it pushes up from the ground. As its name implies, it stinks.

And speaking of ephemerals:

As for man, his days are like grass.
he flourishes like a flower of the field,
for the wind passes over it, and it is gone,
and its place knows it no more.
But the steadfast love of the Lord is from everlasting to everlasting upon those who fear him,
And his righteousness to children’s children,
To those who keep his covenant
And remember to do his commandments. (Psalm 103:15-18)

Consider the lilies of the field, how they grow; they neither toil nor spin. Yet I tell you, even Solomon in all his glory was not arrayed like one of these. But if God so clothes the grass of the field… will he not much more clothe you…? Therefore, do not be anxious… (Matthew 6:28-31, portions)

The grass withers, the flower fades,
but the word of our God will stand forever. (Isaiah 40:8)

May you be completely assured today of the blessing of God’s daily care.

P.S. Up next week? Back to my nature journal…
Posted by Rick Mylander at 11:14 AM