For so our Lord was pleas-ed when
He fishers made fishers of men.
The first men that our Savior dear
Did choose to wait upon Him here
Blessed fishers were, and fish the last
Food was that He on earth repast.
I therefore strive to follow those
Whom He to follow Him hath chose. 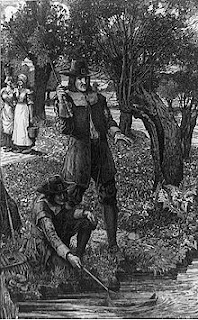 No, Isaak Walton was not a great-grandpa of John Boy, but a 17th Century English writer-naturalist who lived from 1593-1683. This quote is from his iconic The Compleat Angler, first published in 1653, among the oldest books I have read, and unless I am forgetting, the oldest I have read on a natural history subject.

First of all, let’s get our language right. Compleat is not to be confused with complete, though there are similarities. Compleat is an obsolete word meaning ‘skilled, highly proficient or quintessential,’ as compared to complete, which means ‘possessing all the necessary parts.’ Frankly, most fishermen never have the latter at any given moment, though they still may be considered compleat! And angler has nothing to do with geometry or bargaining. As fisherpeople know, it is what we are called while we try to ‘get an angle’ on that slippery, wily critter beneath the waves, to figure him out, to think like he thinks. In no other sport, recreation or game activity that I know of is someone
called an angler. It is, after all, why the sport is called fishing, not catching.

The Compleat Angler is a delightful little read that is fifty percent fishing, fifty percent philosophy of living, and one hundred percent a rollicking frolic through songs, poems, quotes, anecdotes and the happy joie de vivre of a man who spent the last several decades of his long life streamside with a bait can and a friend or two, often clergymen. I think I would have really liked this guy. Hear Walton’s advice about the little creature in the can that is going to help him accomplish his goal: of the frog he says, “Use him as though you love him, that is, harm him as little as you may possibly, that he may live the longer.” And so in the quote above, Walton seems to sum up his love for angling this way, that if fishing was good enough for Jesus, it must be good for us as well.

P.S. Next up next time -- my Blowin’ in the Wind feature, a poem I think you’ll really like…
Posted by Rick Mylander at 8:40 PM