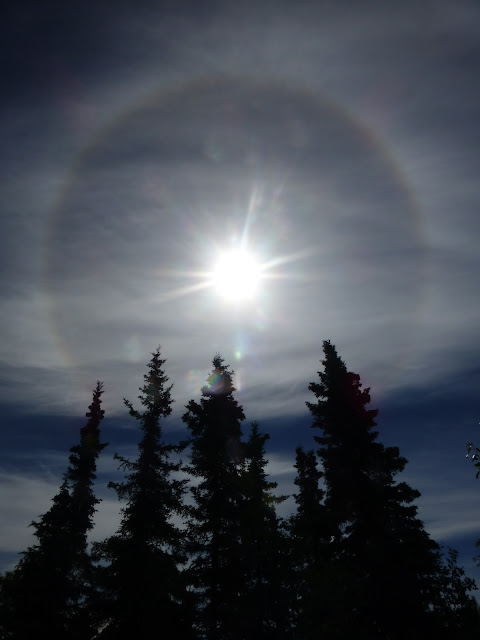 They are surprising little beauties with many names. I have always called them sun haloes, though the phenomenon is also known as an icebow, nimbus, aureole and gloriole. Interestingly, the latter two words are also the specific religious terms for the halo depicted in artwork surrounding the head of a saint, something I never knew before now. (I wish now that I had positioned my dear Gail with the bow around her silhouette, to me appropriate!) This photograph was taken last Sunday while camping in Kenai, Alaska, during our delightful visit with daughter Kate and son-in-law Phil’s family. I snapped it above a small grove of Sitka spruce, shortly after noon on a day that clocked nearly eighteen hours between sunrise and sunset.


Not exceedingly rare, optical haloes are still unique enough, often holding their place in the sky around the sun or moon with little notice. They are sometimes referred to more specifically as twenty-two degree haloes, the circle’s distance from the sun or moon, to differentiate them from other sky phenomena containing spectral color. Of course the most common is the rainbow. Who can keep their eyes off of one of those when it displays its morning or evening glory? Another fairly common one is the sundog, or parhelion, something people in northern latitudes can see with regularity – little snatches of rainbow color on one or both horizontal sides of the sun, also twenty-two degrees away. One of my other favorites, though devoid of color, is the sun pillar. All are caused by various kinds of reflection or refraction through water droplets or ice crystals in the upper atmosphere or lower sky.

The ancients and those in the Middle Ages considered sundogs and haloes as predictors of portentous events. One Swedish king almost had his two rivals slain over the appearance of sundogs, also called mock suns, insisting it was a divine revelation to him of their conspiracy to usurp his role as the supreme sun/ruler. Ah, ego…

What a sundog or halo can portend is rain, though not necessarily. The old weather phrase said, “Ring around the moon, rain coming soon.” And since these phenomena appear as the result of ice crystals in high altitude cirrus clouds, which can be the leading edge of an oncoming rainy weather system, rain does not necessarily follow every time.

For me, the only things that spectral color in the sky portends for sure are the promises of God. In other words, whenever I see rainbows or their kin I cannot help but think of God’s faithfulness. The rainbow is held in Judeo-Christian culture as a symbol of God’s fidelity to his followers, based upon the story of Noah and the flood:

I hope you enjoy the photo. And I pray you will also be constantly aware of the faithfulness of God.