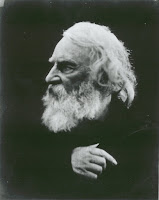 Over the pallid sea and the
silvery mist of the meadows,
Silently one by one, in the
infinite meadows of heaven,
Blossomed the lovely stars,
the forget-me-nots of the angels.

OK, I know I did a quote from Longfellow a short time back, but looking up at the summer night skies these days I could not resist posting another. I had actually intended to share it last month when I did the selection from my nature journal entitled “Enhanced Night Vision,” a piece on stargazing and other kinds of seeing, but I forgot. Click the title to check it out if you missed it.

Longfellow, you may recall, was a 19th Century American poet (1807-1882), a card-carrying romantic, his work replete with emotive phrases calling out the beauty of God’s creation. These particular lines are from the third chapter, Part 1, of his epic poem Evangeline, A Tale of Acadie. It is a beautiful quote within a beautiful piece, the story of a betrothed young woman and man separated from each other during the British deportation of early French settlers from the Canadian Maritimes in the mid-1700’s. The entire work is available for free from Amazon or Gutenberg, to be enjoyed by other hopeless romantics like me. 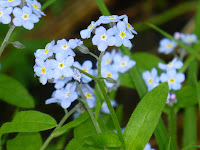 Many a time have I sat before the developing night sky watching stars appear thusly. Longfellow’s reference to them as ‘the forget-me-nots of the angels’ is a lovely thought, as Gail and I have also enjoyed countless times photographing these delightful little blue flowers in early spring. I had not considered the resemblance before reading the lines, but now cannot forget it.