From My Nature Journal: The Lesson of the Pancakes

I parked on the frontage road that paralleled the beach and scrambled down a fifteen foot pile of concrete riprap. On my way to catch a flight in Los Angeles, I found myself with a couple extra hours, so thought this spot on the ocean near Ventura a good place for some reading and prayer.  With the beach spread out like a blanket before me and waves breaking thirty yards away, I sat in the sand that cool November morning, leaned back against a sun-warmed chunk of cement, took off my shoes, and cracked open the little book. 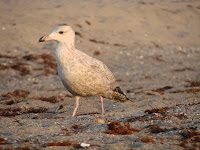 It had been a long time that Henri Nouwen’s The Way of the Heart had sat on my shelf, though I had been looking forward to picking it up just as long. On my way out my office door several days earlier, I scanned my ‘to read’ pile for just a little tome to fit in an overfull briefcase, and it was an easy addition. It’s a brief book about desert spirituality, including the spiritual discipline of solitude, a commodity in short supply in my life. I had just read that one of the cardinal sins a person in solitude will struggle with is the sin of greed. Solitude is a kind of fast, and whenever we fast we are made starkly aware of the props we miss, the little luxuries we wish were available, and we come to realize how dependent we are on superfluous stuff. Solitude can bring us to that place of conversion where we can see how much our self worth has depended on what we have acquired, let this old greedy self die, and allow the new generous self to be born. But first we need solitude. The thing is, when we get there, we think we are alone. But suddenly this visitor named Greed comes pounding at the door. The task, Nouwen says, is to stay in solitude long enough that this unwelcome caller gets tired of knocking, goes away, and leaves us alone. 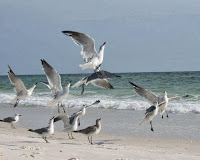 I sat there reading, resting, thinking, praying, the surf drowning out all sounds except the calls of gulls. I shut my eyes and lay my head back on the rock. All of a sudden there was the startling cacophonous sound of seagulls surrounding me and I opened my eyes with a start. Not ten feet away a dozen or so were fighting over some round object on the beach, scores more coming in overhead, screaming incessantly. Suddenly another dozen were struggling over another round, brown object just to the right of the first melee. Something whizzed past over my head from behind up above the riprap. Before I knew it more and more seagulls -- many species, large and small, young and old, several hundred --
were converging around me from all points. It felt like a Hitchcock movie.

Before I knew it, more and more seagulls --
many species, large and small,
young and old, several hundred --
were converging around me from all points.
It felt like a Hitchcock movie.

Behind me, from the parking area above the concrete, someone was pitching pancakes out onto the beach, gliding through the air like frisbees, to be met by the squabbling, screaming, pecking birds. Ten, twenty, thirty pancakes came sailing over my head, launched by persons unaware I was on the beach below. One bird would finally get hold of the tasty disc amidst the riot, fly away, and get only a few feet before the pancake would break and fall out of its beak, creating another mad dash of juking, feinting and grabbing on land and sea. I was mesmerized. The whole experience lasted about five minutes, whereupon I heard a motor start and a camper pull away.

Though I am unashamedly anthropomorphizing, I had a stark picture of what greed must look like to God, a parable asserting itself. One wants what another has, convinces himself that he needs it, and by aggression or subterfuge seeks to get it, only to lose it to another, and on and on it goes. The story was playing before me in real time and I prayed, “Lord, let me hold this image as I consider the effects of greed on my own spirit." 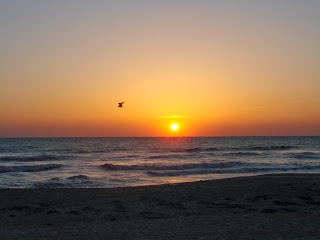 The beach became quiet again. Most of the birds were flying off but several dozen remained, standing quietly in the sand, perhaps licking their wounds (though they have no tongues), perhaps interiorly celebrating the pancake they got or bemoaning the one that got away. Then I remembered: at some point during the commotion something had landed quite close to me, not two feet away, hidden from my sight by a log. Had it just been a bird landing quickly, or was there one last pancake on the beach? I soon had my answer, for some of the birds standing nearest began to move toward me. One brave bird at a time would inch my way, look down at the spot, look up at me again, and look down again, take a hesitating step, two steps forward, one step back, but always forward, looking me in the eye as if to say, “You have what I want.” Several got within three feet, then took off, giving up. The birds were so close, their eyes so sharp in seeming to search mine, it was almost like I could see into their greedy little wills (ok, admitted anthropomorphism again). Finally, one advanced close enough to leap forward, snatch the last pancake and take flight, others lifting, chasing, crying from behind.

I had my picture, though, and I have not forgotten it: my loving, benevolent, gift-giving heavenly Lord, looking into my eyes, and sadly seeing the greed therein.


Lord, teach me the lesson of the pancakes.