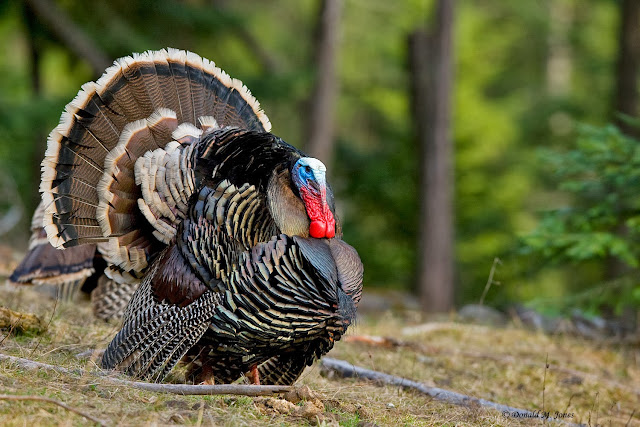 The national bird? At least that’s what Benjamin Franklin would have preferred, according to a letter to his daughter in 1784! Old Ben never had a chance to publicly advocate for it, though, as the bald eagle as a national symbol had grown in popularity while he was away in Paris serving as envoy to France. Certainly at Thanksgiving, however, it IS the national bird, with forty-five million of them eaten over the holiday – fully one sixth of all turkeys consumed annually in the U.S. 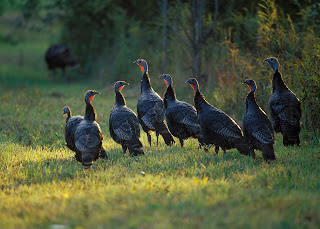 It’s an incredibly beautiful bird in the wild, though, is it not? And it has multiplied prolifically in recent decades. In fact, wild turkeys are the poster chicks of conservation success: nearly extirpated in North America in the early 1900’s, down to the last thirty thousand individuals, they have now rebounded to a population of well over seven million, thriving in all forty-eight of the contiguous states (though, according to a recent article in Audubon Magazine, there may be some challenges on the horizon, especially in the southeast). Gail and I have come across these amazingly adaptable creatures while hiking in both Michigan’s Northwoods and Colorado’s
Rockies, and while car touring in Florida and 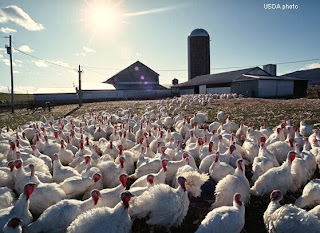 Washington. My father-in-law in Roscoe IL even draws flocks of them in regularly, just outside his living room window, by putting out corn. And though they bear little resemblance to the domesticated variety shown in the USDA photo, it is said that a breeding domestic pair, totally white, will have its offspring return to their full-color plumage within seven short generations. Still, I am grateful for turkey farms; my mouth is watering just thinking about Thanksgiving Day and the days of leftovers to follow! 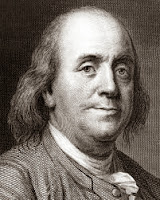 OK, back to founding father Franklin… Here is what he had to say about the turkey vs. eagle national symbol debate! Of the eagle, he said, “…he is a bird of bad moral character, he does not get his living honestly [stealing from other birds or eating carrion]… Besides, he is a rank coward: the little kingbird, not bigger than a sparrow, attacks him boldly and drives him out of the district.” But of the more noble turkey, he wrote, “…it is a much more respectable bird, and withal a true original native of America… a bird of courage that would not hesitate to attack a grenadier of the British guards who should presume to invade his barnyard…”

Just think. If Franklin had gotten his way, we might today be calling an imbecilic person an eagle rather than a turkey, might celebrate a fantastic holing out on a golf course as a turkey rather than an eagle, might even have heard these famous words from the moon back in the late 60’s, “Houston…? The Turkey has landed.”

Finally, I suppose a turkey, cooked or uncooked, could serve as a suitable symbol for Thanksgiving. Anything that can help us call gratitude to mind would be a very good thing.

I will give thanks to you, Lord, with my whole heart. I will tell of your wonderful deeds. (Psalm 9:1)

P.S. The quiz? Male turkeys are called toms, and females, hens. Baby turkeys are called poults. And, though there is some debate, a group of turkeys is called a rafter, flock or gang. Yes, they fly, up to fifty-five miles per hour! And they do indeed roost in trees, which may be why a group of them is called a rafter. Lastly, my friend, Farmer Johnson in northwest Iowa, raises 45-50 pound birds that can do a person some serious damage if they wanted to!