In our home, my dear and otherwise good wife doesn’t allow Christmas music to be played until the day after Thanksgiving, says she wants to keep it special and not get tired of it before Christmas rolls around. Never mind that we might not be home long enough during Advent to listen to Handel’s Messiah all the way through. Me? I’d play it all year ‘round if I had my druthers, at least from our own recordings, as the only thing I tire of are the cheesy tunes the radio tries to pass off as Christmas music.

So here it is the day after Thanksgiving and I’ve already kicked off the morning with Messiah Part 1 Scene 1 and Mannheim Steamroller. It has put me into enough of the holiday spirit that I decided it was time to share as my photo of the month a couple seasonally-fitting images I took while hiking in Florida earlier this year.

I was simply checking out the plants among the dunes at Hobe Sound National Wildlife Refuge, on the east coast north of Palm Beach, and what should I come across but a small, wild poinsettia! It bore little resemblance to the cultivated variety used everywhere in
seasonal displays, what with their enormous red bracts and all, so I didn’t make the connection at first. But soon the light went on and I let out an, “Oh wow, look what’s here!” Though the close-ups below make them look larger than they were, the bracts were actually very small, perhaps a half-inch in length. So it was its unique leaf that clinched the recognition. 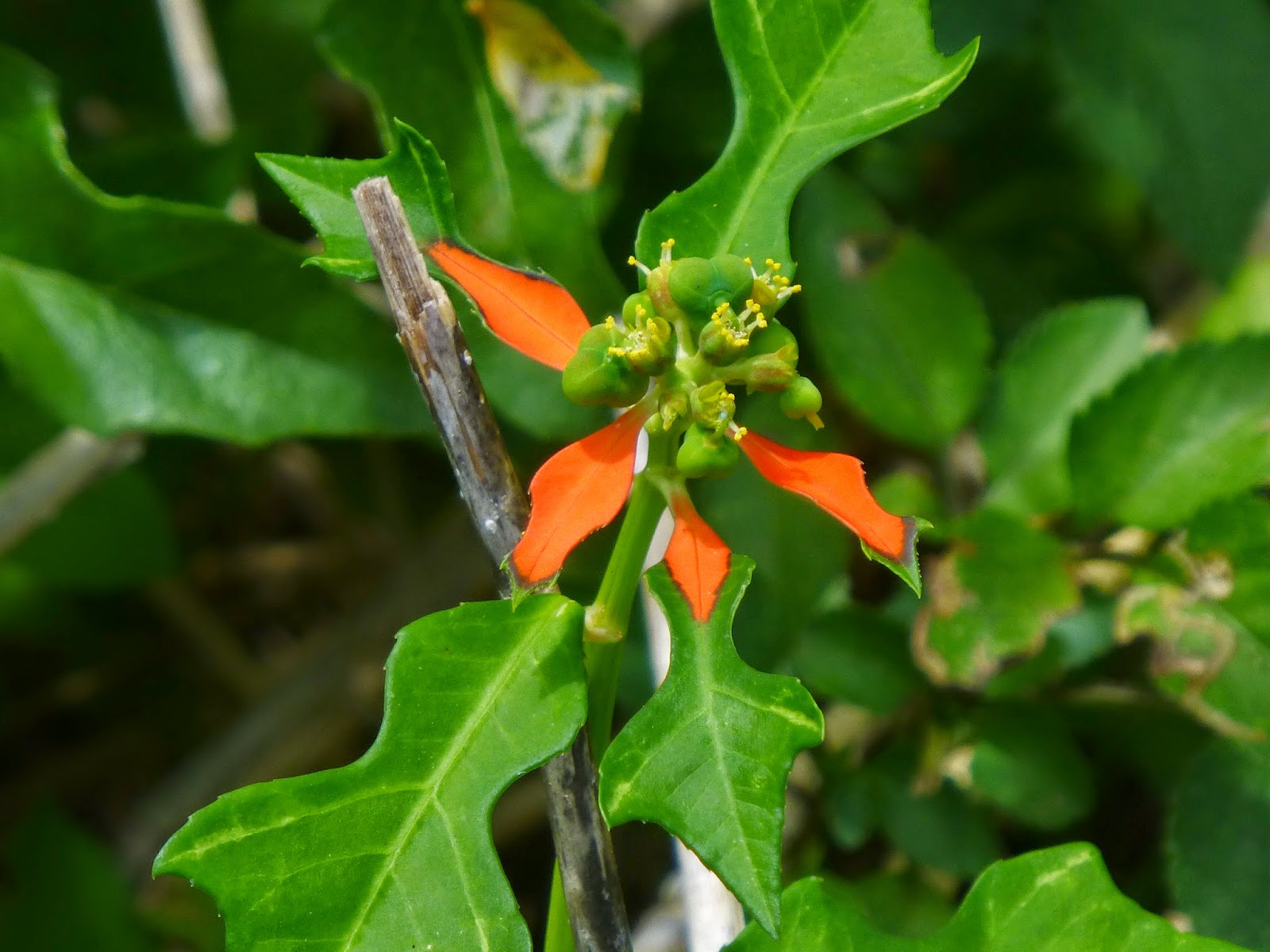 Only in researching them now do I find that the red bracts are always small like this in uncultivated form – it’s only a manipulated, grafted variety that gets large and showy. Poinsettias are native to Mexico and Central America, and grow in the wild into shrubs or small trees. This particular plant or its seeds may have come in as a cutting on some storm, blown ashore with other jetsam. The typically red ‘blooms,’ as you may know, are not the flower petals at all; the flowers are the tiny, tiny yellow blooms that barely catch our attention. And concern that the plant is poisonous? It actually only has very mild toxicity. 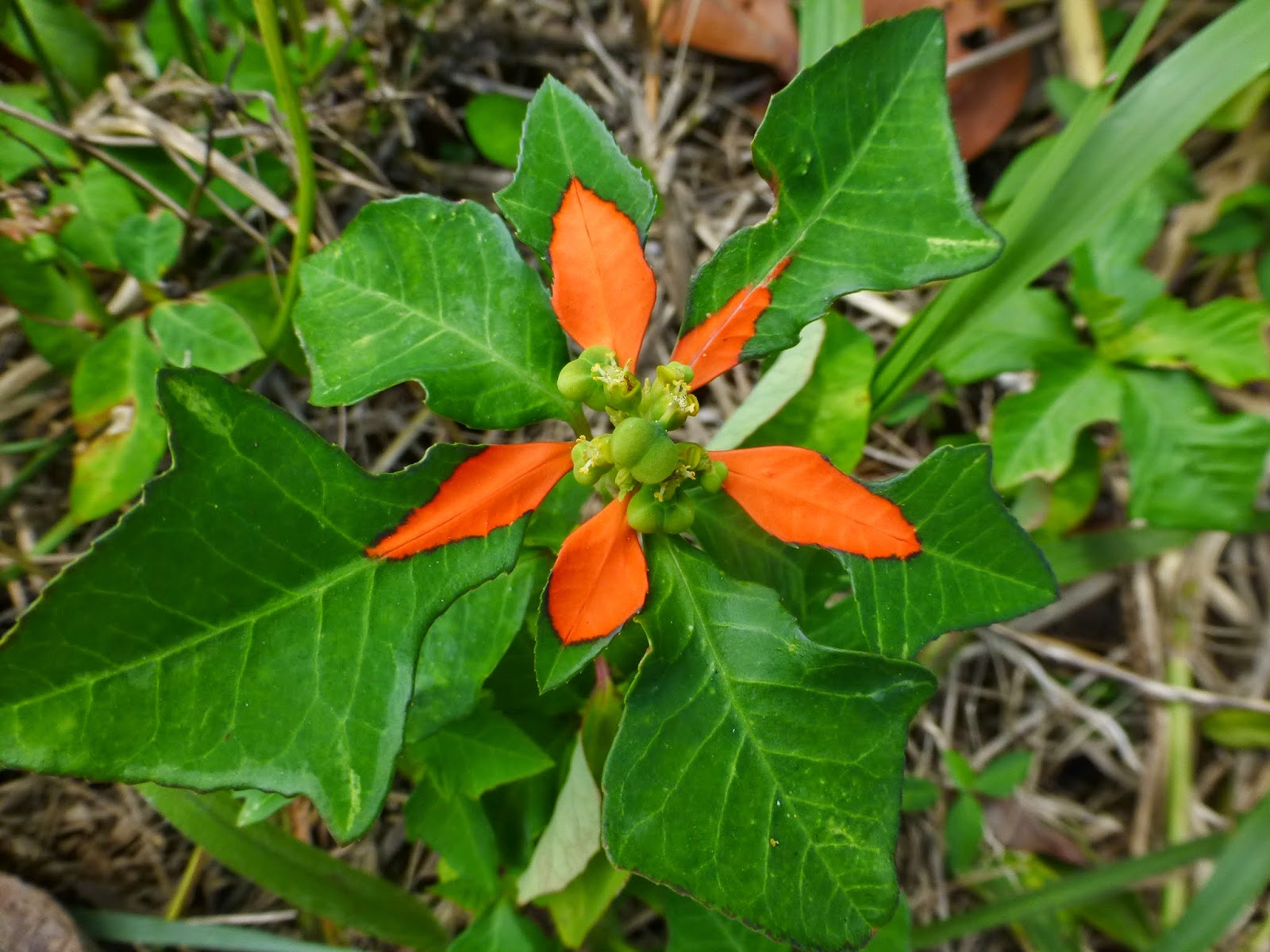 Cultivated poinsettias, of course, are wildly popular as Christmas decorations in the U.S., growing so in Europe as well, but this is a relatively recent development. Though the plant’s association with Christmas goes back several hundred years to rural Mexico (with the bracts only turning their color as night-time dark fully lengthens near December’s winter solstice), it took an enterprising German immigrant family from California by the name of Ecke, in the mid 1900’s, to popularize them there; having first sold them from street stands this time of year, the family also perfected the graft technique that enlarged the show of red color. And with the combination of the red color, indicative as it may be of the color of the shed blood of Jesus Christ, and the pointy leaves, which some characterize as expressive of the star over Bethlehem, it was only a matter of time before its marketing would permeate the seasonal culture. And what could be bad about that, beautiful as it is?

Jesus said, “Walk out into the fields and look at the wildflowers. They never primp or shop, but have you ever seen color and design quite like it? The ten best-dressed men and women in the country look shabby alongside them! And if God gives such attention to the appearance of wildflowers, don’t you think he’ll also attend as well to you? So steep yourself in God-reality… You’ll find all your everyday human concerns will be met.” (Matthew 6:28-30,33, MSG)

Be reminded of God’s attention and intention toward you! Have a blessed Advent!