POTM...*: Pictures on the Rocks 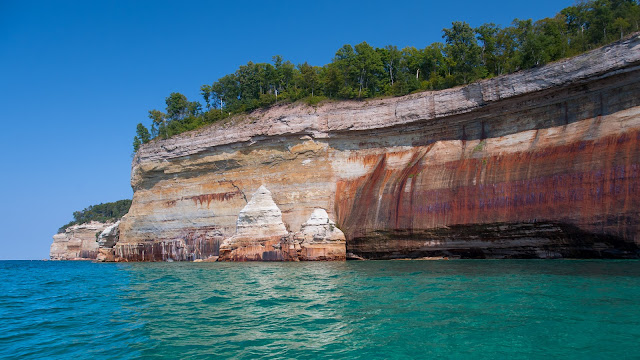 Gail and I had the good pleasure of spending a couple days with my brother John and sister-in-law Cathy recently in Michigan’s Upper Peninsula, and we spent one of those days doing something I’ve long wanted to do: see Pictured Rocks National Lakeshore from the water. We had been there twice before, once when the kids were all quite young and once since, but the opportunity had never lent itself to see it the way it was meant to be seen. 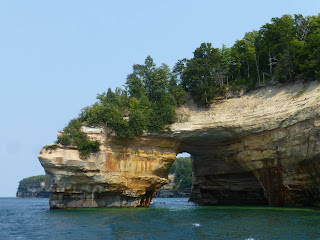 Pictured Rocks is one of the least-visited units in the National Park System, with just over a half million sightseers, hikers and kayakers per year. The fact that many might say it is ‘not on your way to anywhere’ is responsible for most of this, as the astonishing beauties of Michigan’s U.P. are unknown to most who even travel widely. To set it in context, it lies between the metropolises of Munising and Grand Marais. Oh, haven’t heard of those? Let’s expand it a bit: how about between Marquette, home of Northern Michigan University, and Sault Ste. Marie (home of 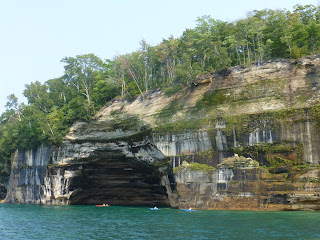 Lake Superior State University, and twin cities with Sault Ste. Marie, Ontario, Canada). Haven’t heard of those either? Well, I can’t help you then, except to say, “Get there!” It’s only a single but lovely day’s drive for Detroiters, Chicagoans, Milwaukeeans and Minneapolitans/St. Paulites.

Hugging forty-two miles of rugged Lake Superior shoreline yet barely six miles wide at its broadest, PRNL was the first designated National Lakeshore among the National Parks (1966). And Lake Superior, the largest freshwater lake in the world, is itself one of the founders of the feast – the relentless crash and howl of its breakers and winds against two-hundred foot sandstone cliffs have shaped the formation of the park’s 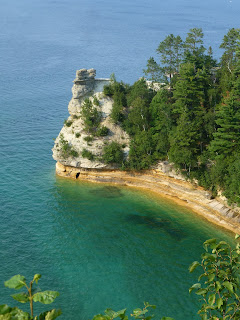 sea caves, arches, dunes and agate-strewn beaches. And then the minerals held within the sandstone have done the rest, leeching along with groundwater out through the rock layers and, over time, painting the rock face a myriad of colors – red (iron), yellow and brown (limonite), black and white (manganese), and pink and green (copper), among others. One cannot see many views of the rock face without getting on the water; the Miner’s Castle overlook is one, pictured here, so it’s really a lake cruise or kayak trip you’ll want to experience to be able to fully enjoy it, or at least a hike down to one of its beaches. Yes, there are beauties in the interior as well, falls and primeval forests, wildflowers and wildlife, particularly pleasing in early spring and autumn dress; but it’s the waterfront rock cliffs for which the park is set aside as a U.S. citizen-owned marvel, and I am glad we were finally able to see them. 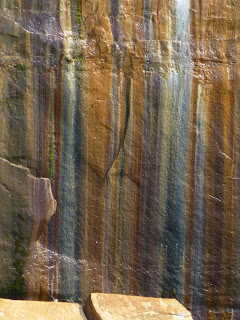 Color. I’ve often thought about the detail given in the Old Testament of the Bible regarding the tabernacle and temple in which the people of Israel worshiped. It gets right down even to particulars about the colors of hangings, linens and priestly clothing (Exodus 35-39, 2 Chronicles 2-3). I guess it’s only fitting that such attention be given; after all, the colorful glories of nature were God’s original temple, and they remain so.