From My Nature Journal: Making Peace with Western Washington Weather While On the Road to Rhodies 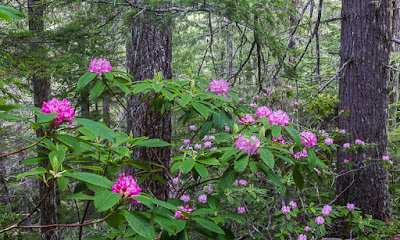 Okay, it’s time. I’ve been here long enough and I’m done bellyaching about Western Washington weather. And though it’s stretching me, I may even be ready to begin making peace with it.

No, Colorado, that doesn’t mean we don’t still miss you desperately, and the utopian weather we’d relished all our years with you. Your year-round nearly predictable sunshine was a hiker’s delight, and this Vitamin D deprived region could use a bit more of it. Oh, weather is predictable here from October to May, too, if you want to call ‘rain and within six degrees either side of forty-two’ predictable. It’s just that it’s about time I stopped moanin’ and groanin’ about how much we dislike the rain here. They said it would take a year for us to get accustomed to it. They lied. We’re still not used to it. That being confirmed, it’ll take an act of the will to make that happen.

And so, as an expression of that will and a symbol of my new resolve, Gail and I went to REI a few days ago and I outfitted myself with some serious Gore-Tex raingear, inaugurating it yesterday with relative success. No, I’ve never paid that much even for a Minnesota-worthy winter parka, or maybe even the three winter jackets put together that I’ve owned in my entire adult life. Still, though I can’t yet say that I LIKE hiking in the rain, at least I’ve made a start of it.

But in addition to my brand-spanking-new orange raincoat, there’s another thing that is motivating me these days: we’re coming up on rhody season here in the Pacific Northwest. Yup, the Pacific Rhododendron -- the Washington state flower -- is about to make its annual showing. Our little acre here in the woods outside of Coupeville, in fact ALL the wooded areas in the region, are nearly covered with the dazzling things, and we can hardly wait to see them in bloom, yes, even while we hike in the rain. In fact, it’s going to take a hike in the rain to see them, rhodies, among the loveliest of state flowers. 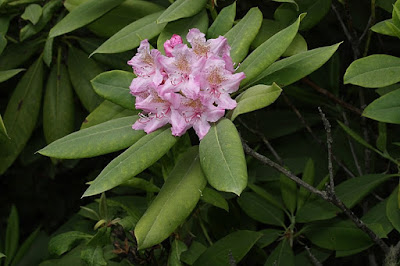 Rhododendrons are found in numerous places around the world. In fact, a thousand of these evergreen species are known in Europe, China, Australia and North America. Besides, horticulturists have cultivated many hybrids for garden plantings over the last two hundred years. But the wild Pacific Rhododendron, rhododendron macrophyllum to be precise, may be one of the most beautiful, especially in the context of its natural environment. A leggy, understory shrub that can grow to twenty feet and more while it reaches for light beneath towering conifer groves, its large, showy and prolific light pink to purple blooms stand out refreshingly on gray, misty days, particularly amid the dark, wet trunks of enormous Douglas Firs nearby. Made prolific due to toxins in the plant that make them unpalatable and unbrowsable to deer, it is that aforementioned rain combined with the acidic soil beneath those gargantuan conifers that make conditions right for the rhody to thrive.

And those trees themselves present another ambience unique from my more familiar Midwest haunts: on wooded trails snaking through giant fir groves, it might be upwards of fifty feet from the forest floor to the lowest branches, leaving a cavernous, auditorium-like opening akin to a large room, one full of flowering bushes. R. macrophyllum, which literally means ‘rose-tree large-leafed,’ stretches from southern British Columbia to northern California, and is variously known as the Pacific, California, Western, Coast or Big Leaf Rhododendron, or the California Rosebay. It was first described for science by famed botanist Archibald Menzies, who collected the plant in Washington while accompanying the Pacific Northwest exploration of British sea captain George Vancouver in 1792. 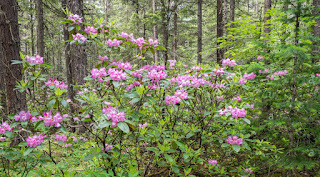 So back to the rain. The Bible says that God causes his rain to fall on the just and the unjust (Matthew 5:45), inferring that his manifold blessings are heaped upon both those who revere him and those who have not yet learned to do so. I am grateful for wild rhododendrons, how they will beautify the forest under dark and rainy skies. My new raincoat and I are ready for them now.

“Consider the lilies,” Jesus said, “how they grow. They don’t toil or spin, yet I tell you that even Solomon in all his glory was not dressed as one of these. But if God so clothes the grasses of the field… can you not trust God to care for you?” (Matthew 6:28-30)

Posted by Rick Mylander at 9:29 AM