POTM...*: A Symbol for the In-Between-Time 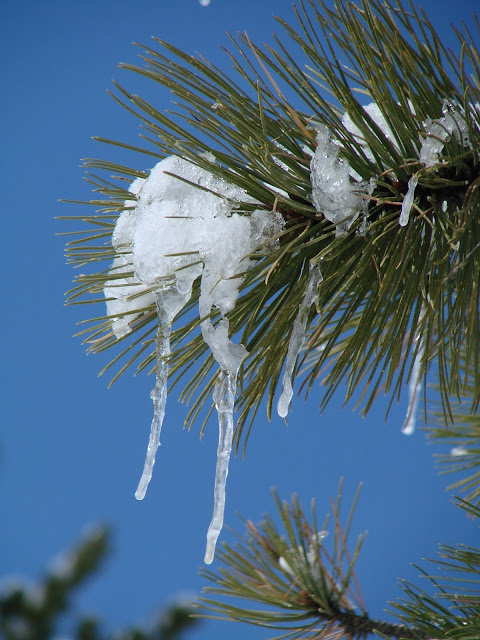 There is something amazingly beautiful about tree icicles, but the weather needs to cooperate in just a particular way for us to enjoy them. First there’s snow, of course, heaped and resting on the end of a conifer branch. Then there’s the right combination of sun and temperatures -- warming and freezing, but not too much of either -- and voila! There they are. These conditions are not particularly rare here in Colorado, especially this very time of year, but still, it would be nice to see them more often.  They can be anywhere from one to seven inches long or so; these are about five.

Remember icicle decorations on Christmas trees? There were the white plastic ones with the little molded hook on top. (When I was a kid we had some that glowed in the dark. I thought they were wonderful and would sneak them off to bed with me.) And then there was tinsel, the last decoration to go on, folded up in old musty newspaper and seeming like the Ghost of Christmas Past. (I remember both the lead-covered and the plastic kinds, shaking my head in wonder at how much lead-poisoning must have taken place when we rolled those leaded babies into little balls in our hands and didn't wash them. The plastic ones were also cool to a kid because you could pull them through your closed fingers and make your skin turn silver…) Once we got them unwrapped from the newspaper I wanted to throw it on the tree in clumps, but my Mom insisted it be hung a strand at a time. Thus, she got the privilege of doing it most often! To me it did not look like icicles, but neither do the strands of dangling lights that people put on their houses.

Icicles on a Christmas tree have a bit of symbolism to them. First, there’s an old folk story of the newborn Jesus and his family taking refuge under a conifer while snow was falling; the tree wept tears of joy to bear such a privilege, producing the icicles. And some see in the icicle also a symbol of the spikes with which Christ was eventually nailed to the cross, tying Christmas together with Easter. So a tree icicle is a meaningful symbol for the time in between the two high holy days of the Christian year.

We just got major snow yesterday. I’ll have to strap on the old snowshoes, head out to my favorite county open space and see if I can find some.