(*Quote of the month) 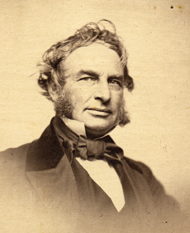 And nature, the old nurse, took
The child upon her knee,
Saying, “Here is a story book
My Father hath writ for thee.
Come, wander with me,” she said,
“In regions yet untrod,
And read what is still unread
In the manuscripts of God.”
~~ Longfellow

Henry Wadsworth Longfellow was a 19th Century American poet, writer, and educator. A true romantic, and wildly popular in his day, his work came under criticism after his death for being somewhat sentimental and catering to the masses. But since I am a pretty sentimental guy and don’t mind people catering to me, I find I enjoy a good bit of his work! And that for the same reason that I like cheesy Rodgers and Hammerstein musicals and the movie “It’s a Wonderful Life!”

Though he is not categorized with the transcendentalist movement exemplified by Emerson, Thoreau and Whitman, some of the themes common to that movement, such as nature and theism, are well apparent in Longfellow’s writing. My favorite is Evangeline, a beautiful love story of an Acadian couple separated in their youth and reunited in their old age. Being a lover of the Northwoods, I find The Song of Hiawatha also a very pleasant read. I have both on my phone and refer to them from time to time while standing in a slow line. (You can download either for free through Gutenberg or Amazon.) The quote above is an excerpt from one of his abundant shorter poems.

Many writers speak of nature as ‘the book of God,’ or, as in Longfellow’s case here, the manuscript of God. That concept is even alluded to by the Apostle Paul in the Epistle to the Romans: …What may be known about God is plain to people, because God has made it plain to them. For since the creation of the world, God’s invisible qualities—his eternal power and divine nature—have been clearly seen, being understood from what has been created, so that people are without excuse [when they say they have had no way to know God]. (Romans 1:19-20, parentheses mine)

Posted by Rick Mylander at 4:27 PM