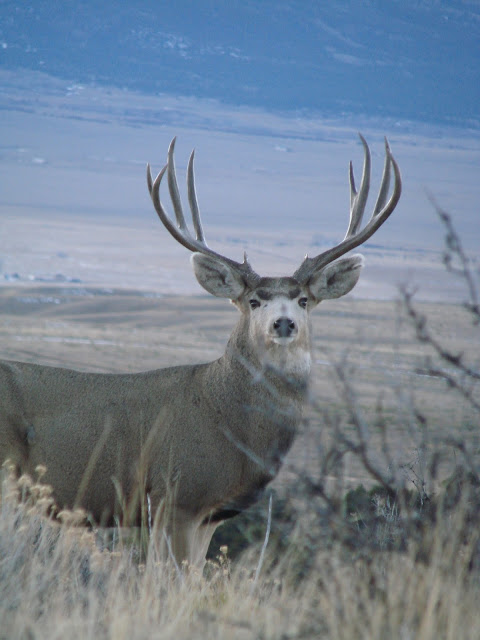 On our regular evening jaunt tonight, Gail and I paused from our hike on the East Plum Creek Trail to watch a handsome five-by-five mule deer buck prancing up a draw, right next to the trail. He was barely thirty yards away. We had no camera, as it was one of our more routine exercise hikes; but it was past sunset anyway so a photo would have been futile. As we had walked up to that time, I had been thinking about what I might use for my blog’s photo of the month. That experience inspired me to pull out this one, taken while we camped some time back down in the Wet Valley near Westcliffe.

I don’t know what it is about deer and elk: to me they are the most majestic of God’s creatures I have the pleasure of observing in the wild. And though I see them often, they never cease to cause me to stop immediately in my tracks, and just watch.

Mule deer here in Colorado are very different in personality than whitetails back east. They’re far more gregarious, sometimes have even curiously approached us to within ten feet as we stood stock-still. Our most favorite difference is that the bucks are almost as gregarious as the does, which allow us to see them up close. Whitetails are so furtive that it’s hard to get a good look at a large buck; they stay deeper in the woods and don’t show themselves very often. Not so mule deer. In fact, my son-in-law BJ, an avid whitetail hunter from Wisconsin, could hardly believe his eyes the first time he experienced ‘mulies’ on a visit out here.

Since many of my readers are from the eastern U.S. where whitetails predominate, I’ll mention some other differences as well. As could be imagined from their moniker, their ears are larger, but they are barely more related to a mule than you or I! (OK, OK, sometimes some of us might be more related to a mule…) They also tend to be a bit taller and weigh more on average, but I would characterize their difference in shape by saying that mule deer are somewhat more barrel-chested than a whitetail. Their tails are tipped in black and don’t show the obvious upraised ‘flag’ a whitetail does when it runs; and speaking of running, they also run differently, whitetails doing more galloping two-footed leaping, and mule deer more four-footed bounding and prancing. A difference less obvious, but a pure giveaway to those who recognize it, is their antlers: mule deer antlers fork into two distinct branches, whereas whitetail antler tynes rise (or sometimes fall) off a single beam. Finally, there are far more whitetails on our continent than mule deer, and though whitetails can often overpopulate in certain areas, for some reason mulies don’t tend to do that.

Colorado actually has populations of both, with almost exclusively whitetails in our eastern high plains and almost entirely mule deer in our foothills and mountains. Still, I have seen both on a lovely butte-top trail Gail and I often enjoy south of here, Spruce Mountain Open Space. 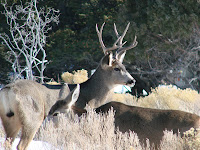 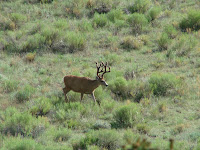 I’ll include three of our other photos here. Since they’re not my official POTM, I’ll attach them in a format smaller than that above, but click on the photo if you want to see them up more closely. Unlike above, the antlers of two of those shown here are still in ‘velvet,’ the photos captured early in the season when antlers are somewhat ‘hairy.’ Velvet is rich in blood vessels and essentially feeds the antlers’ growth, but once they have reached their maximum size for that year the deer work hard to scrape it off against trees and brush, revealing the shinier and more recognizable antlers people see most often. And did you know that antler size is not necessarily a key to the animal’s age? It has as much, sometimes more, to do with the health and diet of the animal as its maturity. 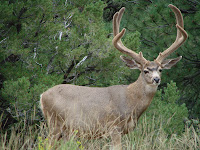 What do you see about the deer in the middle that is odd? I apologize for it being a bit out-of-focus, but I wanted to show it, as the animal is absolutely spectacular. Look closely and count the tynes on each side. It was a seven-by-five at this point, though you can be sure the antlers were still growing. What a beauty! Praise God for God’s wonderful works!