…The woods has many doors going in and out. It is full of rooms opening into one another, shaped by direction and viewpoint. Many of these rooms are findable only once, from a certain direction on a certain day, in a certain light, at a certain time. They could not be returned to either now, after years, or then, after an hour. Windows open in the foliage, through which, maybe, we could see a hawk soaring or a distant treetop suddenly shaken by a gust of wind. Sometimes these rooms and vistas seem arranged for us, for our pleasure, as in a human garden. But these, of course, do not constitute the woods, which is not a garden, and is not understandable and foretellable so much as a garden is. We come sometimes into a place of such loveliness that it stops us still – and holds us – until some changing of the light seems to bless us and let us go.
(Wendell Berry)

One of our favorite places in the world is a small bit of woods in the middle of the Ottawa National Forest in Michigan’s Upper Peninsula. We have spent many years going back there, and over that time have spent uncountable hours combing that bit of woods and the expansive woodland that surrounds it. We know its colors and contours, its clearings and swamps, its rocks, plants, animals and, yes, its trees. And many times, many times, we have seen the ‘rooms’ of which Wendell Berry writes. Many we remember to this day.

The woods has many doors going in and
out. It is full of rooms opening into one
another, shaped by direction and viewpoint. 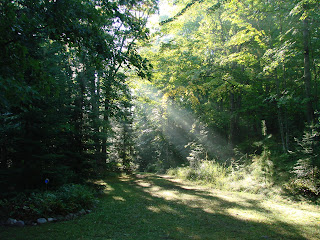 Berry (b. 1934) is a farmer, essayist, novelist, environmental activist and poet who embodies what I consider the best of an ecologist’s heart: a heart for God, a heart for people and a heart for God’s creation. Though many are acquainted with his writing through either his poetry or his incisive commentary on sustainable agriculture and the uses of appropriate technologies, it is his fiction that first captured my attention when daughter Sarah gave me his Jayber Crow, in which the above quote is found. Several of his novels and collections of short stories chronicle the intertwined lives of the people of the imaginary Port William, Kentucky; but the reader quickly comes to see Berry’s simple yet profound convictions as an environmentalist playing out in the character development and story lines of his fiction. Pick up a copy of his That Distant Land at your public library, and you will be introduced to a host of his characters over a century of time, many of whom are written of or referred to in his novels. This is no Father Tim of Jan Karon’s Mitford Series. These are characters in which you, like me, will find yourself, undergoing the normal challenges and pleasures of life -- strong characters, purposeful characters – yet in the midst of profound change and cultural shift.

But back to the woods. We’re heading up that way again soon, you know, and are looking forward to going in and out of its rooms, enjoying the changing perspectives that sun, angle and atmosphere will present, receiving the blessing it always has to offer, and then moving along.