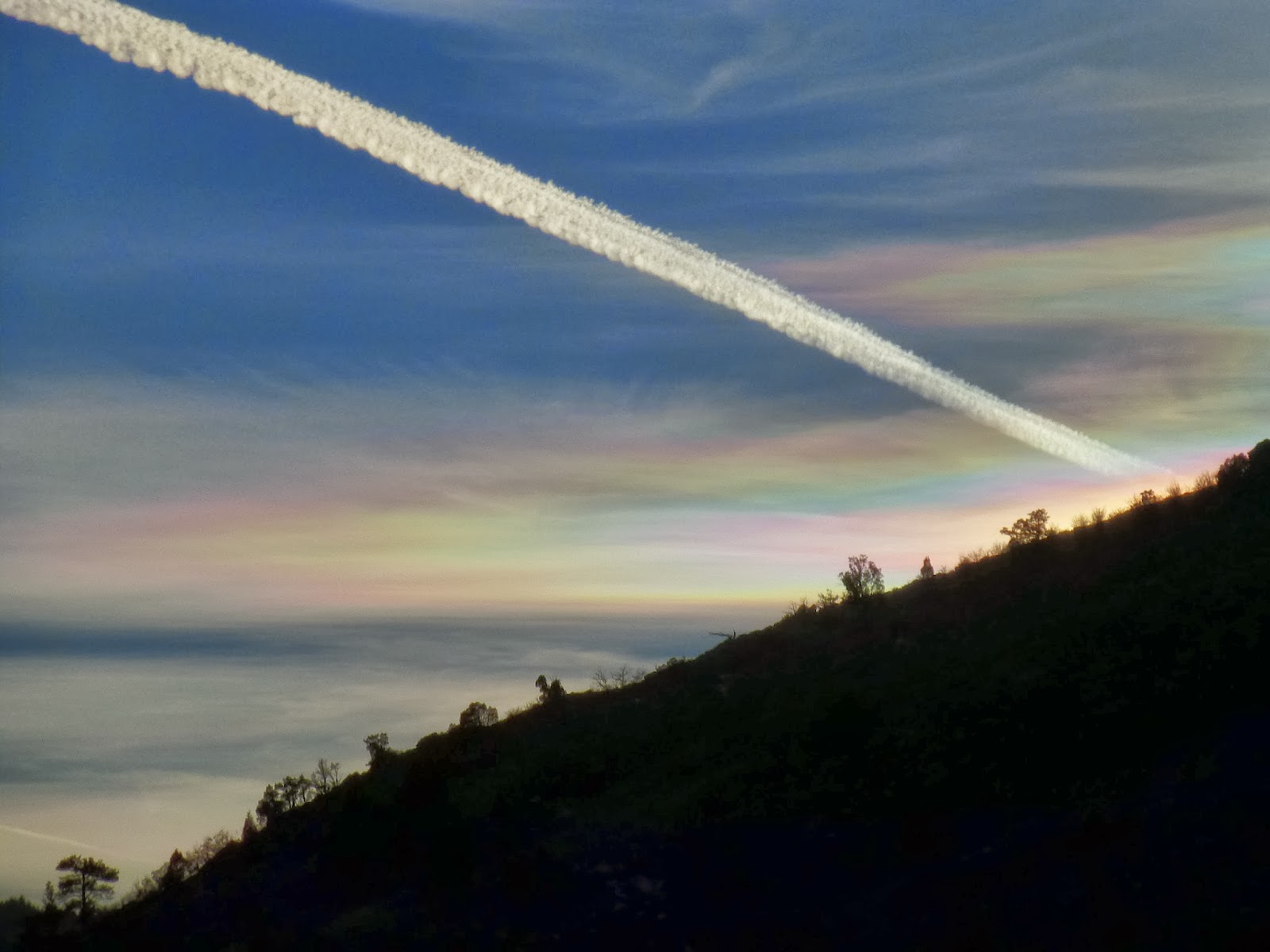 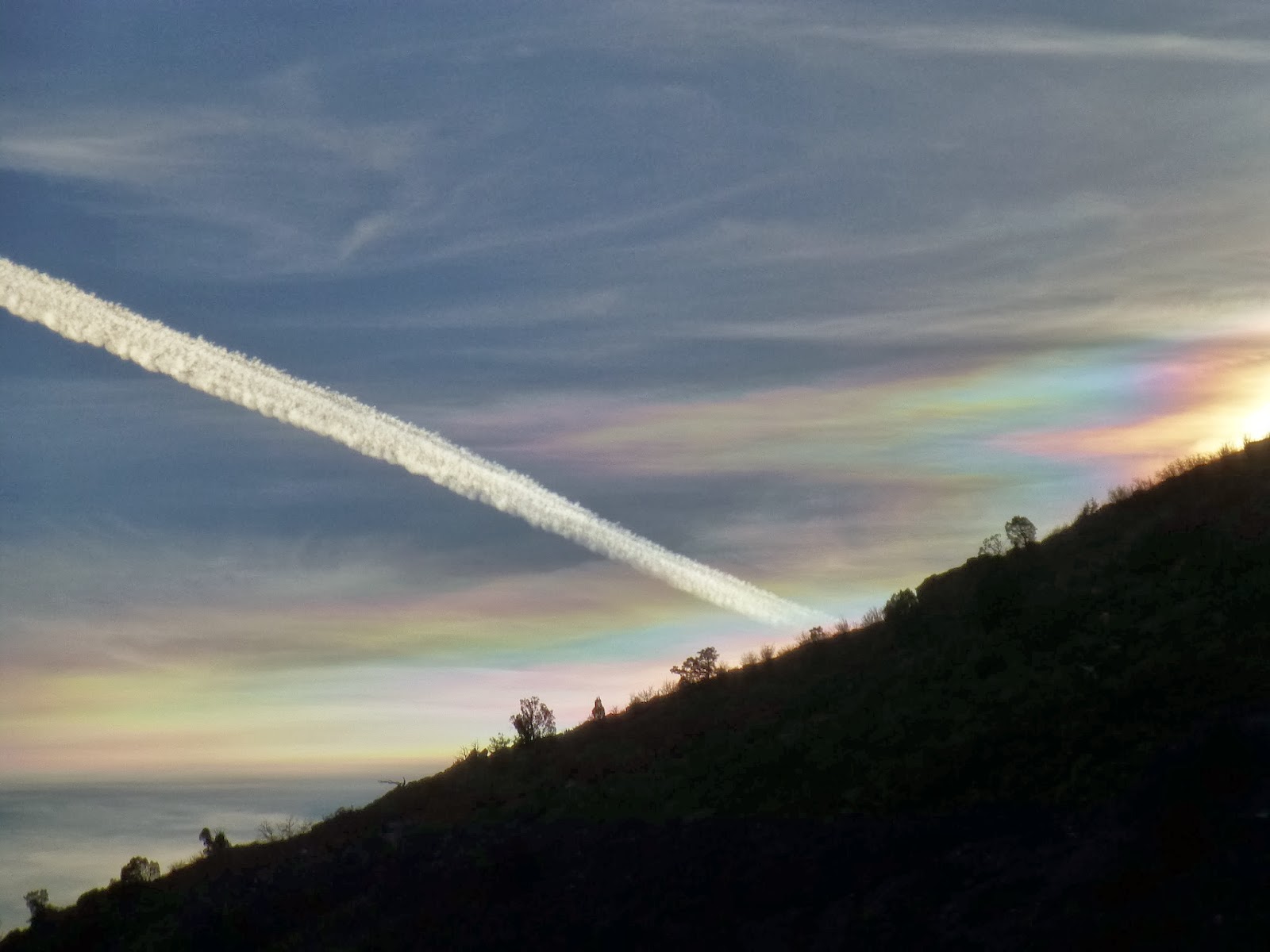 I have been eager to post these. Gail and I took them last month on our way down the mountain from an afternoon drive southwest of Denver. We thought we were noticing some strange color in the midafternoon clouds, but the sun nearby was just too bright to see it well. Then we positioned ourselves where a ridge could block the sun’s glare, and the colors became strong and much more clear. It wasn’t sunset color. It wasn’t some kind of rainbow or sundog. What was it? 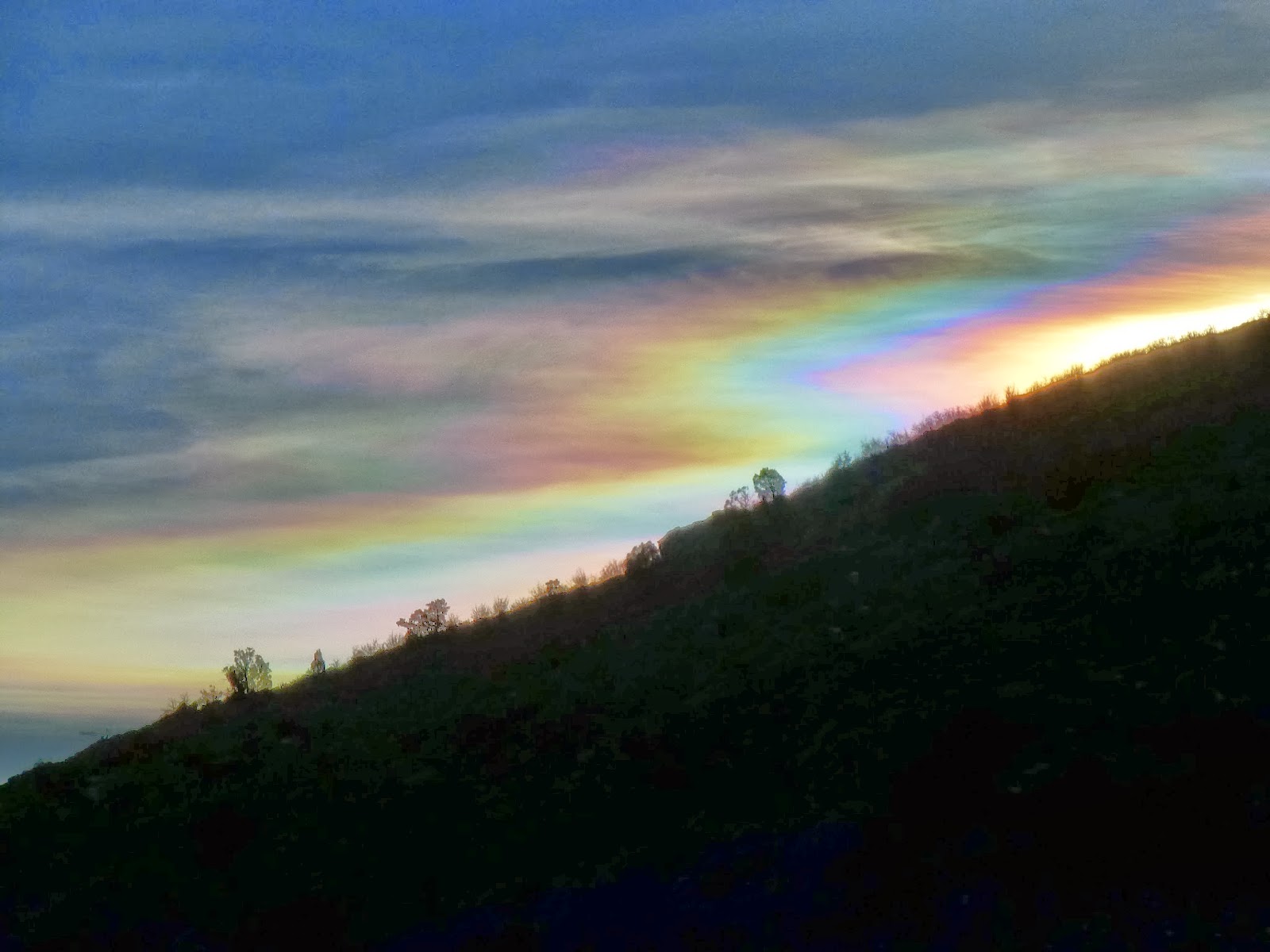 Now I know. It’s simply called iridescence, perhaps in this case, more accurately, altostratus iridescence, and it’s a fairly rare sky phenomenon. In fact, I can recall having seen it only one other time, and that was while visiting our kids in Seattle, out with them on a ferry in the middle of Puget Sound. We all looked up at it in collective wonder. These photos here were taken from top to bottom over a seven-minute period at about 3:30pm last midmonth. Click on a photo to enlarge it. 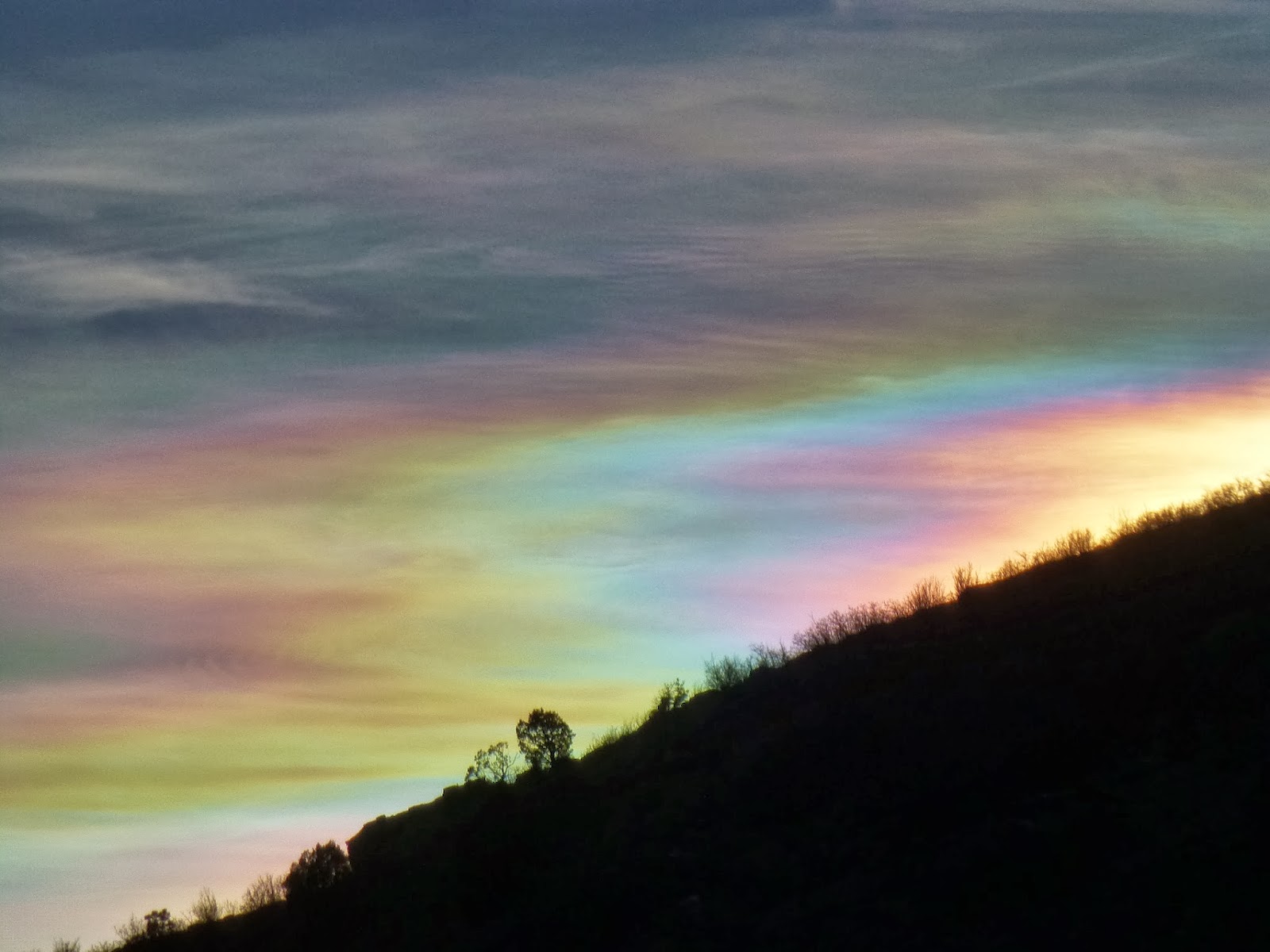 Iridescence is caused by the same atmospheric conditions that create coronas, also fairly rare: light diffracting around an object, in these cases, around a cloud’s water droplets. Coronas (Latin for crown) are round, and surround the actual sun or moon as a rough circle through a bit thicker sky; iridescence is a more imperfect corona, seen more diffusely among mid-level clouds that are sparser but near the sun. With either, the cloud’s water droplets must be of a certain, uniformly small size, and the cloud fairly thin, thus the marvel’s rarity. Additionally, they can be seen best in the presence of altostratus (mid-level, layered) or altocumulus (mid-level, clumped) cloud forms. 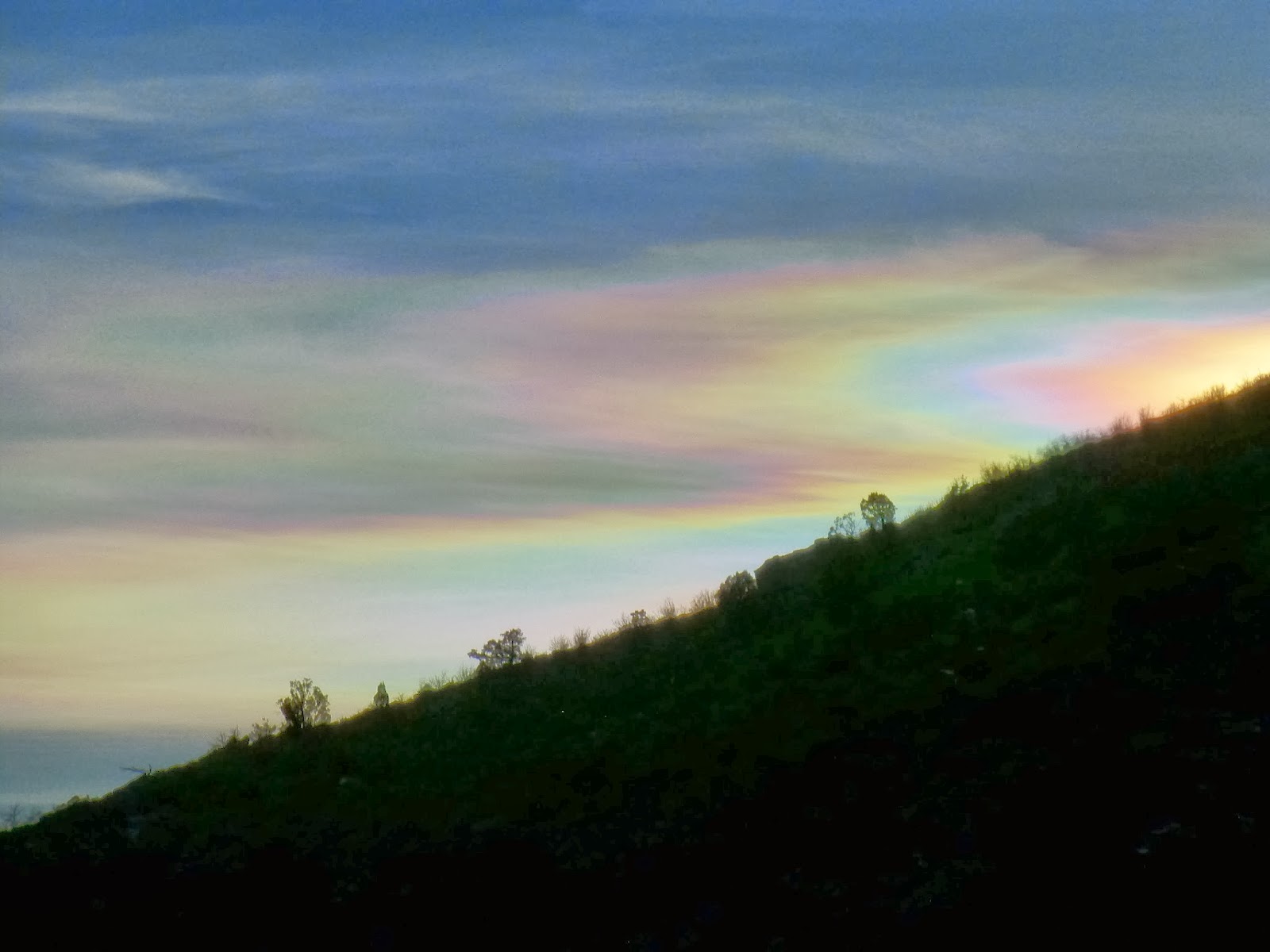 I hope that’s not too much science! But if you’re interested in another of the sky’s very interesting optical effects, hit this link and it will take you back to a post I did last summer after seeing a complete sun halo, or aureole, in Alaska. (Hmmm… that was also while visiting my kids: it’s just another good reason for me to visit my kids a lot more often, so I can see cool things in the sky!) 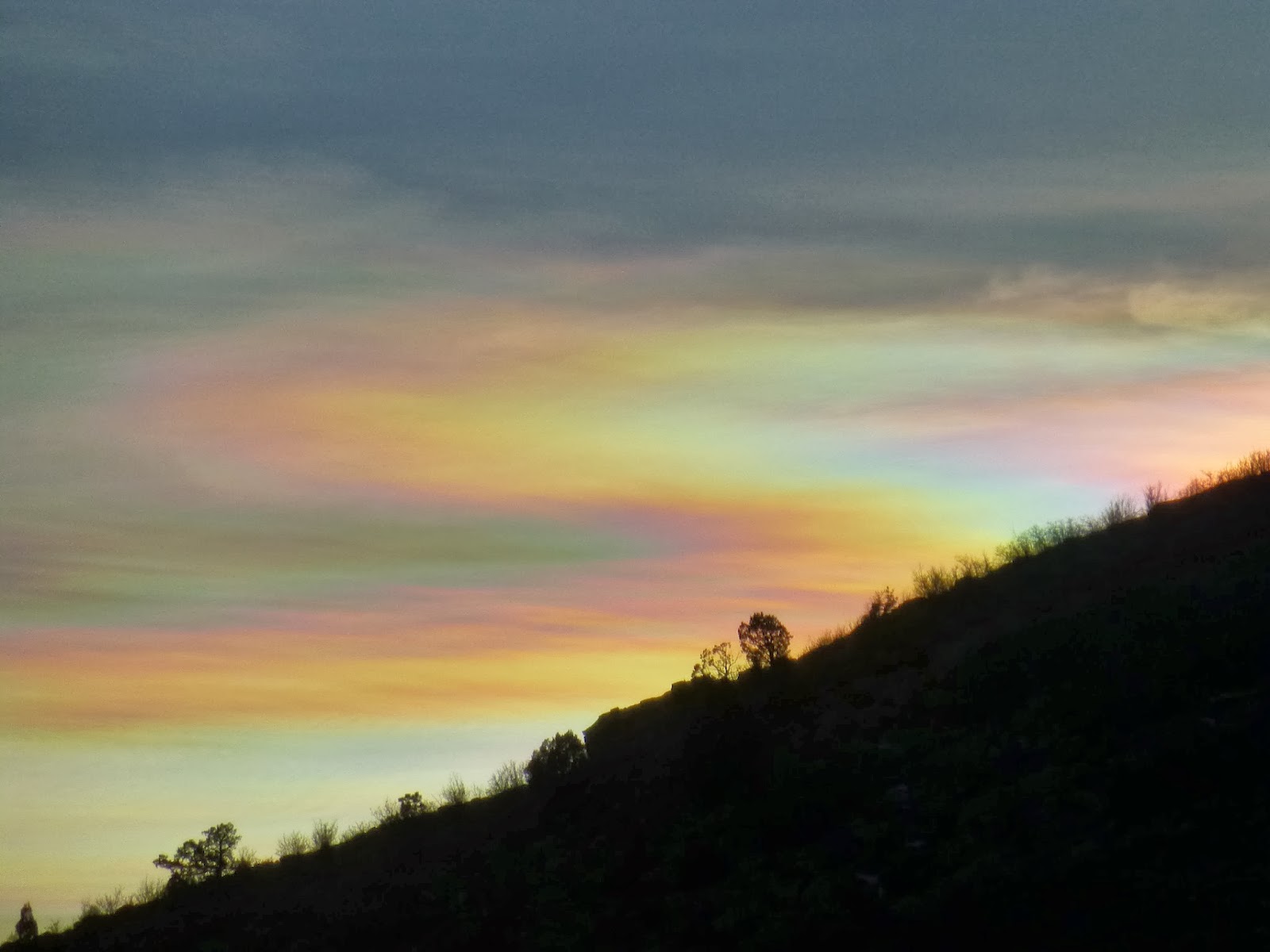 The scriptures say that at Jesus’ second coming he will return ‘from the clouds,’ and that all the earth will see it at once (Revelation 1:7, et al). Years ago one might have wondered how that might even be possible; but today, with satellite transmission and handheld technology it no longer seems unreasonable. How well I remember my beloved Bible professor, Dr. Paul Sebestyen back at North Park College in Chicago, getting absolutely wistful when he would speak about it: the ‘parousia’ as he called it. To this day, when I see phenomena like this I like to pause and imagine Jesus stepping out of the cloud. It’s a happy thought.