OK, welcome to the world of chile peppers... 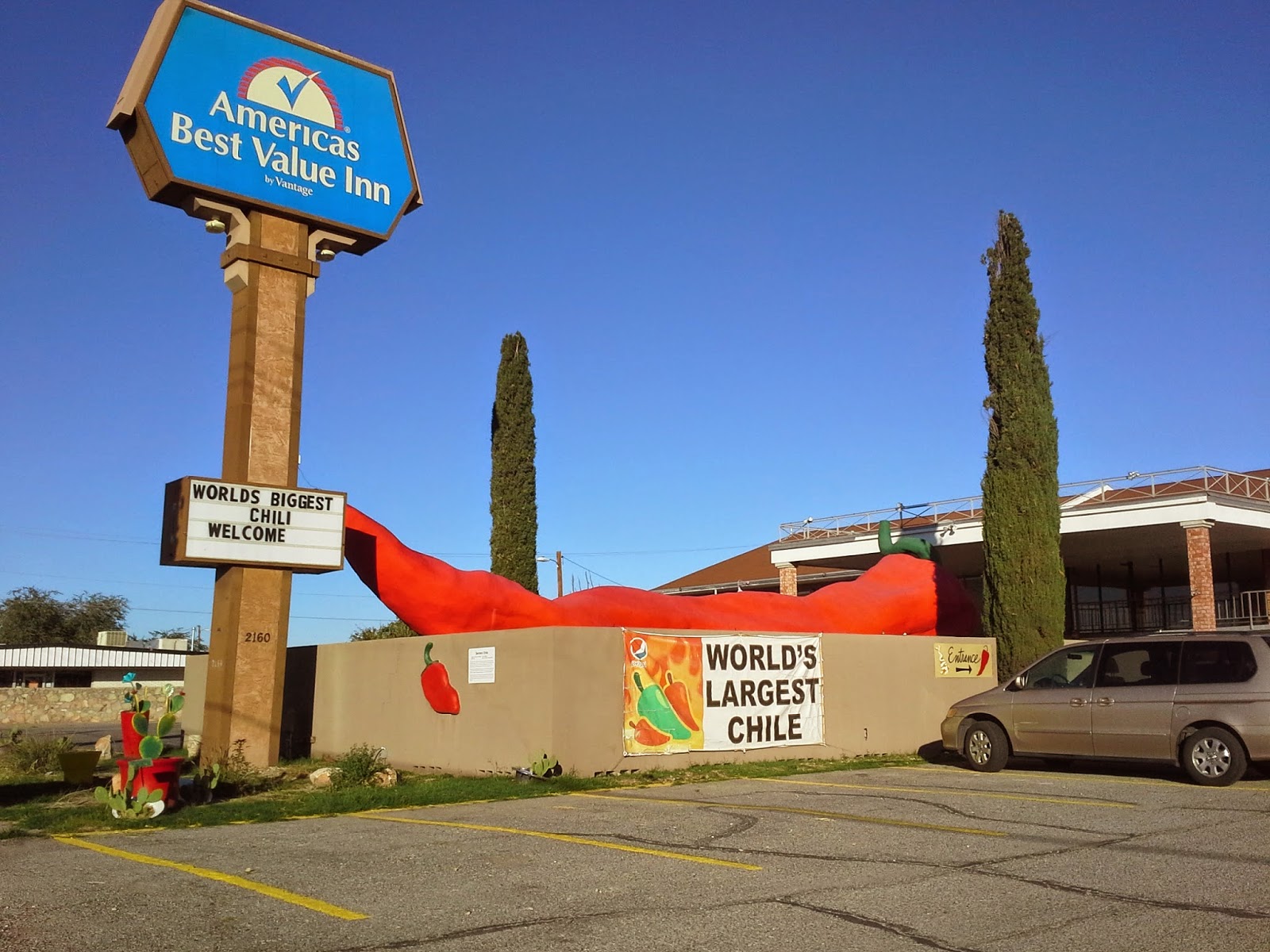 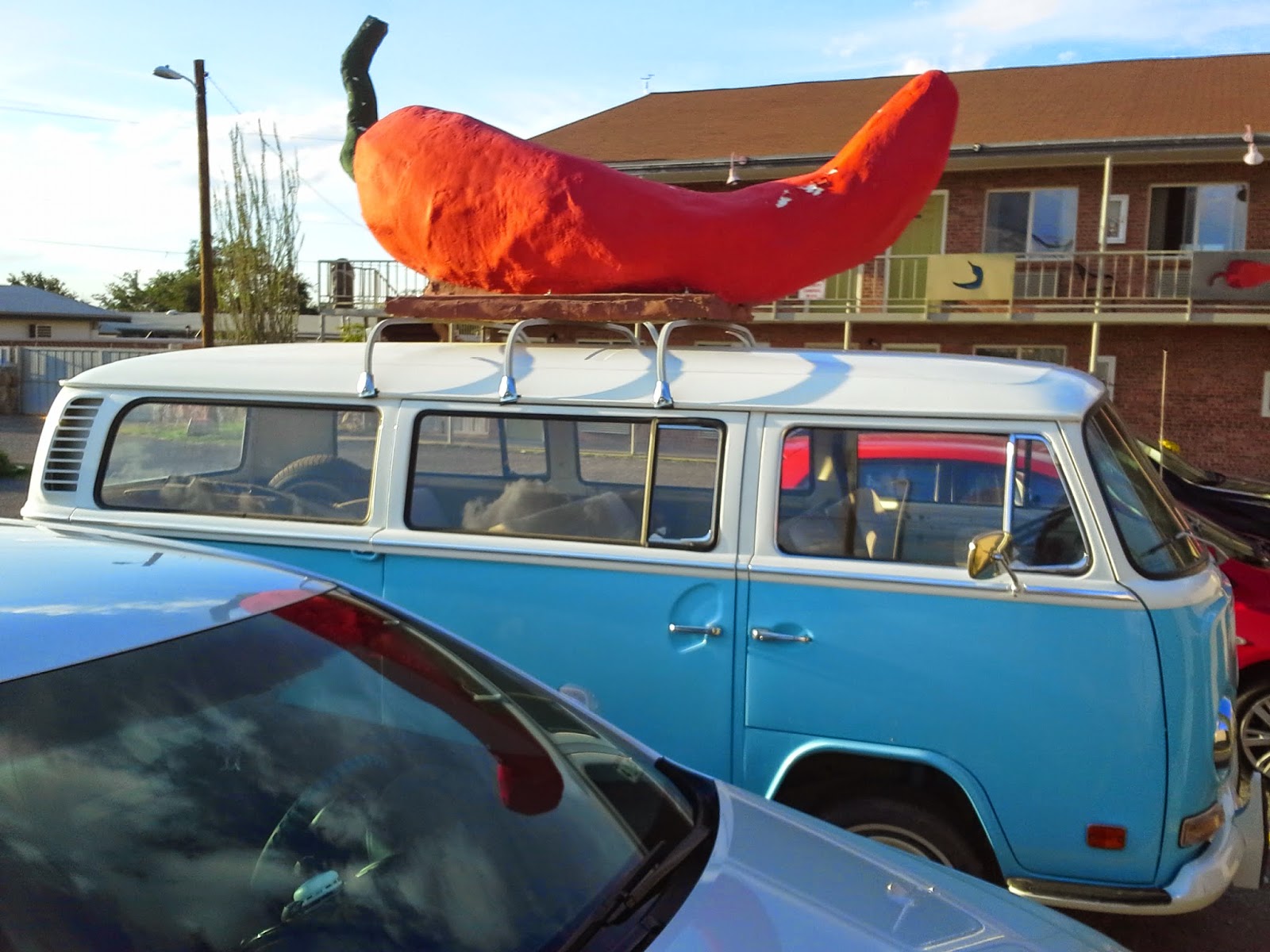 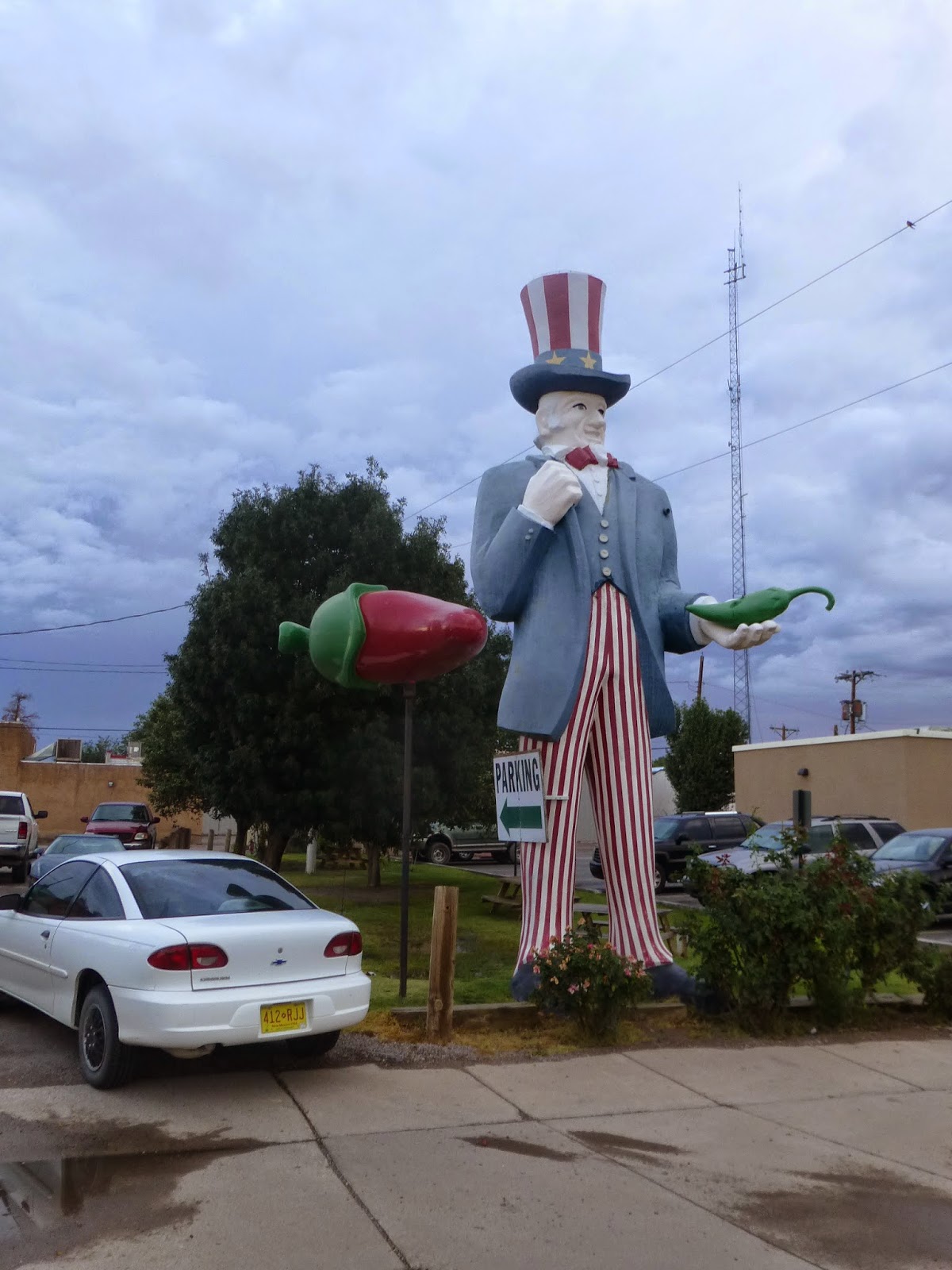 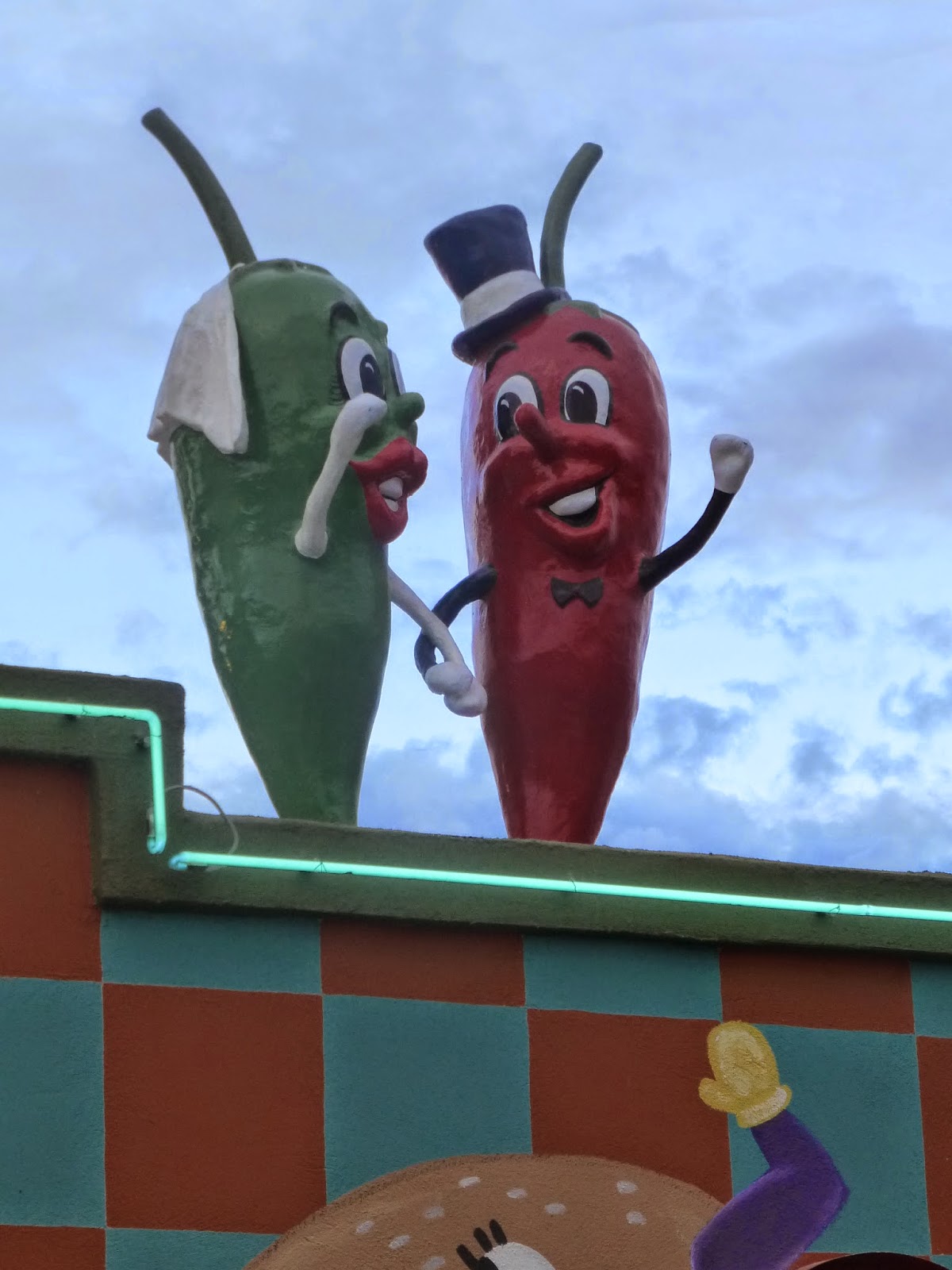 If there’s one thing that has epitomized our southern New Mexico cultural experience in the months since we began working down here, it has been our introduction to the (not so) humble and ubiquitous pepper. I have never lived anywhere that has so enthusiastically embraced a local agricultural product! (What it reminds me of is Chicago’s lust for the Chicago hot dog, a vice I share; alas, the dog is not an ag product unless you’re considering its tomatoes, onions, green relish, celery salt and pickle spear…) But frankly, my own experience can also testify to just how passionate one can become about such a food item as the green chile (a red chile not fully ripened), especially when tenderly filled with cheese and served in the form of a testy chile relleno, baked into a good bagel, or laid sassily atop a burger for that most delectable of all treats, the green chile cheeseburger. The green chile milkshake from Sparky’s in Hatch? Well, that one was a little over the top. Some of the photos you see above demonstrate the love affair this area has with this unique culinary delight, and I doubt one would ever see folk icons like these in Peoria or Poughkeepsie. Only in New Mexico, the pepper’s largest producer, and the green chile Capital of the Universe… They love their chiles.

Recently, Gail and I visited the Chile Pepper Institute on the campus of New Mexico State University in Las Cruces NM, in order to learn more of its cultural lore. Did you know, for example, that a medium-sized green pepper pod contains the vitamin C of six oranges? That hot peppers burn calories by speeding up metabolism? That the color extracted from red chiles, called oleoresin, is used in everything from lipstick to processed meats? That peppers are relatives of potatoes, tomatoes and eggplant, all of which are members of the poisonous nightshade family? That birds eat the hottest ones freely since they have no heat receptors in their mouths? Didn’t know these things? I didn’t either.

Now for the amazing part, the pepper’s apparent heat to mammalian senses. Chile peppers contain a chemical by the name of capcaicin (cap-say’-i-sin) that produces the heat effect in the food. The chemical is even used in treatments and patches for sore, aching muscles. Among other things that the Chile Pepper Institute does in promoting and researching peppers, they also test the numerous natural varieties of chiles from around the world to determine their true heat impact (twenty-six known natural species, five of which are domesticated). Heat is then measured using what is called Scoville Heat Units (SHU’s). Take a common pepper often enjoyed on nachos served at baseball games, the jalapeno. This pepper has an average heat index of 10,000 SHU’s; that’s hot, but it’s just a poser in the pepper world. There is a pepper called the Bhut Jolokia (boot ja-lo’-ki-a), from India, that was formerly discovered by the CPI and proclaimed by Guinness World Records to be the most potent pepper in Peter Piper’s peck. This pepper has an average heat index of just over a million SHU’s, one-hundred times that of the apparently milk-toast jalapeno! Cleverly, at the time that the Bhut was pepper king of the hill, the CPI developed a brownie mix as an institute fund-raiser that included the pepper as an ingredient; you guessed it, they named it Bhut-Kickin' Brownies. I just bought a package of the mix last week and can’t wait to give them a try. In fact, it’s a product you can easily order online (internet address). Maybe you remember that enjoyable little movie Chokolat, where Juliette Binoche plays a chocolatier opposite Johnny Depp and Alfred Molina, whose secret ingredient in her recipes is cayenne (one of the ‘milder’ peppers at 40,000 SHU’s).

However, records are made to be broken, as even Brett Favre said a week ago when the Denver Broncos’ Peyton Manning threw his 503rd career TD. Such is also true in the pepper wars. For it wasn’t long ago that a pepper from Trinidad, the Trinidad Moruga (ma-roo’-ga) Scorpion, was discovered by the CPI to be the world’s most potent pepper with an index average of 1.2 million SHU’s. Peppers in the same field (or even on the same plant) can vary widely in their heat index, depending on the moisture they receive and their access to the proper amount of sunshine, and this study found individual Moruga Scorpions that maxed out at over two million SHU’s! That’s 200 times the heat of a jalapeno! I don’t know who eats these things, but would you swallow anything that required its researchers to wear goggles, two layers of rubber gloves and hooded tyvek suits? Really! That’s what they do! Apparently some like it hot.

So Gail and I wandered over to Chile Pepper Institute’s test gardens, and saw the amazing array of peppers they have growing there, scores of varieties, some shown here, our favorite being an ornamental that has little half-inch, fully hot fruits that look like multi-colored Christmas lights, the NuMex Twilight. (You did know a pepper is a fruit, didn’t you?) Sure enough, there in its humble majesty grew the Scorpion, the size of a large strawberry, and even curiously looking like a ripe, sweet one. I could’ve plucked one off with my bare hands, though I might have paid a price for doing so: I had left my tyvek suit in the glove compartment of the car. I might’ve even popped one into my mouth, and as I stood contemplating what such an effort might result in, Gail said, “Don’t let it brush up on your bare legs.” I was in shorts. I backed away. 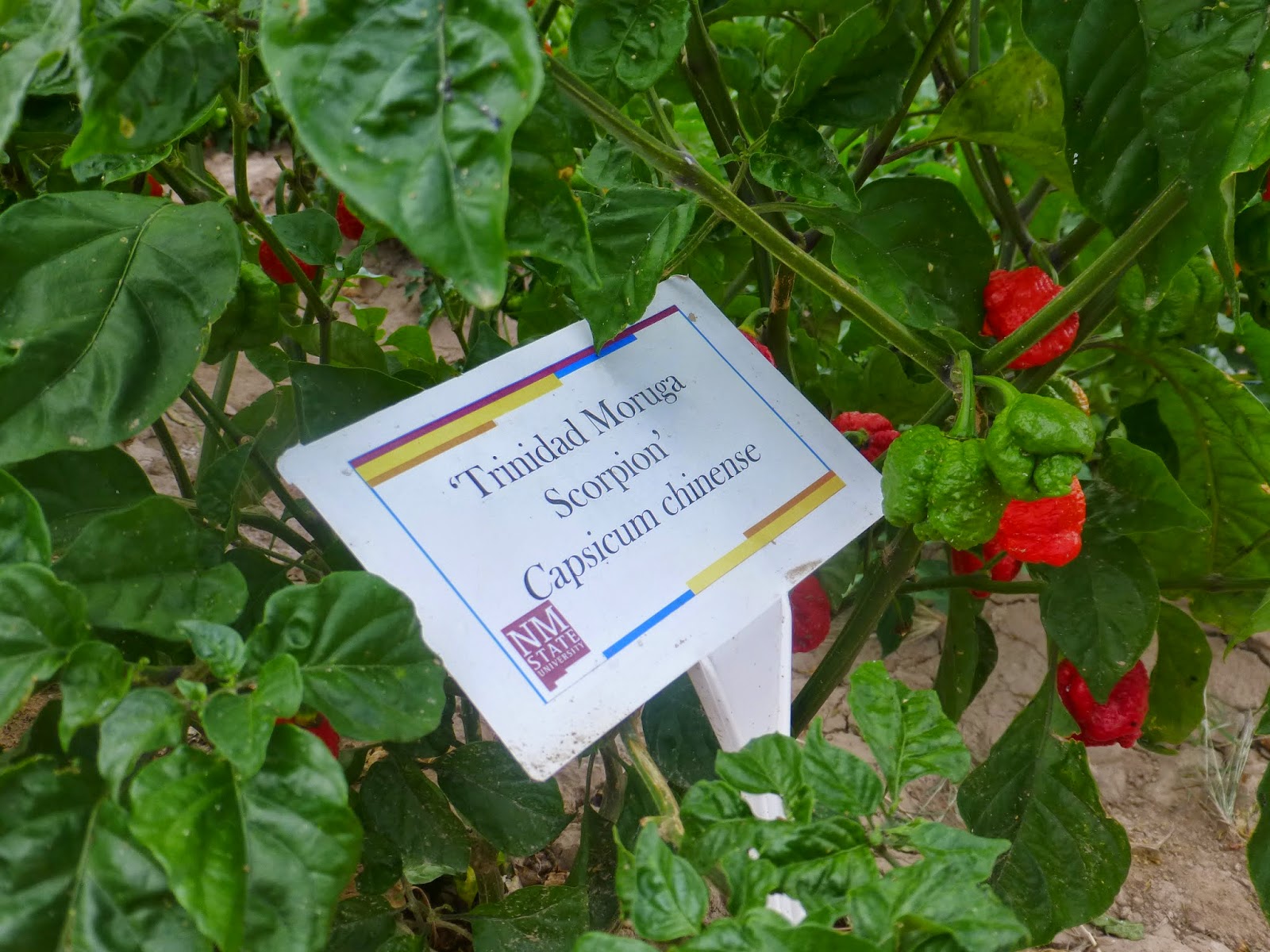 At any rate, the pepper feuds continue to heat up. My son-in-law Jeremy told me a couple weeks ago of a newly researched pepper called the Carolina Reaper that supposedly can average 2 million SHU’s. Now, personally, I think it sounds much better if the record pepper comes from an exotic place like Trinidad or India, don’t you? The Carolinas should never get credit for something like this, especially when they already own bragging rights as the pecan praline center of the universe. As it should be. I asked an institute worker about the Reaper, and she said they have not tested it and are trying to decide if they even will – that it is actually a modified product not grown naturally as the Bhut and Scorpion are. (Leave it to Americans to try to snag the world record!) So I’ll wait for the Chile Pepper Institute to do its own testing, if it ever does. Because who are you going to trust in the pepper world? Someone in a Ralph Lauren polo shirt from the east coast? Or someone from New Mexico in cowboy boots? I’ll trust the guy or gal from New Mexico every time. 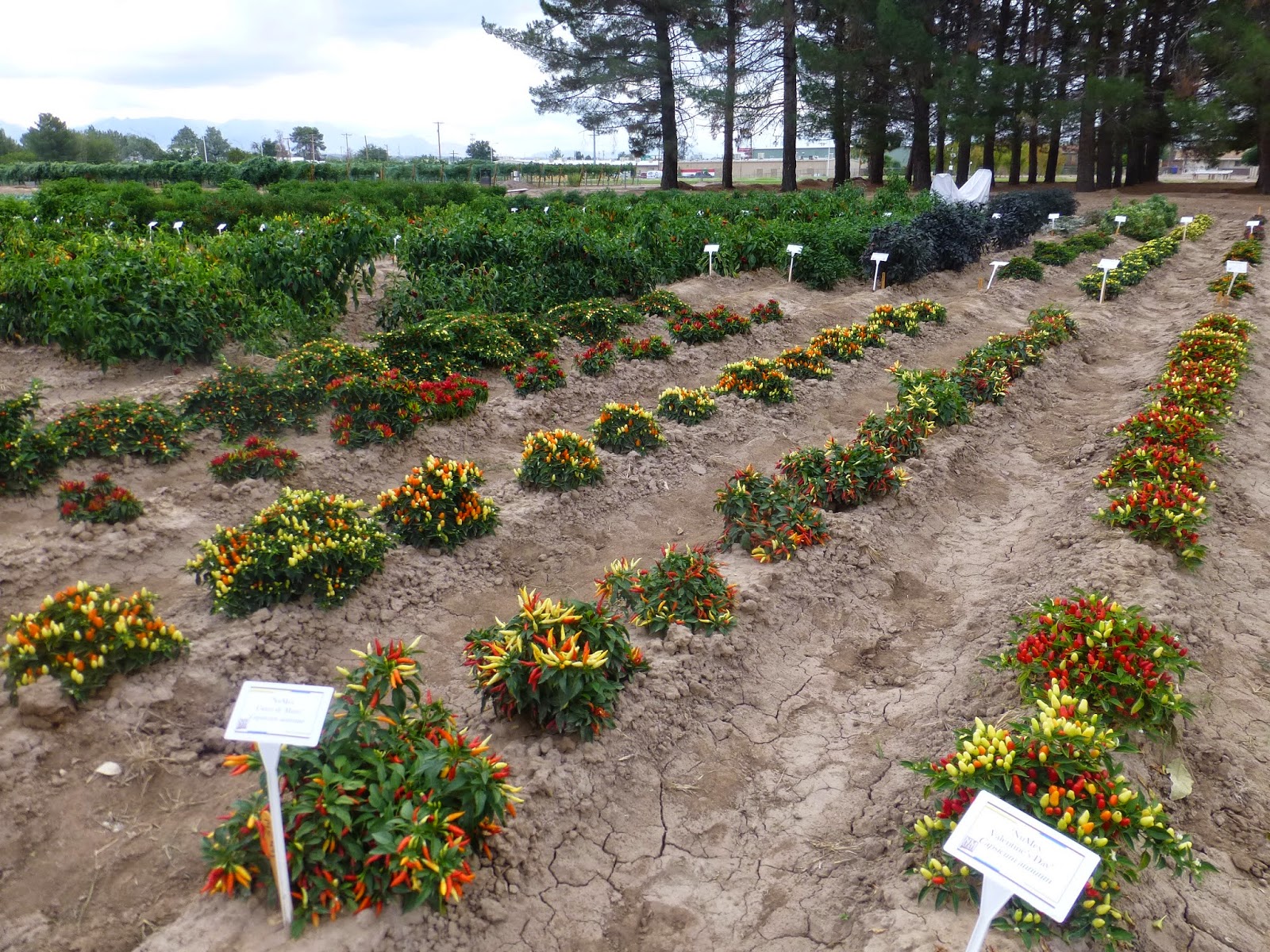 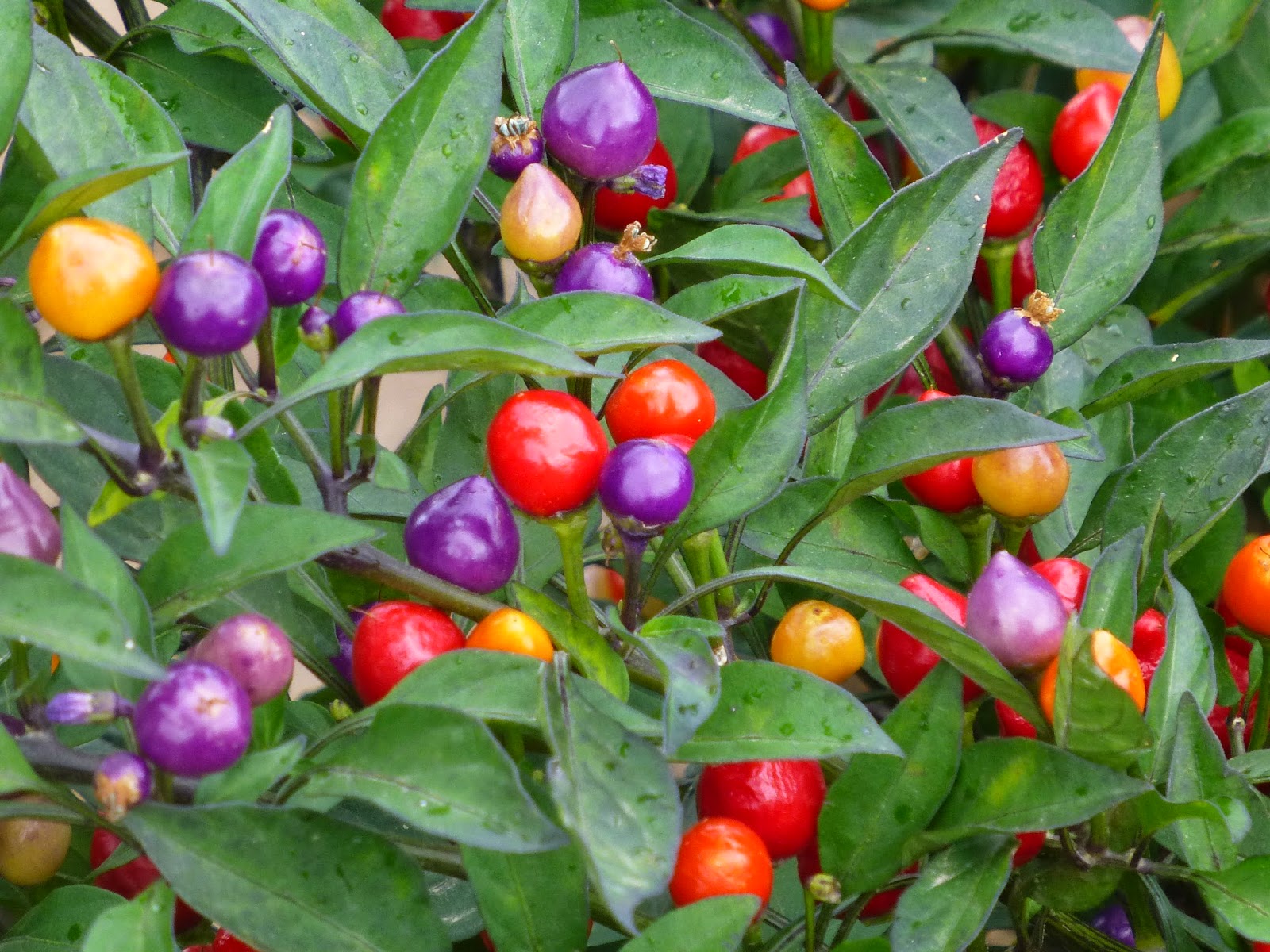 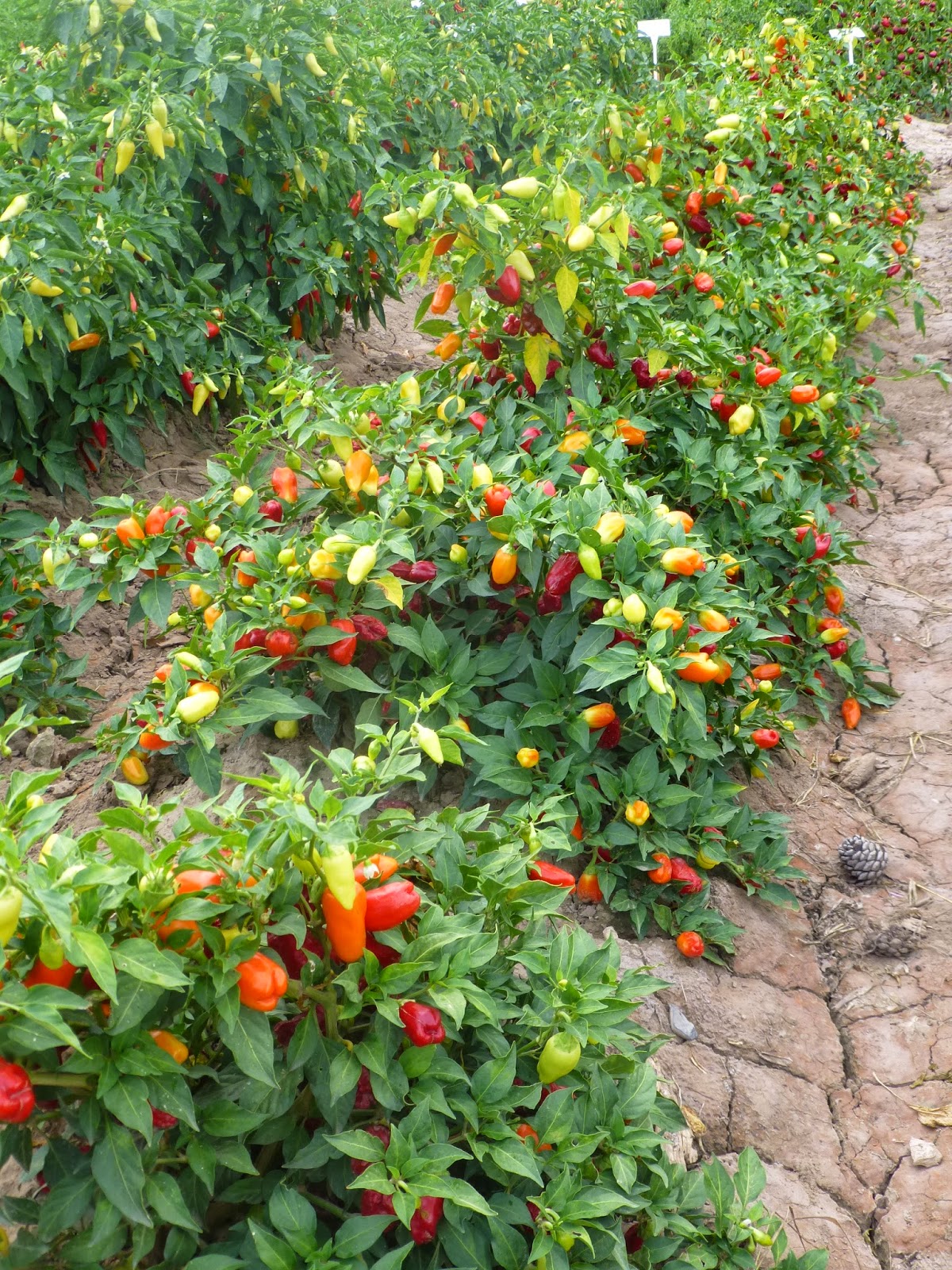 “Eat what is set before you,” the Apostle Paul says, in urging Christ-followers not to show judgmental religious impartiality to forbidden foods (1 Corinthians 10:27). Luke, the writer of Acts, said the early church gathered together in homes to share meals, partaking of their food “…with glad and generous hearts.” (Acts 2:46) Even the Prophet Isaiah gets in on the act: “…Eat what is good, and let your soul delight in the richest of foods!” (Isaiah 55:3) I wonder if these instructions might be any different if Bhut-Kickin' Brownies and Moruga Scorpions were on the menu. But a few nice garnishes of green chiles with my motzo balls or leg o’ lamb? Now that’ll work.