From My Nature Journal: It's a Big Place out There...

Ever since I was a child I remember lying back on the grass on warm summer evenings, looking up at the stars, and saying with King David in Psalm 8, “When I consider thy heavens, the work of thy fingers, the moon and the stars which thou hast established, what is man that thou art mindful of him, and the son of man that thou dost care for him? Yet thou hast made him little less than God… (vss. 3-5).”

Some have looked at that same sky and have found themselves discounting the existence of a personal God, what with the vastness of the universe and all; maybe a God could exist who created all of this, but he surely could not trouble himself with the minutiae of me. On the contrary, I have always found David’s confession to be my own: I don’t get it, I don’t know why he’d want to do it (except for love’s sake), but somehow, when it comes down to it, God both knows us and cares for us. Of that I am certain.

…Maybe a God could exist who created
all of this, but he surely could not trouble
himself with the minutiae of me.

It’s this constant source of amazement that has made me a skywatcher ever since my youth. In fact, I had cause to celebrate Psalm 8 again just this week while trying to spot Comet Lovejoy last Sunday night.

What always blows me away, however, is just how big it is out there. So I thought I’d blog this week on some of the celestial objects David himself might have been considering, using some illustrations I ran across years ago for which I do not have a source. I’ll start out with this one, an illustration I call “It’s a Big World out There…” 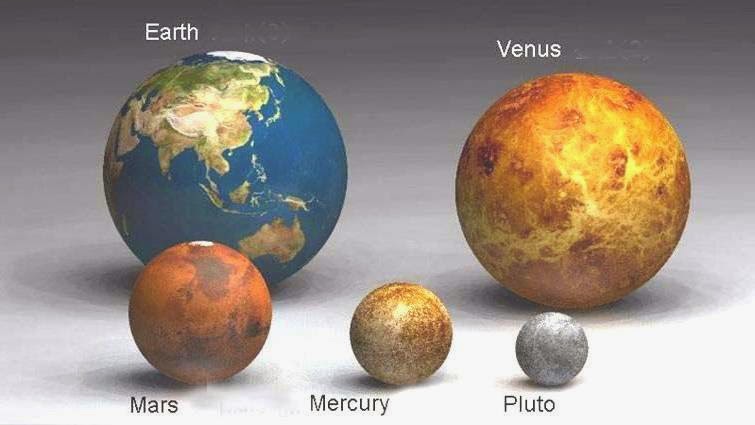 You can see how much larger Earth is than most of the other planets in our solar system. By the way, if you read this post soon, check out the low western sky about an hour after sunset: the incredibly bright ‘star’ is actually the planet Venus, and the tiny and much dimmer light nearby, a little bit lower and to the right, is Mercury. It’s a rare naked-eye evening conjunction of these two inferior planets, and an exceptionally lovely sight while the sunset’s color still hangs tight against the horizon. (An inferior planet is one in our solar system inside Earth’s orbit around the sun.) Get out and see these soon, though, as the show won’t last long. In fact, in my experience, it is really, really hard to see Mercury at all with the naked-eye, especially when it’s not close to something that helps us pin it. Ready for the next one? I call it, “…Or Not!” 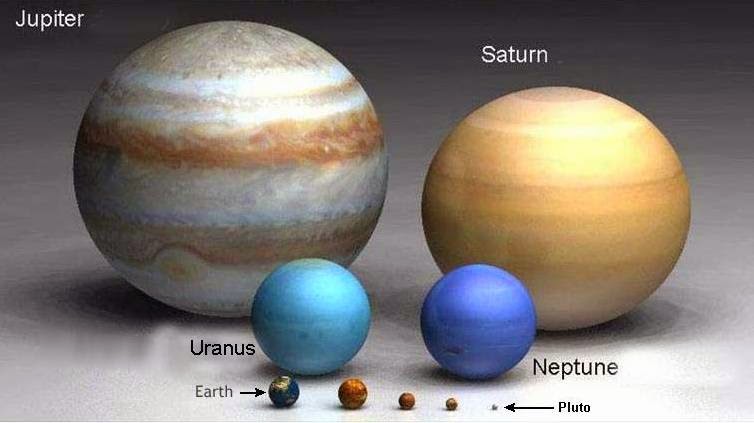 The gaseous superior (outside Earth’s orbit from the sun) planets are enormous compared to Earth. It can almost give you an appreciation for why Pluto was demoted from planet status in 2006. Yet I hear that support is gathering that might allow the little guy to make a comeback soon. Stay tuned. Here’s the next one that I title “But Jupiter’s Not So Hot Either...” 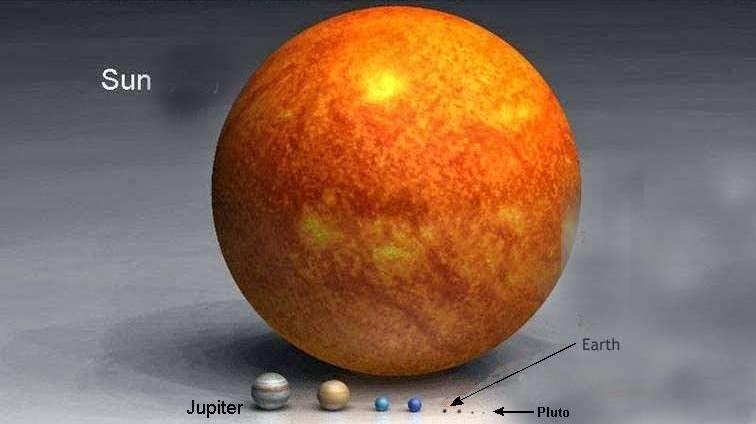 We can hardly fathom the size of our favorite star, by volume equivalent to 1.3 million earths. It makes even Jupiter look more like a marble compared to a beach ball. And heat? The sun’s varies, twenty-seven million degrees Fahrenheit at the core and four million in its coolest spots. But you probably know where I’m going next, though. I call this one “…Because It’s a Big Galaxy Out There.” 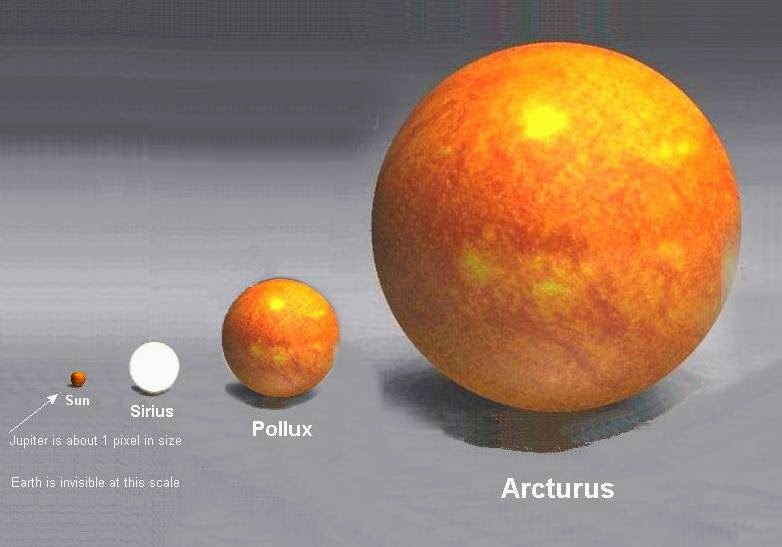 Our sun is actually on the tiny size as stars go, and exponentially cooler than the hottest. Sirius is the ‘dog star’ in the constellation Canis Major, The Big Dog (yes, there’s also a Little Dog, but he naturally gets no billing…); Sirius is also the brightest true star in the sky (the planets Jupiter and Venus can appear brighter), and can be found to the lower left of winter’s popular Orion the Hunter. Pollux is one of the twin stars in Gemini, The Twins. Arcturus is in the constellation Bootes the Herdsman, and can always be easily found by following the arc of the handle of the Big Dipper when it is high in the sky (“Arc to Arcturus”). We’ve got one more to go, though: “Actually, It’s all Relative.” 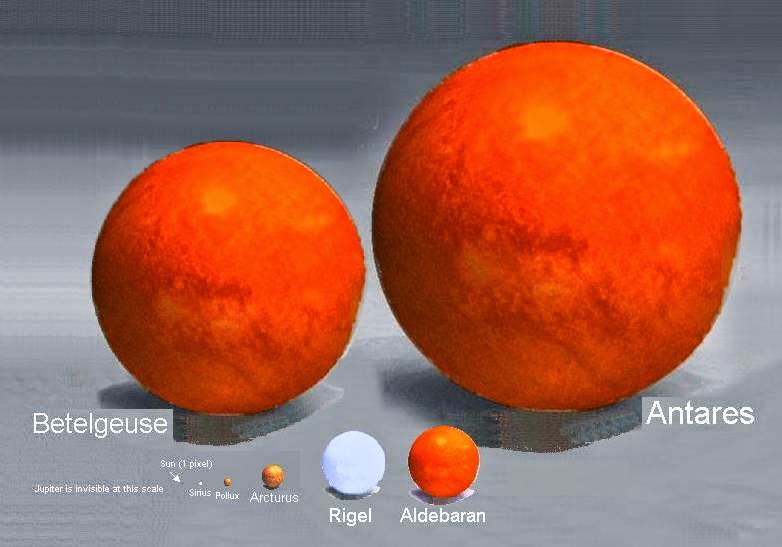 Rigel is the bright, bluish star in the lower right of Orion. This constellation is high overhead in the evenings right now. Aldebaran is the reddish star that constitutes the eye of Taurus the Bull, also directly overhead on early winter evenings. Betelgeuse is the red giant in the upper left of Orion, and huge Antares is the red ‘heart’ of Scorpio the Scorpion, low in the south in the summer evening sky, often confused with ‘The Red Planet’ Mars. Of course, a star’s apparent brightness is always relative to two things: its size and its heat intensity (blue-white stars are hotter than red). But more than this... From our perspective, it is the star’s distance from Earth that plays the biggest part. So obviously, that’s why smaller stars can appear way more luminous to us than larger, hotter ones. Most people cannot see the star closest to Earth, the weak Proxima Centauri, less than five light years away. Sirius, the brightest in the sky, is about nine light years distant. However, it is hundreds of thousands of times smaller than Antares: Antares is likely one of the largest stars in our galaxy, but it is over six hundred light years away, and is a cooler red star compared to the white-hot blue Sirius, so to us it’s only the fifteenth brightest in the night sky.

Even the Bible got that one right, though: “The sun has one kind of splendor, the moon another and the stars another. And star differs from star in splendor (1 Corinthians 15:41).”

By the way, I was successful at spotting Comet Lovejoy last Sunday. It has been cloudy ever since, so another opportunity has not afforded itself. But that night I needed binoculars to do it, and Lovejoy was just a fuzzy ball, not the tailed comet I had hoped to see. Still, it was fun to find, blazing through what would be our constellation Taurus. On the night I observed it, it was about fifty million miles away -- about half as far away as the sun is from us -- and actually heading toward its solar encounter later this month. From there, it is always interesting to see what impact perihelion will have on a comet. (Perihelion is an object’s closest meeting with the sun.) Once the skies clear (tonight?), I’ll try to keep my binocs pointed its direction in the days ahead, all the while praising my Creator:
“Oh, Lord, our Lord, how majestic is thy name in all the earth! (Psalm 8:1, 9)”

P.S. If you’re interested in spotting the comet, here’s a URL sky map that’ll give you the way to find it in the next couple weeks. It’s barreling past and to the right of the Pleiades this weekend.

Posted by Rick Mylander at 8:13 AM