QOTM* -- Dag Hammarskjöld: Peace at the Center and the Power of Nature to Undo Us

In the church crowd I ran with while growing up, and on into my seminary days, it was not unusual to hear quotes by Dag Hammarskjöld. A name like that alone was memorable enough to a kid surrounded at the time by few others than Johnson, Hansen, Nelson, Larson, Anderson and Peterson. But even Hammarskjöld himself was a Swede, and a real one, from Sweden itself, unbeknownst to me. 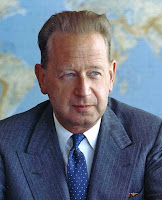 A regional political and then world leader of the mid 1900’s, one rarely hears him quoted today, and this is a pity. He was an extraordinary man. Reluctant though remarkable leader, self-questioning, well-acquainted with the loneliness of leadership, even the periodic loneliness of life, yet deeply Christian, I find that the more I know of him the more moved I am. His musings strike a chord in my own spirit.

Dag Hammarskjöld served two elected terms as Secretary-General of the United Nations, the second in the U.N.'s history, and died what always seems to us a premature death at the age of 56, in a plane crash while on a UN peacemaking mission to Rhodesia in September of 1961. All his adult years he had kept a journal in which he had recorded personal thoughts and insights, some poetic, about hope, faith, doubt, and life in general, as well as some Bible verses and random quotes of others that were meaningful to him, all within the context of a lifetime of public service. It was published posthumously as a book in 1963 under the Swedish title Vägmärken (literally, Trail Marks), and translated into English as Markings. This selection is from a late entry titled, simply, 8.4.59.

In the point of rest at the center of our being, we encounter
a world where all things are at rest in the same way. Then a
tree becomes a mystery, a cloud a revelation, each man a
cosmos of whose riches we can only catch glimpses.
The life of simplicity is simple, but it opens to us
a book in which we never get beyond the first syllable.

It’s a lovely observation, and this even in the midst of his frenetic and intense service as Secretary-General. He knew, as do others, that in the midst of overwhelming challenge, what’s at the center is what counts – a place of peace, of centeredness, where nature inspires, where mystery cheers, and where even very common things reveal deep truths. Such is the place where one is emboldened to find courage, reassurance and strength for the journey. Yet here, also, we realize we are ever but children in the school of life.

I am glad to have discovered that centered place, and yet shake my head in awe as I am undone again and again by the profundity of beauty and the wonder of God’s creation.

While I’m in Markings, here’s another beautiful excerpt, no extra charge. Titled July 6, 1961, it was penned mere weeks before his death.

Tired
And lonely
So tired
The heart aches.
Meltwater trickles
Down the rocks.
The fingers are numb.
It is now,
Now, that you must not give in.

On the path of the others
Are resting places,
Places in the sun
Where they can meet.
But this
Is your path,
And it is now,
Now, that you must not fail.

Weep
If you can,
Weep,
But do not complain.
The way chose you –
And you must be thankful.

P.S. With this blog entry, I return to a writing format I’ve not used in a couple years, my quote of the month. This is not an indication that I will necessarily start doing a monthly quote piece again, as I used to do regularly. But who knows? We’ve just come into a little more time on our hands these days than we’ve had lately, so maybe I’ll be able to get to more than one posting a month, which has been my modus operandi of late. Either way, grace and peace to you…

Posted by Rick Mylander at 6:52 AM