From My Nature Journal: A Smile in the Sky, And Other Things to Grin At

Of particular pleasure to most naturalists are the moments they see something they've never seen before, along with the thoughtful realization that they might never see such a thing again in their life. Now, interestingly, these 'seeings' are not particularly rare, as there is so incredibly much to observe on, under and above land, sea and sky, especially if one is a generalist like me. Such delights are the compensation or remuneration of what is called 'paying attention.' And it's the 'paying' part of that phrase that I like, because their return in value, if you will, are commensurate with the investment of the attention one pays.

The seeings range from the curious to the cute, from the nearly unbelievable to the believable but still spectacular.

The curious. It rained buckets after dark the night before last, nearly three and a half inches in four hours. At one point, as I stood at our bedroom window for a few moments staring at the awesome sight of the downpour amid intermittent lightning flashes, I noticed several tiny glow worms on what had to be absolutely sopped turf, lighting up and dimming back. It left me inquiring as to the purpose. Who knows? Perhaps they were just sending SOS's. (See one of my earlier posts, "Holy Buckets in the World is That?" for a similar curiosity.)

The cute. Over the last couple weeks, Gail and I have picked wild apples several places, making a little jelly and applesauce along the way, but more to fill a couple five-gallon buckets and set some out overnight for the deer. This week as we began doing so, the apples were gone every morning, and we sat at the window eating breakfast, smugly satisfied to have provided a little treat. (Sometimes we're rewarded with them coming in at dusk while we can watch them, always a pleasure.) But no. One morning upon an earlier rising than usual, I watched with both displeasure and amusement as a diminutive red squirrel climbed the stumps upon which the apples lay and carried each, one at a time, into the woods, burying them under fallen leaves. Some of these apples were over half its size and surely close to its body weight, a comical sight.

The nearly unbelievable. I'll warn you now, people think I'm pulling their leg when I tell them of this experience. Years ago, Gail and I celebrated our 25th wedding anniversary with a trip to the Canadian Maritime Provinces. While hiking in a remote area of New Brunswick near the Hopewell Rocks, we stopped dead in our tracks when we heard a crow in a tall tree above us seeming to sing "It's a Small World After All." Now, we had known that crows are smart enough to mimic, but it still challenged our limits of believability. So we stood under the tree for a few minutes and listened to it over and over; quite soon, other hikers came down the trail, a young couple, and we thought we'd put it to the test. Stopping them, we asked if they'd mind pausing to listen to this crow and tell us what they thought they heard; we must have seemed like crazy old people. After the crow called, the woman replied, "Uhh, it's... a small world after all...?" Bingo. Something else crazier than us. We all laughed with incredulity, and I commented, knowing also that some crows can migrate south for the winter, "I guess there's no question where this guy spends his winters!" It must have been one of those that perch nearby and snag French fries and other treats out of people's hands while they're waiting in line at Disney World, listening to that infernal ditty! Who (or what) EVER can get THAT brain worm out of their head, having once stood in that line?

Finally, the believable but still spectacular. I was not even familiar with these two things before seeing them, and though I've only 'seen' the latter through my sister, they arrest me just the same. Many of us have seen sundogs or glorioles. Sundogs are small arcs of rainbow color, 22 degrees either or both sides of the sun when low in the sky, refracting and separating the colors of the sun's rays as a prism does, through suspended ice crystals. Glorioles are rings around the sun or moon (or partial rings) that are also a refraction of light through high altitude ice crystals. But the thing about both sundogs and glorioles is that their arc bends toward the light source, whether sun or moon; in other words, they appear as circles, or partial circles, surrounding the light. 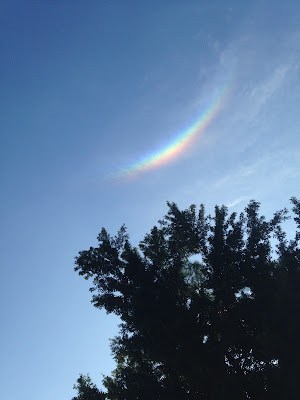 One day as I walked on a sunny afternoon, a small patch of color near the zenith somehow caught my eye, and I found a small, single arc floating among the clouds almost directly overhead. I thought it odd to see a sundog in that spot, as they usually present themselves nearer the horizon earlier or later in the day. But then I realized its arc was bending away from the sun. What in the world? Well, that was called, I found as I researched later, a circumzenithal arc, but I also read, Cheshire Cat notwithstanding, that it was also called 'the smile in the sky,' which brought the same to my own countenance. That’s also a much more fun title, I’d say. (It’s also called Bravais’ arc, or an upside-down rainbow.) Circumzenithal means ‘surrounding the zenith,’ zenith being the point straight up. These arcs are also formed through high altitude ice crystals, appear 46 degrees above the sun (about a quarter of the sky), and, I was surprised to find, are not that rare; it’s just that few of us ever look straight over the tops of our heads. In this photo, I blocked the sun by the tree in order to see ‘the smile’ more clearly. 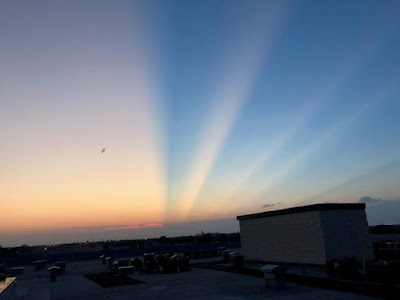 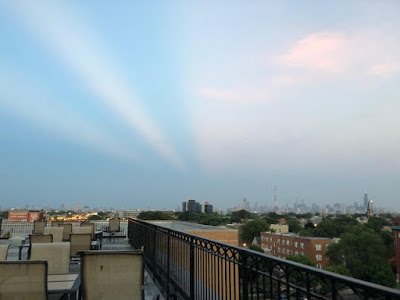 Then just last month my sister Carolyn sent me this photo pair of crepuscular and anticrepuscular rays, taken one evening from the roof of her Chicago condo building. I had often seen the former but never the latter. Crepuscular means ‘relating to twilight,’ which is when these rays tend to show themselves best. These rays can often be seen while the sun is low in the sky, especially as the sunlight shines through thick cumulus clouds. (They’re also called splintered light, or god rays. Hmmm…) But I have always thought that the coolest effect is when crepuscular rays show when the sun is below the horizon. Soon before the sun rises or soon after it sets, our star occasionally throws its shadows and light-rays across the sky as it shines through clouds, or even landforms like mountains or hills, that are below our own horizon, which we, of course, cannot see. All those rays and shadows seem to be emanating from the same point below the horizon, like spokes on one half of a wheel, which, of course, they are, coming as they are from our sun's single point of light. Most spectacular is when it happens when our own sky is fairly cloudless. But I’ve also particularly enjoyed it while flying at high altitude into the sunset, when I have been able to see rays opposite the sunset and behind me forming a single, large, arced, purplish shadow, which is actually the shadow of our earth itself, including its curvature, another cool expression of crepuscular light. What I had never seen before is when those rays reach all the way across the sky and exit the opposite horizon, again, as like spokes in another half wheel opposite the sun. Along the way, they appear to expand widely over one's head and converge again on the horizon opposite. But this is only how it appears; the rays are actually nearly parallel, perspective from a single point being what it is, in the same way that parallel railroad tracks seem to come to a point in the distance). These rays opposite the sun are called anticrepuscular, 'anti' of course a prefix from the Greek designating opposition. Sometimes a ray reaches all the way overhead from west to east (or east to west), as some did at the time of these two photos. You can look at both photos and picture the full sky's connecting rays, keeping in mind that one photo faces west to the sunset and the other east (note the Chicago skyline), thus, why the rays are flipped from right to left.

I wax. It's a hazard for us naturalists, as I've said many times. But all of this is to affirm, as I began, what a treat it is to be feted with new and wonderful things one has never observed or experienced before, irrespective of a lifetime of observation.

I've walked with God now for well over a half century. Though much about this walk has become familiar, God also often teaches or shows me new things, or new ways to understand old things. It's why I write. But such was familiar to the Biblical writers as well, with Jeremiah celebrating God's tender mercies of old which seemed to him absolutely 'new every morning' (Lamentations 3:22-23); or James reveling in God's '...good and perfect gifts from above... coming down from the Father of lights, with whom can be no variation nor turning shadow' (James 1:17). Beautiful image, that one, eh? Or perhaps this from 1Corinthians 2:9 -- 'Eye has not seen, nor ear heard, nor the mind of humans conceive what God has in store for those who love him.'