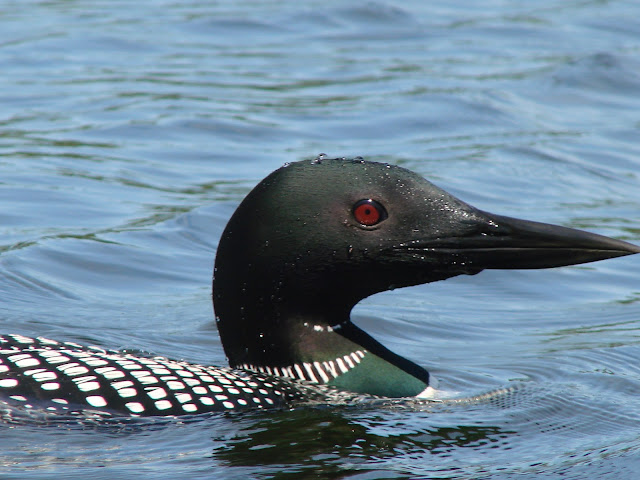 Among the varied beauties of the Northwoods, including the amazing array of its flora and its fauna, and the multiplicity of its landforms, there is nothing that seems to draw out more enthusiasm by the locals than loon watching. People here are passionate about ‘their’ loons, and, here on Beatons Lake in the western U.P., Gail and I often find ourselves fervent participants in that passion. 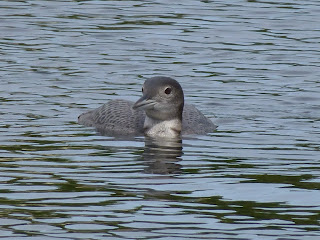 To be sure, we count ourselves uniquely blessed that our lake association has chosen to place one of its two nest platforms in our bay, which graces us with perpetual loon activity early in the season, and then more frequent than normal activity after the typical late June or early July hatch. It is a rare year when at least one chick, if not two, isn’t successfully fledged here before our very eyes. (For an earlier blog entry in which I write more extensively about loons, click here; this entry will concentrate on some other things.) 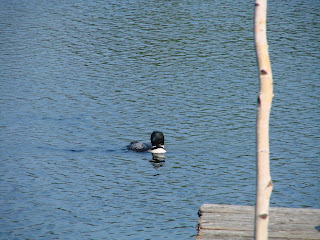 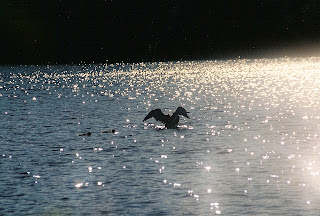 I’ve been keeping track of our lake’s loon success for twenty years now, and we’ve had far greater fledging success since the platforms were placed than prior. What’s a nest platform? In a completely natural setting, a loon will nest onshore in as safe a place it can find; but the eggs in onshore nests are subject to radical predation by raccoons, snakes, skunks and weasels if the parent can be driven off, and the birds themselves are preyed upon by wolves, bears, coyotes and bobcats. A nest platform floats offshore, allowing much greater likelihood that eggs will be successfully hatched. There are still dangers to chicks after hatching both from above and below the water’s surface (mainly eagles and snapping turtles), but fledging success is vastly benefited by offshore nesting. Consider: in the five years I know of before the first platform was placed here in our bay, we had two successful fledgings in five seasons on our lake (average -- .4/year). In the six years that the first platform nest was placed here in our bay, eight chicks were fledged (average – 1.33/year, more than triple the success). And in the nine years that we’ve had the two platforms operative, twenty chicks have fledged (average – 2.22/year, nearly six times the success), including one season (2007) where the two nests produced three fledged loons, and two seasons (2010 and 2013) where they produced four! Nine of these twenty came from our platform and eight from the other, with three chicks successfully hatched and fledged that were born onshore (2009, somewhere on the lake, and 2014 here in our bay); in both of these onshore hatchings, the parents had been driven off after laying their first clutch. 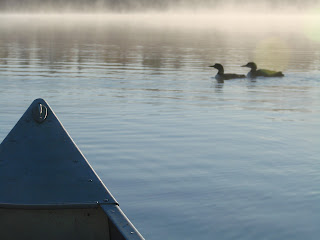 This year, it looks like there will be only two fledged between the two nests, so it won’t meet our nine-year average. Black flies drove both nesting pairs off both nests in late May or early June, but the pairs persisted and each laid a second clutch successfully. I am told that if a first clutch of eggs is two, and the bird must abandon them, the second clutch can only be one; the obverse holds as well – if the first clutch is one and the parents are driven off, the second clutch may be two. On our nest, one egg was first laid, the pair driven off, and then two eggs were laid on the second attempt; only one of these hatched successfully, though. (Our lake’s ‘Loon Ranger’ actually recovered the partially hatched egg after the nesting pair had left the nest for the season, displaying it at our association meeting in August.) The remaining juvenile seems healthy after these two months. On our lake’s other nest island, one egg was first laid and the nest abandoned, then two eggs laid on the second attempt, with two chicks successfully hatched, but within days one went missing to predation; the remaining juvenile also seems healthy and ready for the cold to begin. Both will have to be off the lake by freeze up in late November or December, the parents long gone before that. While it’s on my mind, a quick shout out of thanks to our Loon Ranger, B, for all her good work! 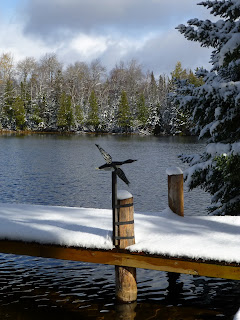 Finally, about the photos... Gail and I can get some pretty cool shots right from the comfort of one of our dock chairs. They come in awfully close when they make their fishing circuit around the bay, and it’s a more rare but very real treat to see them swimming like torpedoes under the dock, turning, as they say, on a dime, as they change directions in pursuit of a meal. If they’re floating or fishing more lazily in the middle of the bay, we can sometimes even call them in by standing on the end of the dock and jiggling our hands at arm’s length. They’re actually curious creatures and will check out a curiosity; of course, it probably also gives our neighbors something to talk about when they see us performing so. The photos here include close-ups of a lovely mature bird and of a three-month old juvenile with indistinct markings, a curious one near the dock, a parent with a chick pair in sun’s shimmer, a pass-by while floating in the canoe, and our whirligig imposter. (No, it hasn't snowed up here yet this year, though we did
have our first frost warnings last night...)