The Bible says that when Jesus Christ returns, those who believe or have believed will rise from the earth to ‘meet him in the air’ (1 Thessalonians 4:16-18). Frankly, I hope I get the chance to meet Jesus on top of one of these. 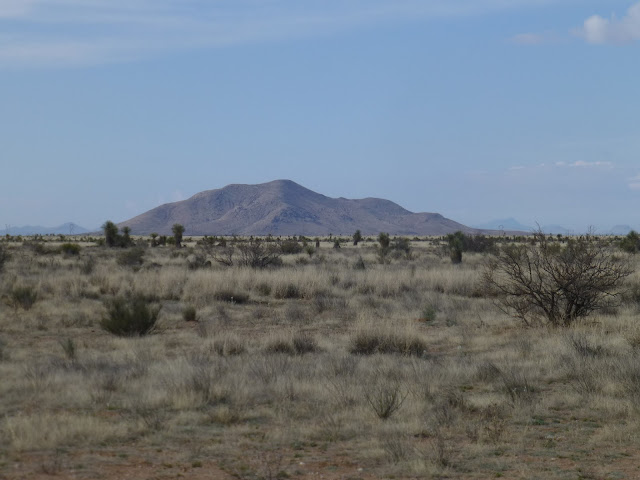 They’re called sky islands – small mountain ranges, or sometimes even singular mountains, that rise up out of the high, flat deserts of southwestern New Mexico, west Texas and southern Arizona. We were blessed to work with a wonderful church in Las Cruces, New Mexico earlier this year and last, and were introduced to them at that time. From any open promontory around the city, sky islands could be seen in nearly every direction; notice numerous of them in the distance in the photo above. (Click the photo and it will enlarge. Black Mountain is the one centered.) And so, hiking in our free time became a curious passion, and we enjoyed many excursions to their lofty, slightly cooler trail systems. Even in such an arid, desert environment, many of them had springs flowing all year at high elevation; the water was always a surprising delight to find, surrounded by an oasis of green and quickly disappearing into the sandy, granitic soil. We found ourselves musing upon the historical and natural drama that must have taken place at that spot over the years.

One of the most curious things about desert sky islands is that their upper habitat differs so markedly from their base that it can host plants or creatures typically found hundreds and hundreds of miles further north. Ascend some of them, and one can move from creosote and mesquite scrubland to grassland to pine forest and finally to conifer/aspen woodland all within a three-mile trek or less. Additionally, some sky islands can even have species completely unique to that range, maybe even found nowhere else on earth, just as happened in places like Australia, Madagascar and New Zealand, or other smaller isolated habitats like Hawai’i and the Galápagos. It’s what biologists call endemism or speciation. In this way, sky islands may more accurately be referred to as habitat islands.

Some are volcanic in origin, others the eroded remnant of earlier and vaster ranges. Some have produced minerals by ancient or modern mining efforts, and others have been void of the same. Some were used as hideaways for native tribes seeking refuge or hideouts for desperados escaping capture, others have hardly had foot stepped on them in their history. Or at least not human foot. One just northwest of Las Cruces contains one of the largest discoveries of in situ prehistoric animal tracks in the world, a place called Prehistoric Trackways National Monument, in process itself of being incorporated into the newly established Organ Mountains -Desert Peaks National Monument.

Here’s an effect I think is quite cool, though, and I remember first seeing it while traveling Interstate 80 in Utah between San Francisco and Chicago. If you’re hiking or driving in the flat desert, and your weather and perspective are such that heat mirages appear between you and the sky island, the range seems to float above ground as in some Tolkien fantasy. 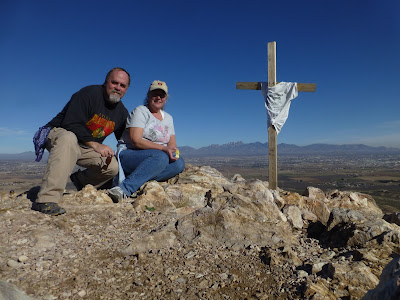 Over our time serving the Las Cruces church, I had occasion to write several blogposts on experiences hiking in sky island ranges, among them June 14 2014 and March 27 2015; if you’d like, click on the bolded dates to take you to a couple of them. (In case you’ve forgotten or never knew, everything bolded in these paragraphs and appearing in blue font is a link to another place of possible interest.) The photo to the right is from the top of the sky island nearest Las Cruces, Picacho Peak, just west of town; in the photo, the range in the distance is the Organ Mountains, lovely, and the city of Las Cruces lies in the Rio Grande Valley between.